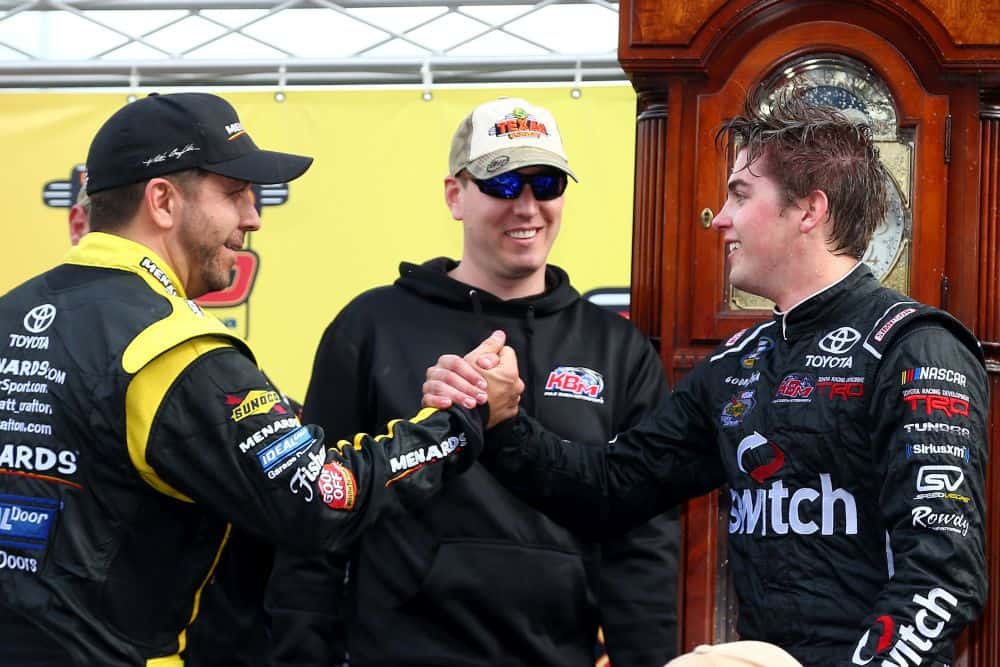 In a Nutshell: Noah Gragson scored his first career victory at Martinsville Speedway Saturday afternoon when he beat Matt Crafton to the checkered flag by 1.486 seconds. The driver of the No. 18 Toyota executed a nearly perfect restart from the outside line with just 10 laps remaining to win the Texas Roadhouse 200. Johnny Sauter finished third, followed by Gragson’s Kyle Busch Motorsports teammates Harrison Burton and Todd Gilliland.

“Thank you to Kyle Busch, Samantha Busch, my crew chief Marcus Richmond, all my crew guys,” Gragson said after his win. “This is crazy. I can’t believe it all. Thank all the fans for coming out – for Switch, Toyota, TRD. Everyone that makes this possible for me – a young kid from Las Vegas who started racing five years ago. To be racing here in the NASCAR Camping World Truck Series, it’s a privilege and all those hours of hard work, I knew to myself this morning, I knew I could get it done. I’ve known it this whole year and I told myself I’m gonna get that trophy today and that’s what we did.”

Who Should Have Won: Anyone watching this race would have expected Crafton to once again celebrate in Victory Lane. After all, he led 102 laps on the day and looked almost untouchable when he was out front. But a late-race caution set up the restart that ultimately cost the driver of the No. 88 Toyota his third win at the 0.526-mile oval when eventual winner, Gragson, took advantage of the outside lane on the final restart of the day and drove away from the rest of the field.

Less than 40 into the Texas Roadhouse 200, Nemechek once again found trouble, something that has plagued the No. 8 team throughout the playoffs this season. The 20-year-old, who is running his second full season in the Truck Series, spun on his own in Turn 2 when he suffered a brake failure going into the corner.

With heavy rear-end damage, Nemechek limped his truck back to pit road but only sat in his stall for a few moments before pulling behind the wall, ending any slim chance he may have had to make repairs and also his day. He was credited with a 30th-place finish, ahead of only Chris Windom, who never turned a lap, and Gray Gaulding, who retired, citing electrical problems after just 26 circuits.

“I really don’t have an emotion right now,” Nemechek said. “It sucks for our team. We had a fast truck and just lost brakes. It never slowed down.

“We’re just going to keep working hard and plugging along and make our stuff as best as we can. That’s all we can do.”

Nemechek narrowly made the Round of 6 after struggling through Talladega with damage two weeks ago. He now sits 28 points behind Ben Rhodes, who’s fourth in the standings. Barring catastrophe for a couple playoff drivers over the next two weeks, the driver of the No. 8 will likely need a victory to move into the Championship 4 at Homestead-Miami Speedway in a few weeks.

“They don’t know what’s going to hit them next week in Texas,” Nemechek said.

Championship leader Bell suffered an uncharacteristically sub-par weekend at Martinsville. He struggled for speed in qualifying and started 15th. Through pit strategy, both by his team and those he was racing against, he managed to find the front of the field for 16 circuits. But his time as leader was short-lived when contact from dominant driver Crafton sent the No. 4 Toyota spinning.

He was able to recover for an eighth-place finish but lost some of the lead he had built up with playoff points throughout the season.

“I don’t know, our JBL Tundra was really really strong throughout the second stage,” Bell said after the race. “I don’t know, kinda apart from that second stage we struggled to get going, but I’m not really sure what happened getting into (turn) 3 there. I thought I left Matt (Crafton) enough room, but overall it was not the day we wanted. We were able to salvage a good finish out of it and got some stage points in the second stage. We’ll move on to Texas (Motor Speedway) and hopefully be a lot better than we were today.”

Bell leaves Martinsville with a slim three-point advantage over Crafton with two races remaining to set the Championship 4.

Thank you @rheem and @MdmMotorsports. Thanks to the guys and @HuffdaddyShane for all the work this weekend. Was a blast ???? #thanksall

Rookie of the Race: Gragson

Playoff Points Update: With a non-playoff driver winning at Martinsville, no one is locked into the Championship 4 yet. Bell maintains the point lead by a slim three markers over Sauter. Crafton is third, followed by his teammate Rhodes. Cindric sits just 11 points below the cutoff line, while Nemechek is a distant 28 markers behind with two races remaining.

Up Next: The Camping World Truck Series, which will race each weekend through the end of the year, heads off to Texas Motor Speedway next weekend for a Friday night special. Coverage for the JAG Metals 350 Driving Hurricane Harvey Relief begins Friday, Nov. 3 at 8:30 p.m. ET on FOX Sports 1; the race can also be heard on your local MRN affiliate or SiruisXM NASCAR Channel 90.