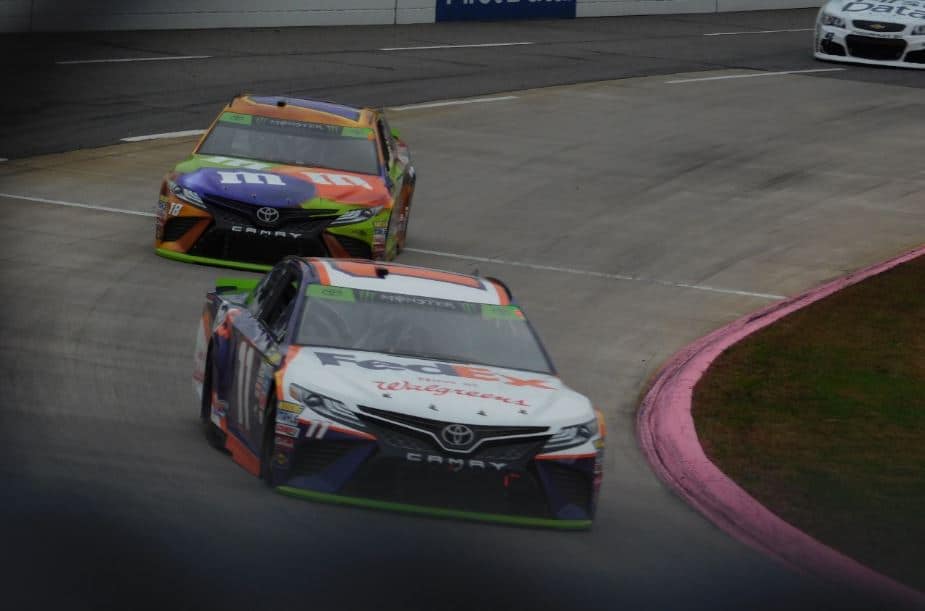 Recall the fall Monster Energy NASCAR Cup Series race at Martinsville Speedway one year ago.  Most fans probably remember Jimmie Johnson winning and punching his ticket to the final round of the postseason.  Finishing third, fourth and fifth were title contenders Denny Hamlin, Matt Kenseth and Kyle Busch.

Despite the top five, Busch was not happy after the race.  The 2015 champion expressed frustration with his Joe Gibbs Racing teammates.  Busch believed that the JGR drivers had been too preoccupied with racing each other cleanly in the closing laps, allowing Johnson to drive off into the sunset.

It seemed that next time, Busch would not be so inclined to play nice.

Fast forward one year, and Busch was the driver celebrating in Victory Lane at Martinsville.  He arrived there by roughing up Hamlin in the final laps, shortly after Hamlin dumped Chase Elliott, and right after Elliott moved Brad Keselowski out of the top spot.  This time, teammates did not matter.

Fans might also recall how Busch and Hamlin raced each other shortly before the end of the second stage.  Busch was dueling with Keselowski for the lead when the pair came upon Hamlin.  The No. 11 car had been running inside the top 10, but a pit road speeding during the previous caution at the end of stage 1 forced Hamlin to restart at the back of the field.

As Hamlin worked his way through traffic, Busch caught him about 30 laps before the end of Stage 2.  With Keselowski baring down on Busch, it seemed like only a matter of time before the No. 18 car would lap the five-time Martinsville winner.

Yet Busch never really tried to pass Hamlin.  He rode behind his teammate for the rest of the stage, resulting in Keselowski getting around Busch and winning his second stage of the race.

Busch’s decision to not lap Hamlin when he had the chance is baffling.  The No. 18 car was one of the best cars on track, but there was no guarantee that Busch would be the one who would ultimately emerge victorious.  His job at that time should have been to fight for every point he could possibly get.  To that end, trapping Hamlin, another playoff driver, one lap down would have made Busch’s race easier.

Even if Hamlin had managed to earn the free pass, he would have had to start at the back of the entire field, again.  Lining up around 36th instead of 13th makes a big difference on any track, but especially at Martinsville, where passing is notoriously difficult.

Busch had the opportunity to bury Hamlin, and he did not take it.

Busch should have also considered the other playoff drivers on the lead lap, fighting him for the stage win.  At this point in the season, there are no more playoff points awarded for race wins or stage wins.  Yet we have seen the difference between advancing and getting eliminated in the Round of 8 come down to a handful of points.

It made no sense to see Busch risk winning the stage (and losing it to Keselowski, perhaps his greatest rival) to cut a teammate some slack.  Given Busch’s frustration last year, the decision to ride behind Hamlin at the expense of his own stage win is inexplicable.

It is fair to wonder if Busch regretted his decision toward the end of the race.  The No. 18 team lost a little speed as the race wound down.

Meanwhile, Hamlin clawed his way back into contention.  As Keselowski and Elliott emerged as the dominant drivers, Busch was trying to hold on to a top five spot, and probably wondering how many points he would be above the cut line without a win to fall back on.  Then, after a few quick cautions, Busch found himself with a chance to win on an overtime restart, lining up second – to Hamlin!

Perhaps Busch, knowing that he did not drop the dagger when he had a chance earlier, raced Hamlin with a little more aggression.

Teammate politics are nothing new where NASCAR’s playoffs are concerned.  The most infamous example occurred at Richmond Raceway in 2013, when Clint Bowyer intentionally spun out to help then-Michael Waltrip Racing teammate Martin Truex Jr. get into the Chase.  Talladega Superspeedway always features its share of cooperation between teammates and manufacturer alliances.

However, racing a teammate week-in and week-out is more about informal courtesies.

If teammates are racing each other for position, and the trailing driver is clearly faster, it is customary for the lead car to let the teammate pass.  At Martinsville, fans have also seen the JGR and Team Penske drivers manage the front row on restarts so that teammates can maintain the top spots.  In a more general sense, the idea is for teammates to not hamper each other’s efforts to win the race.  Yet, ideally, all bets are off when the race is on the line.

The real question is, at what point during the race do the informal teammate courtesies get put aside?

The closing laps of this year’s fall Martinsville race were clearly every driver for themselves.  Busch must have decided that roughly halfway was too early to try and lap Hamlin.

In last year’s event, Busch seemed to think that the last 100 laps of the race should have been more of a free-for-all, while Hamlin and Kenseth perhaps did not.

Teammates have the right to decide how far the limits of being teammates should go.  Fans have a right to question those decisions.  With Sunday’s race and a ticket to Homestead on the line, Busch, Hamlin and their peers were not thinking about who was who’s teammate.

Yet that was clearly not the case earlier in the race.  Busch was lucky to dodge the chaos at the end of the race.  He was also lucky that his decision to ride behind Hamlin 250 laps earlier did not cost him a grandfather clock.