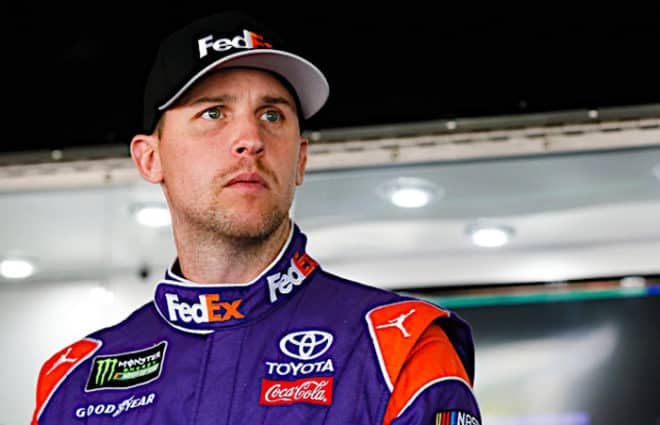 Context and nuance are two words that have all but been lost in today’s society.

You’re either on one side of an argument or you’re on the diametrically opposed side and never the two shall meet.

Social media has fueled the acrimony, fanning the pungent flames of discourse almost to the point that any sort of rational conversation proves impossible. Nowadays, it’s often the person that shouts loudest and longest that wins the day. Debate, for all intents and purposes, has become a dirty word.

And so it goes in the case of Denny Hamlin and Chase Elliott under the lights (the lights!) at Martinsville Speedway this past Sunday.

If you’re in the camp of next year’s Most Popular Driver, you’re absolutely appalled at the punk (insert your own multiple swear words) move by the number 11. You’d say there’s no doubt even Hamlin’s own hometown fans let him know that in the post-race coverage. He is the worst thing, and forgive me Joey Logano, since un-Sliced Bread.

But if you’re a Hamlin fan, you’re standing by him. You watched your driver fight back from yet another pit road speeding penalty at the start of stage two to push himself all the way into contention for an unlikely win. It’s one that had huge championship implications and a place in the Championship Four. So, you understand why he made that move; heck, you probably applaud your driver for it.

Twitter was predictably incandescent post-race with fans of Elliott sounding off through intense, prolonged, and vituperative rage. Hamlin’s defenders, outside of a few fans and commentators were few and far between.

Without question, the Virginia native will hear it next Sunday from the Texas Motor Speedway crowd. He’ll be booed lustily for some time to come, perhaps even the duration of his career. He’ll join Logano and Kyle Busch (who gives not one iota what people think) in a trio of pantomime villains.

Now clearly, Hamlin punted Elliott for the lead. He admitted as much on Twitter.

It was a dirty move but it was a move nonetheless we’ve seen from some of the greatest drivers in our sport. And it’s a move we’ll see again just as the sun, God willing, will rise tomorrow. We might even see similar contact to win it all at Homestead-Miami Speedway.

The sample size of races in NASCAR’s elimination format is still too small to suggest airtight conclusions yet you can all but guarantee we’ll see it again this time next year. We had Carl Edwards and Logano at Homestead last November, Matt Kenseth vs. Logano at Martinsville in 2015, the Kevin Harvick debacle at the conclusion of the 2015 Talladega race and in 2014, it was Brad Keselowski vs. Kenseth in a between-the-hauler brawl. It’s the NASCAR the powers that be drew up. It is, as Bruce Hornsby once sang, just the way it is.

Where Hamlin went wrong was not admitting his mistake right away. He should have owned it in the moment. As a 31-race winning driver, he’s too good – especially at Martinsville, where he’s earned five grandfather clocks — not to know exactly when the clock struck midnight. In the moment, with the adrenaline in full flow, he gave an interview he must have known was fallacious even as the words were escaping his lips. He should have said, “Yeah, I dumped him. I wanted to win. I wanted to stamp my ticket to Homestead.”

But for those who say his post-race statement was PR spin, I’d respectfully say you don’t know much about this driver. Hamlin has always spoken his mind, from the start of his career, opining on controversial issues with a strong point of view whether it’s the popular one or not. This veteran, after all, is a guy that was a driving force behind the Driver’s Council which has undoubtedly been a benefit to his fellow wheelmen and women.

Some in and outside the garage, including NBC’s Dustin Long say he shouldn’t even have to apologize given the format. And what might the reaction have been if Chase had dumped Brad into the wall? As it was, Keselowski recovered but how might that have looked in reverse.

“We’ll never know” is the truthful answer here. We’ll only know if that moment reoccurs. And given the way things have gone in the four years of the three-cut format, this contact will happen again, perhaps every year with different drivers.

Where does this incident leave us, then? Well, both wheelmen have uphill climbs to make the Championship Four, with Chase’s own route much more vertiginous.

But there’s hope for the sophomore in the midst of struggle; the No. 24 has been a top-five car this postseason. And after all the second places, next week wouldn’t be a bad time to finally get that first victory. It has been coming, after all, and the No. 24 has looked racy on the mile-and-a-half tracks in this Playoff.

Hamlin, meanwhile, will be booed for a while and, like Kyle Busch, I suspect it will be water off a duck’s back. He is not a driver that came from privilege, and is aware of the struggle, of what his parents and himself sacrificed for this opportunity. For much of his career, Hamlin has disproved the odds. Don’t expect that to change just because he’s badly received at driver introductions. He’s made of tougher stuff.

And as for Elliott, the son of a Hall of Fame racing legend, it will be interesting to see where he goes from here. The young driver showed a level of emotion we haven’t seen thus far in his short career, expressing his very clear displeasure on the cool-down laps by knocking Hamlin’s car to the wall. Does he take a moment to exact revenge, perhaps at Phoenix? Or, can he channel that anger into racing his way back into contention this season?

Actions speak louder than words; they always have and they always will. Where Chase Elliott goes from here might just say a lot about the type of driver he’s going to become.

TWO: Next Up, Texas

Next up, we head to the lightning fast Texas Motor Speedway for the second of three races in the Round of 8. The Fort Worth-based mile-and-a-half circuit has 20-degree banking in Turns 1 and 2 with 24 degrees of banking in 3 and 4. The home of two Cup races each year, the 1.5-mile oval is the only intermediate that holds dual 500-mile events.

This will be Cup race number 34 at the track, a streak that extends back to April of 1997 with the inaugural race being won by now NBC Sports commentator Jeff Burton. Jimmie Johnson won the spring race and, not surprisingly, is the most successful driver at Texas, winning seven times.

But don’t count out the Joe Gibbs Racing trio of Matt Kenseth, Kyle Busch, and Denny Hamlin, each of whom have a pair of victories. One name to look out for, too, might just be Hendrick Motorsports’ Chase Elliott. In three starts in the Lone Star State he’s finished fifth, fourth, and ninth.

As anyone who’s read this column on a regular basis would know, I’m always keen to highlight great new NASCAR advertising. In recent years, we’ve seen a dearth of really good work or we see a once-promising spot that is played to death throughout the entire season. That makes the one quality ad essentially ruined long before we even make the Playoffs.

With that in mind, this piece for Mountain Dew is something that’s worth celebrating.

The version on the link above is a full two-and-a-half-minute effort. Shorter spots will run in broadcast, as we saw in the Martinsville race this past weekend and also during the World Series. Over the years, Mountain Dew has created some really memorable and funny NASCAR work and this commercial is another great example.

Congrats to the team. I look forward to the encore.

In a race that was decided by what happened in the first couple corners, and with two races left to run on the 20-race 2017 calendar, Lewis Hamilton emerged from the race in Mexico to claim his fourth Formula One title. The total equals France’s Alain Prost and Germany’s Sebastian Vettel on a list the 32-year-old Hamilton is rapidly climbing. Ahead of him now sits the legendary pair of Juan Manuel Fangio with five titles and Michael Schumacher with seven.

It remains to be seen just how many Hamilton can win but with this title, he has now taken one more than the British motor racing icon Jackie Stewart. There might just be a knighthood in his near future as Sir Lewis will have a nice and deserved ring to it.

Finally, once again the slowest, shortest, and most venerable track in NASCAR hosted another terrific race. And wasn’t it fantastic to see it all conclude under the lights although those shivering in the stands might not agree. With the preponderance of cookie-cutter tracks on the schedule, I cherish our all too infrequent visits to the short tracks and the lil’ old paperclip in particular. May it always, always stay on the schedule.

I’m already looking forward to the next visit and the inevitable fireworks.

Danny starts his 12th year with Frontstretch in 2018, writing the Tuesday signature column 5 Points To Ponder. An English transplant living in San Francisco, by way of New York City, he’s had an award-winning marketing career with some of the biggest companies sponsoring sports. Working with racers all over the country, his freelance writing has even reached outside the world of racing to include movie screenplays.
@dannypeters
Previous Beside the Rising Tide: Keep it Simple, Stupid
Next DragonSpeed to Move Up to WEC LMP1 for 2018-2019 Season