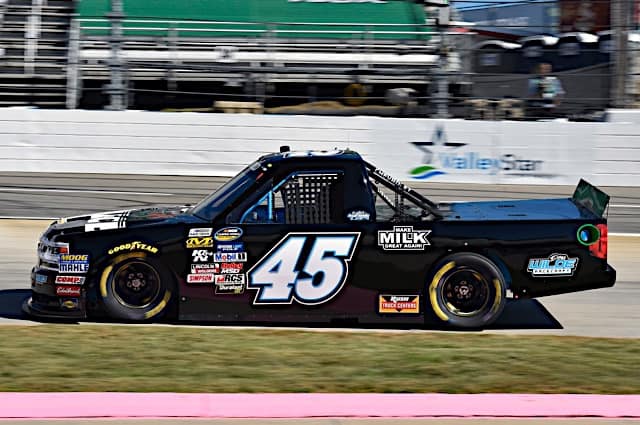 For the Camping World Truck Series, 32 trucks are entered in Friday night’s JAG Metals 350.  As a result, no one will fail to qualify.

There are a couple of driver changes of note.  At Niece Motorsports, Austin Wayne Self will drive the team’s No. 45 Chevrolet, replacing Jeffrey Abbey.  The move allows Self to further acclimate himself to his surroundings.  Recently, Niece Motorsports announced that Self will drive the No. 45 Chevrolet full-time in 2018.  AM Technical Solutions will serve as the primary sponsor this week.

Tyler Young returns to the No. 20 Chevrolet in place of Jeb Burton.  Young’s regular sponsors (Randco Inc. and Young’s Building Systems) will be on the truck while Austin Hill drives the No. 02 Ford.

Tommy Joe Martins will return to the series in order to race the No. 42 Chevrolet.  Diamond Gusset Jeans will return to serve as Martins’ primary sponsor.  The No. 44 that Martins has been helping out on this season (and normally driven by the aforementioned Self) will be fielded by Faith Motorsports will have Ted Minor at the wheel.  Minor will be running a special graphic honoring those lost in the Harvest 91 Festival shooting in Las Vegas.

Myatt Snider will be back in Kyle Busch Motorsports’ No. 51 Toyota this week, replacing Harrison Burton.  Burton is still too young to race on intermediate tracks.  Liberty Tax Service will serve as Snider’s primary sponsor.

Landon Huffman, who finished 19th at Martinsville for Copp Motorsports, will drive the No. 63 Chevrolet for the Mittler Brothers this week.  Huffman replaces Chris Windom, who had engine problems last weekend.  At Copp Motorsports, Todd Peck has been tapped to replace Huffman.