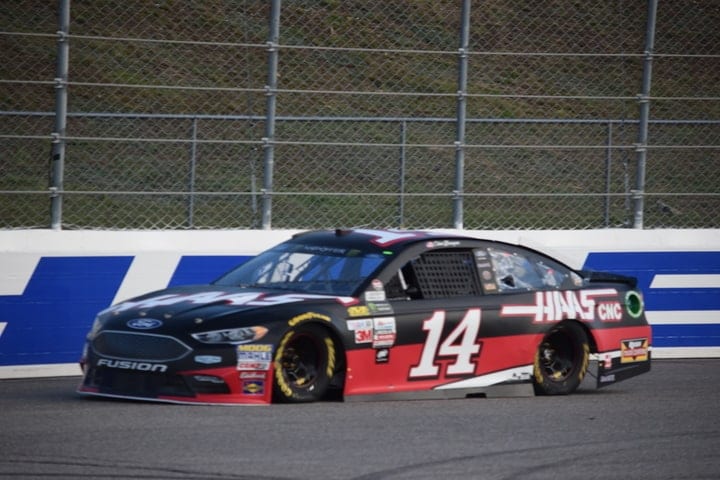 On Wednesday, NASCAR released their weekly Penalty Report from Martinsville.  In it, an L1-level penalty was assessed to Clint Bowyer‘s No. 14.  In post-race inspection, Bowyer’s No. 14 Ford was found to have simulated weight for the in-car camera that did not meet specifications.

What this means is that the in-car cameras that Broadcast Sports International (BSI) use have some weight to them.  Less than in the early years of high-definition cameras, but still some mass.  In the interest of fairness, NASCAR mandates all teams not running in-car cameras to carry dummy weights in the same area of the car as the cameras that weigh the same.  NASCAR found that the dummy weights on Bowyer’s car weren’t up to spec.

As a result, Bowyer has been docked 10 driver points, while Tony Stewart has lost 10 owner points.  Crew chief Mike Bugarewicz has been fined $25,000 and suspended from this weekend’s AAA Texas 500 at Texas Motor Speedway.  In addition, NASCAR has encumbered Bowyer’s third-place finish.  It cannot be used for tiebreaker purposes.  Bowyer had a 61-point lead over Erik Jones in the point standings leaving Martinsville, so he will remain in 18th despite the penalty.

In addition to the L1 penalty, two teams were busted for loose lugnuts.  After Sunday’s First Data 500, Ty Dillon‘s No. 13 and Daniel Suarez‘s No. 19 were found with one loose or missing lugnut.  As a result, crew chiefs Robert “Bootie” Barker (Dillon) and Scott Graves (Suarez) have been fined $10,000 each.

Somewhere Carl Edwards is laughing his ass off at the absurdities reported here. An encumbered 3rd place finish that really means nothing as far as the standings are concerned, all over the weight of a fake camera. And Nascar pockets twenty grand over two loose lug nuts on the cars of also-rans.

So what did the team change in the inspection before and after the event to get this unfair advantage that Bowyer had? It had to make his car a greater challenge to Kyle and Martin.

NASCAR still miffed at all the cheating under the Gazaway regime. Figure in twenty years they will be even. Absurd.

LOL, sorry I find this whole thing absurd and funny as hell. A Plus for creativity. OMG. Too funny. And NASCAR CUMCUMBERING A THIRD PLACE FINISH. COME ON….SMH.

Well at least it wasn’t as bad as intentionally spinning out to bring cause a caution.

just when you think they can’t get any more ridiculous!

You ain’t seen nothin yet!

So Bowyer’s weight was improper.