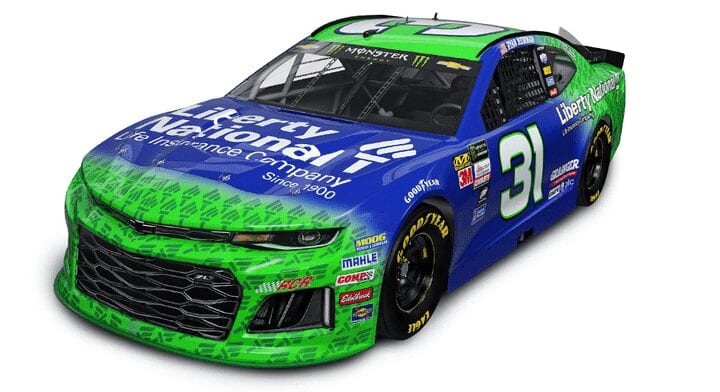 Ryan Newman will have new colors next season to go with his new Chevrolet Camaro ZL1 in 2018. Richard Childress Racing announced Wednesday morning that Liberty National Life Insurance will serve as a sponsor on the No. 31 Camaro in the Monster Energy NASCAR Cup Series in 2018.

The deal will also include at-track activation to engage the company’s independent agents and business-to-business customers, according to the RCR website.

“We feel that this partnership is a terrific opportunity for Liberty National to expose its brand and products to millions of NASCAR fans while expanding its footprint,” said RCR president Torrey Galida. “We look forward to hosting and engaging their agents and customers at the races next season.”

Liberty National is somewhat new to NASCAR, currently in their first year as a primary sponsor. Liberty National Life Insurance Company has served as the primary sponsor of Trevor Bayne‘s No. 6 Ford for Roush Fenway Racing in three races this season. In those races, Bayne finished a season-best third at Talladega last month.  He also finished 12th at Atlanta and 23rd in the Coke Zero 400 at Daytona in July.

Newman, 39, is currently in his 16th full season in the Monster Energy NASCAR Cup Series. He is currently 16th in points with a victory at Phoenix. For his career, Newman has 18 career victories, including the 2008 Daytona 500.