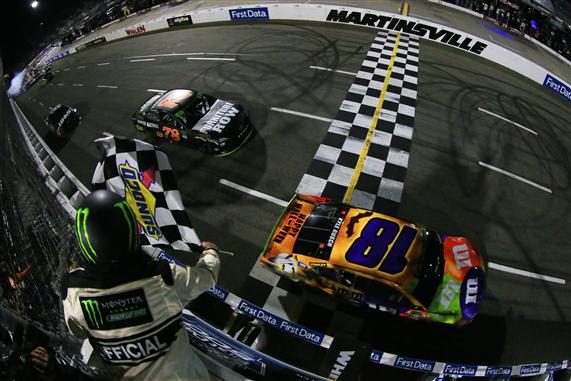 The Monster Energy NASCAR Cup Series made its second visit to Martinsville Speedway this weekend. Technically, Halloween was still two days away but things got plenty spooky on the half-mile ,paperclip-shaped oval in southern Virginia. There’s a good chance one could ring the doorbell at any NASCAR team’s shop this week and walk away with a bag full of sheet metal. They certainly have enough to spare.

It seemed fitting that Kyle Busch, the driver of the M&M’s sponsored Toyota, was the only one who ended up getting a treat. His victory secured his place in the Championship 4 at Homestead for the third straight year. Cruel tricks, on the other hand, were dished out all over the place. Chase Elliott was left with a tall hill to climb to join Busch as a title contender, even though he was only moments away from his first career win.

So where does that leave the Power Rankings? Our contributors weren’t spooked by all of the frightening occurrences. Nothing spooks them all that much, other than maybe an empty snack table in the media center. But did they manage to scare up a solid list? Or are the rankings just as terrifying as the people who compiled them? Take a look and let us know what you think.