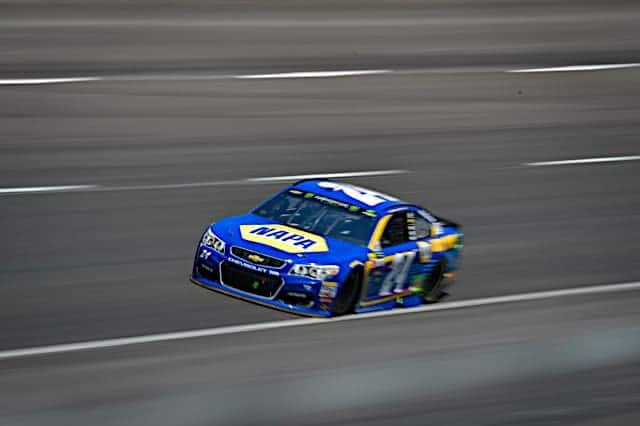 The story of the week — and perhaps the playoffs — reaches its next chapter this weekend at Texas Motor Speedway when Chase Elliott and Denny Hamlin return to competition after their late-race contact Sunday at Martinsville Speedway.

For Elliott, the crash in Turn 4 not only ended his next shot at his first Monster Energy NASCAR Cup Series win, but it also significantly impacted his chance at a championship. At his current deficit and with disappointment fresh in his mind, will Elliott ease his troubles at Texas?

It seems like a reasonable destination for a turnaround, with the 21-year-old finishing fifth, fourth and ninth in his prior three Texas starts. Also, 1.5-milers have been tremendous for Elliott this year, finishing top five in six of the nine.

Then again, you can say the same about most of his playoffs thus far. Entering the postseason with little performance in late summer, he turned things around quick with a runner-up finish at race No. 1 at Chicagoland Speedway, backing it up with another second two weeks later at Dover International Speedway and yet another at Charlotte Motor Speedway.

And just when we thought the toughest loss came at Dover — which arguably could still hold true — Martinsville hit, dragging Elliott 26 points behind the Championship 4 cutoff with two races to go. Despite a strong sophomore effort this season, he definitely has his work cut out for him.

Is a First Texas Win in Order for Kevin Harvick?

He may have been backward across the finish line, but Kevin Harvick found the top five last weekend at Martinsville, and as spectacular as it was, the finish and its fashion could not have better recapped the 2017 playoffs for the 2014 champion: hit and miss.

Since Chicagoland in September, the Stewart-Haas Racing driver has shown an ability to win sprinkled with signs of bad luck on top. Though he’s led 30 percent of his total laps of 2017 in the seven playoff races alone, he has also scored finishes of 36th, 17th and 20th in both the rounds of 16 and 12.

But the highs seem to be more prevalent for Harvick, who has shown his best speed of the season at the 1.5-milers lately. Of his 812 laps led in 2017, 80 percent of them have come on 1.5-mile tracks. Additionally, his two best finishes this postseason came at Chicagoland and Charlotte.

Entering this weekend fourth in the championship and only three points to the good of the Championship 4 in Homestead, Harvick is in prime position thanks to mastering Phoenix Raceway, a track he’s won at eight times.

But surprisingly enough, he’s never won at Texas. In fact, it wasn’t a good place for him until he joined SHR in 2014, as Harvick led only eight laps in his first 24 starts in Fort Worth compared to 185 in his last five. During that time, he scored a third, fourth, a sixth and a pole, all coming after two runner-up finishes in 2014 and ’15.

If recent performance tells any story, Harvick’s final page could end in Homestead racing for the title for the third time in four years.

How Will Erik Jones and Christopher Bell Compete in XFINITY Race?

The latest first-time winner for the XFINITY Series came last time out at Kansas Speedway when Christopher Bell slid his way ahead of Erik Jones to score the victory for Joe Gibbs Racing. And with a confirmed future with the Toyota team full-time in 2018, it made the victory a potential sign of things to come next year.

However, the win sent another sign through the series garage going forward: The kid isn’t afraid to take a chance, even if it’s against a teammate.

Heading into Texas this Saturday, Jones and Bell will race again in the Nos. 18 and 20  as third teammate Matt Tifft bids for a spot in the Championship 4.

How will they race together just two weeks after contact? Well, the one thing expected is seeing both running for the lead in the O’Reilly Auto Parts Challenge. Not only was their race for the win contested at another 1.5-miler at Kansas, but the duo has also swept the ladder series races at Texas this year, with Bell winning in the Camping World Truck Series while Jones is the defending XFINITY winner from the spring.

So speed is more than expected, but circumstances could be different after a run-in. How will each driver handle it? They’re sure to be tested this Saturday.

Chase Briscoe’s championship bid may have ended a few weeks back at Talladega Superspeedway, but he has a few more opportunities to see victory for himself and Brad Keselowski Racing.

And at what better place than Texas? Not only is this another intermediate track, a form of racing in which he’s scored four of his seven career top-five finishes, but it’s also the place at which he came closer than ever to visiting Victory Lane. When Timothy Peters lost a tire and found air in the infield entering the last lap, it was a toss-up between Briscoe and Bell for who was leading at the drop of the caution light.

Unfortunately for the rookie in the No. 29, the win was awarded to Bell, while Briscoe was left with second, his first of three this year.

Can he redeem himself with a win this time around? This track type is his best, with his only top fives coming on 1.5-milers in the last nine races. Additionally, his final two ARCA Racing Series wins last year came on 1.5-milers toward his championship.

Though teammate Austin Cindric is going for a Championship 4 spot for the soon-to-close race team, Briscoe may be their top bet for one last victory in 2017.

Would love to see Little Clyde take the HOMESTEAD CUP! Of course Brian would be thrilled and totally miss the absurdity of it all!

I would also love to see William Clyde take the MENCS Championship at Homestead after qualifying for the Final Four with a win at Texas. Even if Martinsville was a blow to WCE II, it DID remove the potential for him winning the Cup without winning a race, thus ruining kb’s beloved “scenario of doom.”

And yes, Brian would be thrilled to see the Future of NASCAR coming together so perfectly.

(OTOH, reality says Truex and Busch will battle it out for the championship.)

When it comes to finishing races Chase has been the closer without the “C” in that word. He needs to add the ” C” back if he hopes to make it to Homestead as part of the final four

Would love to see all of Hendricks wusses have trouble this weekend.

I’m pulling for Keselowski or Blaney, or Truex,, or Harvick, or Elliott – anyone besides Busch or Johnson. or Hamlin, pretty much in that order. ; )