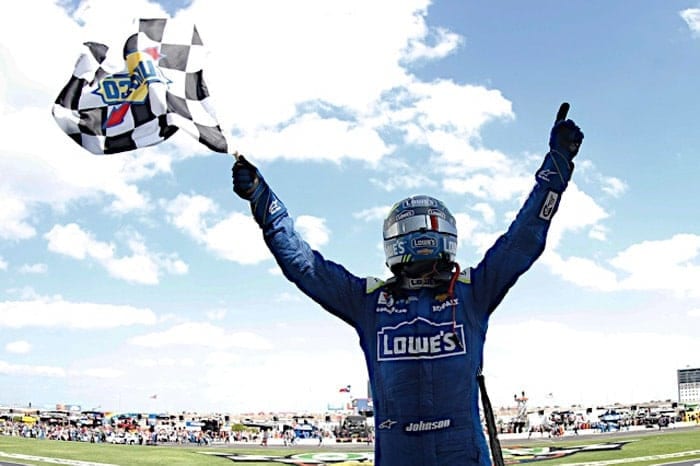 DraftKings’ daily fantasy NASCAR heads to Texas Motor Speedway this weekend for the AAA Texas 500. This race marks the second event of the Round of 8 in the Monster Energy NASCAR Cup Series playoffs. The green flag flies Sunday afternoon at 2 p.m. ET on NBCSN.

This week’s fantasy forecast is brought to you by DraftKings, the No. 1 platform for Daily Fantasy Sports. You can jump in on all of the daily fantasy NASCAR action at Texas this weekend by signing up at this link for a free entry into one of this weekend’s contests. All you have to do is make a $5 deposit to get started!

Truex’s 2017 season has been the most dominant in NASCAR Cup Series history when it comes to intermediate tracks. He has six wins on 1.5-mile ovals this season, posting an average finish of 2.8. Because of that, he has all but locked himself into the Championship 4 race at Homestead-Miami Speedway. Truex enters the weekend with a full race lead over fifth place in the standings and starts Sunday’s race inside the top 10.

Truex has five straight top-10 finishes at Texas and has led laps in three straight races there. It’s easy to assume there is another impressive performance on the horizon.

Harvick has yet to win at Texas but has the fourth-best average finish among all active drivers (11.7). He has six straight top-10 finishes at the track, including four inside the top five. Harvick started on the pole at the speedway back in April and led 77 laps in a fourth-place effort.

Harvick currently has the points to make Miami and will need a good finish to maintain that position. Add in a top-10 start and there’s plenty of proof the No. 4 car should be a Sunday contender.

There are six drivers fighting for the final two final playoff spots at Homestead, and Johnson is one of them. The seven-time Cup champion is currently three points below the cutline and may need a win in order to ensure a spot in the Championship 4. Misfortune from the other drivers could be helpful as well if Johnson plans to capture his eighth championship in a mediocre year for the No. 48.

Luckily, Texas is a great track for Johnson to do just that. He won at Texas earlier in the season, his fourth victory in the last six races at the track. In that event, he started 24th and led 18 laps.

Johnson is the all-time wins leader at Texas with seven wins in 28 starts. He also holds the record for the most top-five finishes (15), top-10 results (21) and laps led (1,041). It’s hard to bet against a man as accomplished as this one inside the Round of 8.

Logano was in position for a solid finish last weekend at Martinsville before a tire rub sent him spinning in the final moments. He led 59 laps from the pole and had a fast racecar all weekend before fading to 24th.

Logano has three straight podium finishes at Texas and has earned five top-five finishes in the last seven races at the track. He also led 178 laps in this race in 2016, finishing in the runner-up position en route to the Championship 4.

Another bid for the title has already fallen far short this year. But Logano has bounced back as of late  and will look to play spoiler this weekend.

Elliott was fighting for the victory at Martinsville last weekend until his run-in with Denny Hamlin. He has yet to win this season or in his young Cup career. That said, he is still holding out hope for the 2017 series championship. The sophomore driver is in a win-only mindset heading into Texas, 26 points below the final transfer spot.

Elliott has finished inside the top five at all three 1.5-mile tracks since the playoffs began, two of which were second-place results. At Texas, he has top-10 finishes in all three of his starts at the track. He finished ninth in April after starting way back in 33rd; that means you should shrug off Friday’s 34th-place starting spot after failing pre-qualifying inspection.

Elliott showed a new, aggressive side to his driving style last weekend. Expect that to continue and only grow this Sunday if he’s chasing a win during the final stage.

Kahne has been electric over the past two seasons at Texas. He finished eighth in the spring of 2015 and was eighth again in both starts last season. It’s a guy whose bread-and-butter over the years has always been intermediate ovals the size of this track.

It’s been a difficult NASCAR playoff for Kahne, who is leaving Hendrick Motorsports after the season. But even as a lame duck, he has top-10 potential this weekend no matter the starting spot.

Texas Motor Speedway was the destination for Earnhardt’s first Cup win back in 2000, and it very well could be the same for his last. NASCAR’s Most Popular Driver has been great there ever since he first rolled out onto the track. While Junior hasn’t had the most storybook ending to a storied career, his only 2017 top-five finish came at TMS back in April (fifth).

Earnhardt has finished five out of the last six Texas races inside the top six, although he’s done so without leading a single lap. In the last five, he started each race from 10th or worse only to race up towards the front.

Earnhardt could be a great sleeper pick this weekend. Position differential potential is also in play after a 17th-place qualifying effort.

Stenhouse has been inconsistent at intermediate tracks this season and over his career. However, Texas has told another story for the No. 17 team.

Stenhouse, coming off a NASCAR playoff appearance has finishes of 16th or better in three straight races at the track. That should be more than enough from a back-end-of-the-lineup driver, even though he starts 12th. 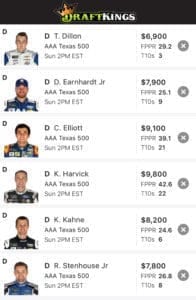