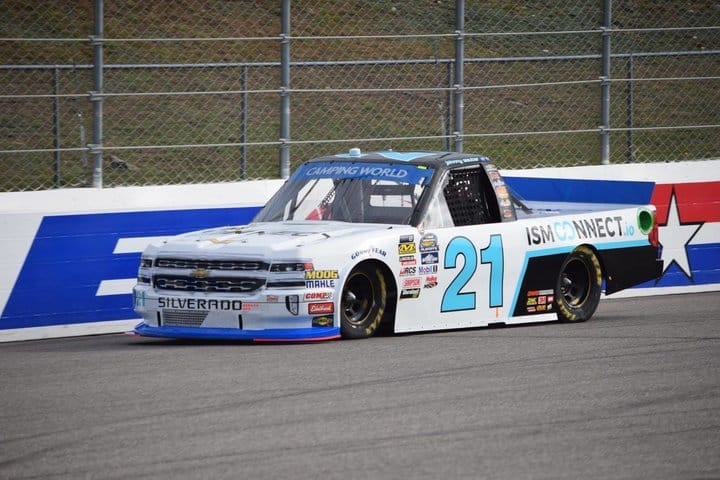 On Thursday afternoon, Camping World Truck Series teams took to Texas Motor Speedway’s 1.5-mile quad-oval for 55 minutes of practice.  In a session where the top of the chart was ultimately dominated by GMS Racing, Johnny Sauter ended up fastest overall with a lap of 29.529 seconds (182.871 mph).

Despite the GMS dominance at the top of the charts, it was actually quite close between Sauter and everyone else.  Sauter’s lap ended up a mere two-thousandths of a second faster than Noah Gragson, last weekend’s winner at Martinsville.  Third was Ryan Truex in the Hattori Racing Enterprises Toyota, just seven-thousandths of a second off of Sauter while Myatt Snider was fourth.  Justin Haley, who spent a significant amount of time at the top of the chart,  rounded out the top five.

Only two of the six playoff contenders (Sauter and Bell) managed to post a time in the top 10.  The remaining contenders were clustered together.  Austin Cindric, John Hunter Nemechek, Matt Crafton and Ben Rhodes finished the session in positions 13-16.  They were separated by just over four-hundredths of a second.

23 of the 32 teams entered turned in laps during the session.  Of those who practiced, Briscoe turned the most laps with 34.  Only two of the 23 trucks that set times completed a 10-lap run.  Gragson’s average lap time of 29.929 seconds (180.424) was faster than Briscoe’s by over three-tenths of a second.

Camping World Truck Series teams have one more practice session on Thursday.  It will start at 5 p.m. EDT and last for 55 minutes.