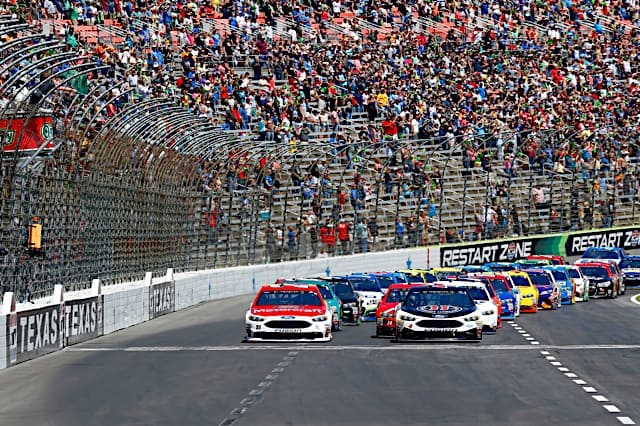 Talk is often made in NASCAR — or any form of auto racing, really — about winning a race from the pole position. After all, it’s part of running what could be considered a perfect race: qualifying faster than anyone else and then holding that lead to the checkered flag. Generally a driver loses the lead at some point along the way (though there are exceptions), but the statistic in the record books remains the same: No. 1 in qualifying, No. 1 in the race.

Conversely, it’s often seen as some sort of herculean feat when a driver wins a race coming from the other side of the starting grid. With Daytona International Speedway and Talladega Superspeedway — two tracks at which a car can go from first to last and back again in a matter of laps — excepted, the story is told in these cases of a driver who couldn’t quite get the qualifying setup right, necessitating a start from, let’s say, 37th place, but by day’s end, they were the one standing in Victory Lane, not the pole-sitter.

More often than not, however, the race winner comes from somewhere in between there, generally within the top 10 or 15. A fast car on Friday (or Saturday, or Sunday, or whenever qualifying’s contested that weekend) generally means speed by the time the green flag flies, and vice versa. Still, there are anomalies, like those sub-30th-place starting spots that become wins or front row starts that end in a last-place finish because of some crash or part failure.

But good news for Monster Energy NASCAR Cup Series drivers who have strong qualifying runs: in 2017, eventual race winners are on pace to be higher up the speed charts than they have in nearly two decades.

Entering Texas Motor Speedway this weekend, Cup winners are averaging a 7.9 starting position. Six of those wins have come from the pole: twice for Kyle Larson (Auto Club Speedway and Michigan International Speedway), twice for Kyle Busch (Pocono Raceway and New Hampshire Motor Speedway) and once each for Martin Truex Jr. (Kansas Speedway) and Ricky Stenhouse Jr. (Talladega). Three more have been the outside pole. And just three have come from outside the top 20, with the lowest starting spot belonging to Jimmie Johnson, who began the April race at Texas from 24th.

That 7.9 average currently bests every season in the 2010s, the previous best belonging to 2014’s 8.8 average (including six wins from the pole that season, too). Conversely, the lowest this decade, 2011, averaged a 12th-place starting position.

Meanwhile, the 2000s’ best before 2017 was just a tick lower: eighth place on average, achieved in 2008, a year with nine winners from the pole.

Should 2017’s 7.9 average hold or even improve with three races to go, the previous best in the Cup Series came nearly two decades before in 1998. That year, the average was an astounding 4.8 in 33 races. How’d that happen? Simple: 30 of those 33 races were won by drivers who started inside the top 10, and only one was won by a driver outside the top 20. That was the season finale, which Jeff Gordon won after starting 21st. That’s it; pure consistency, with seven joint pole/race winners helping matters.

Bear in mind, of course, that this 2017 stat could very, very easily change. With a sample size as small as 36 races, one outlier can screw up the whole average; even if two of the final three races were won from the pole, the other could drive the average above eight if the driver started 25th or worse. Heck, three drivers winning from ninth starting spot would even drive the average to 8.03, which is still a strong effort but would be bested by 2008.

Basically, here’s the deal, if you think this stat is in any way interesting: keep an eye on the starting positions of the drivers who win these final three races in the Cup Series. Yes, there’s plenty else to focus on with the looming end of the playoffs and the season as a whole. Sure, it’s doubtful anyone will even talk about qualifying positions unless the driver in question starts on the front or back row.

But as long as the correlation between starting position and finishing spot remains strong at races Nos. 34, 35 and 36, it’s certainly a water-cooler type of discussion to pull out of your back pocket. Go on, be mildly interesting at your holiday parties. Thank me later.