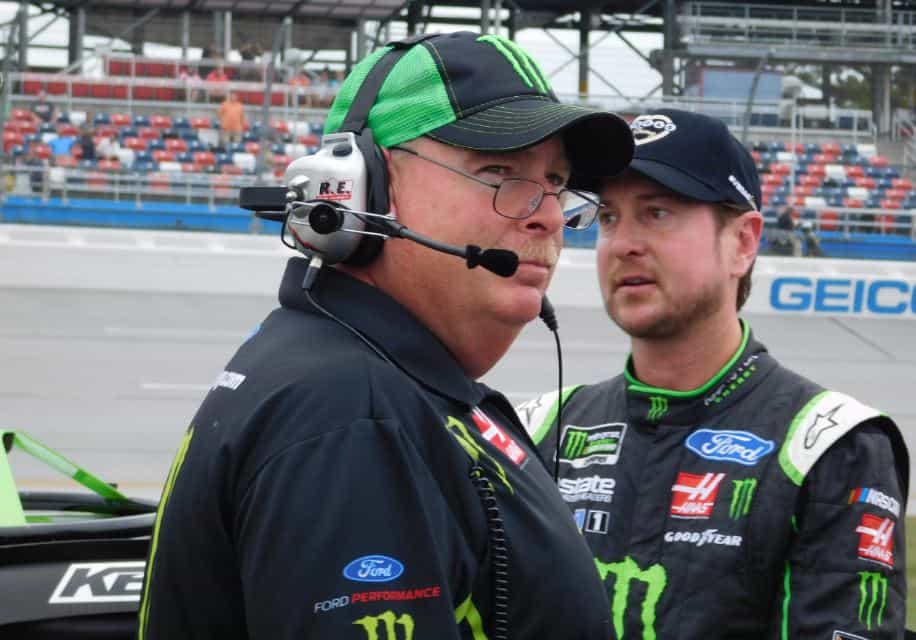 Last weekend at Martinsville Speedway, the No. 41 team more than 90 percent of the race in the top 15. Unfortunately for them, the race went 505 laps and they were turned into the wall coming to the checkered flag. The end result was a 22nd-place finish, coming after another long line of poor breaks that have befallen this team since the playoffs started.

This weekend, they are headed to Texas Motor Speedway for the last D-shaped mile-and-a-half race of the season.

And looking at the freshly paved oval, crew chief Tony Gibson knows that the lack of character in the track is going to allow him to set up the car extremely rigid. The 3,400-pound stock car will be treated almost like a go-kart thanks to the nearly non-existent chassis travel. Tire camber and toe will be set from the beginning with the ride height rule allowing the cars to be down on the ground. Aerodynamics will be key and the cooling of the engine, driver and rear end of the car will all come into play throughout the event. Unlike Martinsville, the brakes will be all but ignored this weekend thanks to their use only to set the nose of the car in the corners and to stop it for pit stops. All of these topics will be covered in this week’s edition of Tech Talk with Gibson.

Mike Neff: We come out of Martinsville and that was about as close to old school Martinsville as we’ve seen in a while. Up until 20 laps to go, how did your day go?

Tony Gibson: It was actually going really good. We ran from sixth to tenth all day. All of our cars ran right around there all day. That’s where we were running coming to get the checkered flag and that’s when all hell broke loose. We were hit from behind and went head on into the wall. We ended up 22nd. Harvick went across the line backwards in fifth I think. We were about 150 yards from, hell not even that far, 100 yards from getting a solid finish out of it but, as everyone saw, it turned quickly at the end.

Gibson: Yeah, it started freeing up for us and most of our guys, as it started getting cooler. It started drawing the dampness out of the track and it started getting slicker. There was a huge transition in the race track, just after the second break. It started getting free and then it was just like a light switch. We did ok, we only spent a small stint of the run too loose. We held on pretty good and made an adjustment there at the end. We were going to be in pretty good shape and then, like I said, everything broke loose and we got tagged from the back. It was catastrophic from there on. It was a huge change in the track for sure.

Neff: We are headed down to the Lone Star State. The track is still pretty smooth after the most recent repave. Has any of the character come back yet?

Gibson: No, it will be a long time before that happens. It is really, really smooth. The first race out here there was no outer groove at all. You had to be pinned on the white line and it stayed that way for most of the race last time. Finally, at the very end, there was maybe another groove that opened up, but you had to be really careful with it. In turns three and four you could run that groove a little bit higher, maybe one groove up from the bottom Turns 1 and 2 you still had to be pinned right to the bottom. It will be interesting to see how much this track changed from the first race. I look for it to be really close to what we had when we ended in the spring. The trucks will have a race on it and there will be a lot of rubber laid down before our race on Sunday. I feel like it is going to be about the same. I feel like it will be a one groove race track for a long time. Towards the end it will open up a little bit but track position will still be huge just like it was in the spring here.

Neff: We’ve been talking a lot about tires in these Tech Talk interviews, at least during the second half of the year. Is it the same tire we’re running this time that we ran in the first race of the year?

Gibson: Yes, same tire, as far as I know, at least that is what they told us. It will be interesting to see how it responds. Even though it is the same tire, the surface changes, which changes everything about the tire. Obviously it will be a different batch of tires from the first run. I think scuffed tires were really good here the last time but I feel like stickers will be a little bit better in the race this time than they were in the spring. I think guys will still probably quality on scuffs but I feel like stickers will be better in the race.

Neff: You said it is still a really smooth race track. How much chassis travel do you anticipate on your car from the straightaways to the corners?

Gibson: It won’t be a lot. Maybe 200 thousandths. Maybe 250 thousandths. It isn’t going to be a lot. It is so smooth and everyone runs these cars really, really stiff. It is all about the platform and the aero versus the mechanical. It will be a lot like when Charlotte was first repaved, or Michigan. Everyone will be pinned right down and the travel won’t vary a whole lot.

Neff: Earlier this year we talked about bump stops and how they’ve changed the way they are manufactured. Sometimes you use some that are almost like small springs and other times you use something that is a more malleable substance that kind of gives a little bit. With the track being that smooth are you able to go with a pretty rigid bump stop that doesn’t really give at all?

Neff: When you think about the fact that you aren’t getting much travel at all, do you really put much camber into the tire at all since it is going to be at the maximum tire patch angle for most of the run with the minimal chassis movement? Is it basically straight up and down since it isn’t hardly traveling at all?

Gibson: No, the tire still wants a specific camber. The slip angle of the tire, which is the toe, the tire still wants that for grip. The tire data will let you know where you want your dynamic camber and your slip to be to achieve maximum grip. On a place where we really don’t travel a whole lot, we’ll hover right there at peak grip camber and slip angle with our toes and everything. The camber will be dictated purely by what the tire data shows us. This particular tire likes some camber in it. We’ll definitely have camber in it. It won’t be straight up and down here, it will definitely have some camber to it.

Neff: From a cooling perspective, not sure what the ambient temperature is supposed to be, but it is Texas so it is usually relatively warm. With the lack of tire give up, the drivers are going to be in the gas for the vast majority of the lap. Do you or Doug Yates and the engine guys do anything with the EFI mapping to try and assist with the engine cooling through the fuel or is it all going to happen through the grill opening and the radiator?

Gibson: No, obviously they do most of the tuning based off of altitude and things like that. The ECU is pretty good at compensating for that kind of stuff. Most of the cooling will be strictly on the teams with the radiator/oil cooler combination that we run. The duct work inside and how much grill tape we actually run.

Neff: Speaking of duct work, are you required to have duct work come through the passenger side window for driver comfort? At one point NASCAR mandated that the NACA ducts in the right window had to be open and pointed to the driver.

Gibson: Yes, on the right side, where the passenger side window is, we have to have a dual duct over there and it has to have hoses on it that go to the driver, and it has to be functional all of the time. On the left-hand side, they allow us a pretty good sized duct at the B-post. That is where the driver gets the air for his AC unit and those types of things. They don’t require that on the left side, where the driver is, but they give us a pretty good amount of ducting there. On the right side, we do have to leave that double NACA open with two hoses, one doing to the driver and one going to the foot box unrestricted. You can’t have any kinds of fans or anything in it at any time, it must be unrestricted at all times.

Neff: Do you have any kind of duct work going to cool the rear end of the car?

Gibson: We do, we have a box fan. The coolers are in a box and it has fans that draw air through the cooler from underneath. That way we don’t have to give up any aero side of things like taking it through a quarter window or anything like that. We strictly use a box with the coolers and we just pump air through it from the bottom of the car.

Neff: Brakes were a huge deal at Martinsville where you used the biggest package you can get your hands on. At this race you may not even use the brakes during half of the time you’re turning laps. Do you have to worry at all about brake cooling for this event?

Gibson: No, they’ll use the brakes but not with a lot of pressure. They’ll probably use a couple hundred pounds of brake pressure at the most. Most of that is a trail braking thing. They will still be in the throttle and trail braking, enough to keep the front of the car down and on the stops. It won’t require any kind of cooling at all.