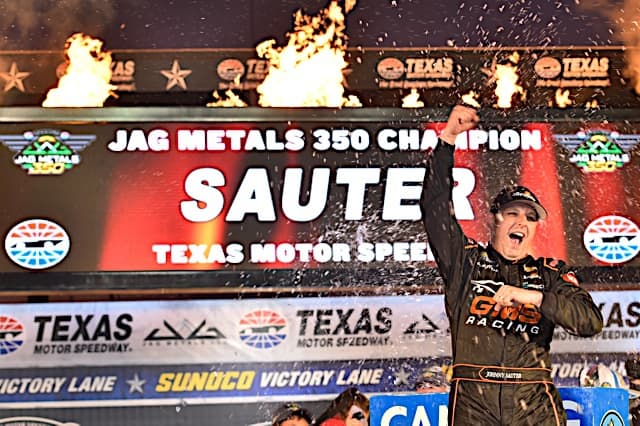 On Friday night, Johnny Sauter became the first driver to secure his spot in the Camping World Truck Series Championship 4 while earning his second straight victory in the JAG Metals 350 at Texas Motor Speedway.

The last time Sauter visited Texas Victory Lane in the series, he would go on to secure his first championship, which came last year.

“I haven’t been pumped up this much in a long, long time,” Sauter said. “Yes, this is looking a lot like it did last year, shaping up like it is. Honestly, this is our third win this year. I think we should have six or seven right now. We’ve got to be humble and stay nose to the grindstone, so to speak. You can’t let your guard down.”

But the night wasn’t easy as Sauter had to battle fellow playoff competitor Austin Cindric to earn his 16th victory of his career and fourth at Texas.

“I think it was youth versus experience tonight, and experience won, in more ways than one,” said Cindric, who came up short of his second career victory. “Johnny taught me a few things, but he basically taught me while he passed me for the race win.”

Three of the top five were playoff drivers, two of which enter Phoenix with a little cushion over the cut-line. Christopher Bell finished third followed by non-playoff drivers Chase Briscoe and pole-sitter Justin Haley.

Two playoff drivers made dangerous mistakes during the race that ultimately put both below the cut-line as the series heads to the final race before the championship race at Homestead. The absolute worse time to make a mistake happened for Ben Rhodes and John Hunter Nemechek.

Nemechek entered the race in a hole after a crash at Martinsville. And the hole got deeper in Texas after a gamble with fuel back-fired, with the two-time race winner in 2017 finding himself in a must-win situation next weekend in the Lucas Oil 150.

Rhodes had a strong night, however, had one bad stop with 17 laps to go cost the No. 27 team a strong finish. Though not as disastrous as Nemecheks’, his day was salvageable and he’ll need a little help next weekend if he wants to battle for a championship at Homestead.

The race was only slowed by caution five times. Only three cautions were caused by incidents while the remaining were stage conclusions. With the victory, Sauter ties Kyle Busch with three victories in the fall race at Texas.