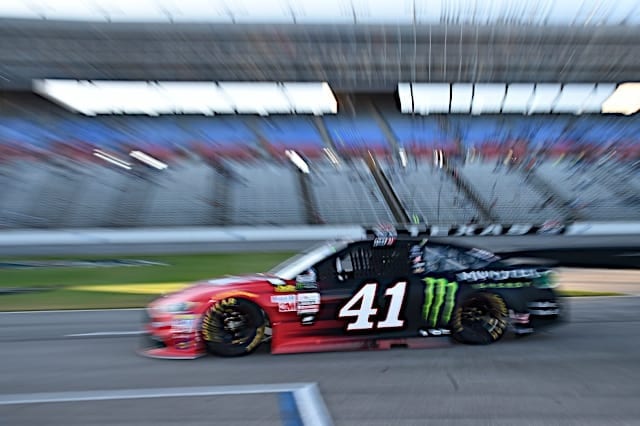 On Friday, Kurt Busch was able to secure his first pole of 2017 and 22nd of his Monster Energy NASCAR Cup Series career.

Busch, who was eliminated from the championship playoffs in the Round of 16, was able to spoil the playoff party by knocking Denny Hamlin off top with a blistering fast lap of 26.877 seconds (200.915 mph.). In fact the top five set blistering paces turning speeds just at 200 mph.

“[Turn] 3 and 4 is an incredible sensation,” said Busch. “Once the car goes into the banking, it travels. The suspension collapses in the car and the car gets lower to the ground and picks up speed. It is a sensation that is hard to describe. When you have that grip level in the car it gives you the feeling that you can just put it down to the floor and there won’t be any consequences. Turns one and two are where I think the lap times come from.”

Of all eight playoff drivers, only one didn’t qualify inside the top 12. In fact, he didn’t even qualify and will start the race on Sunday from 34th. Chase Elliott’s car failed pre-qualifying tech and the team were not able to get out and complete a lap. Seven drivers including Elliott were unable to complete a lap after inspection issues. Expect drivers to be sitting in the penalty box on Saturday during one of the practice sessions.

Playoff driver Kevin Harvick will start Sunday’s race from the third position, his best start since Kansas less than two weeks ago. Erik Jones seemed to have the speed during the first two sessions but only had the fourth fastest time of the final session. Kyle Busch rounded out the top five.

"Jimmie started in the back here in the spring and it worked out for him." – @chaseelliott. #2the4ront pic.twitter.com/E3We7v8ddo

I’m pretty sure there will an excuse when Elliott doesn’t sit on pit road during practice like the Ford driver did.