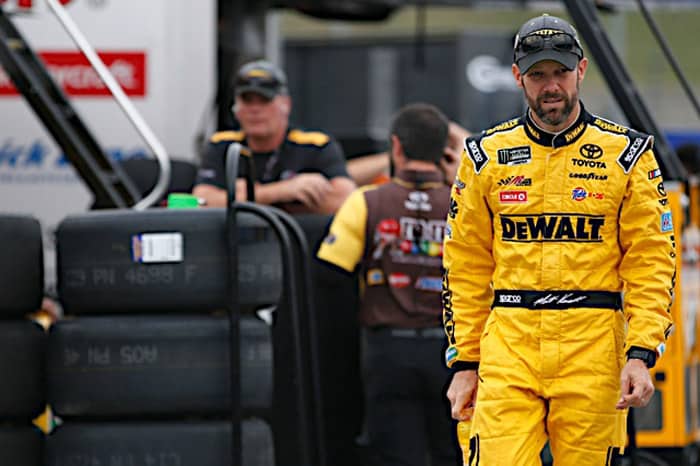 After much speculation, Matt Kenseth announced he is not actively searching for a NASCAR ride for 2018. And following the announcement that Erik Jones would be replacing Kenseth in the No. 20 for Joe Gibbs Racing next season, the future of the 2003 Monster Energy NASCAR Cup Series champion within the sport became foggy.

Rumor after rumor would be thrown around and one by one they would be erased, and in the end, the seats were full when the music stopped. That led to Kenseth decision to “step away” from the sport after 2017.

“I’ll just take some time off, whatever that means,” Kenseth said. “I don’t know if that’s a year, two years, three months, four months, I mean you never know what happens.

“I’m not committing to anything for 2018. I’m just going to – I don’t know, I mean the retirement word doesn’t really make a lot of sense in this sport really because there’s… it’s not like the NFL where you get a pension if you officially retire or you do any of that stuff. Mostly it’s for people like Dale Earnhardt Jr. who got to fill the seat and have a sponsor and all that stuff.

“For me it’s just different because I didn’t really have that option, my seat got filled before any of that so there’s really no reason to talk about it.”

A veteran in the sport, Kenseth has seen his ups and downs in his career. Sine his rookie year in 2000, Kenseth has secured two Daytona 500s, a championship in 2003 and more than 600 starts in the Cup Series. Overall, Kenseth has showcased 67 victories, 318 top fives, 526 top 10s and 37 pole positions among NASCAR’s top three series.

Despite the decision, the 45-year-old still leaves the door open of racing again if something comes up.

“Maybe something comes along that really makes you excited and it feels like it’s going to be a fit, you might go do,” he said. “Certainly not going to rule that out. But for now, I’m not making any plans for 2018. I just plan on having some time off.”

Kenseth joins Earnhardt Jr. as drivers who will be riding away into “retirement” when the checkered flag is shown at seasons end in Homestead-Miami Speedway. Both drivers battled for Rookie of the Year award in 2000, with Kenseth claiming the honors.

You’d think Gibbs could have at least had the courtesy to give Kenseth a heads up on this before the season started. Kenseth at least deserved the chance to formally announce his retirement and do a final lap like Earnhardt is doing and like most drivers get the opportunity to do. Total cheeseball move by Gibbs, especially on top of gutting Kenseth’s team to keep the mexican money boys happy. Clearly, Ratcliffe and his crew haven’t been much on the ball this year and it showed with the dismal results, especially that clown show with 7 men over the wall. Just ridiculous. Total junk move by Gibbs and I’ve lost respect completely for him after this.