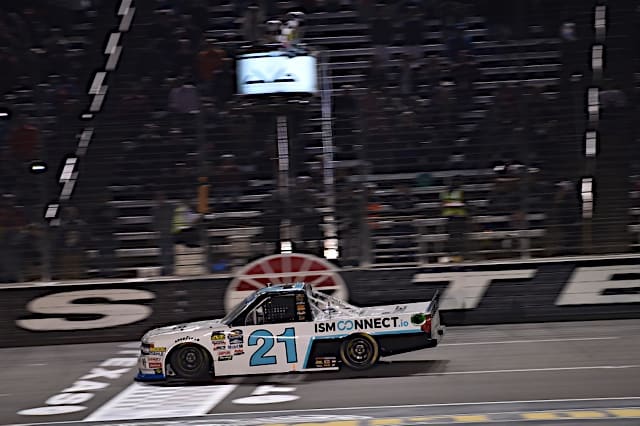 In A Nutshell: Johnny Sauter took the lead with 13 laps to go when John Hunter Nemechek ran out of fuel.  From there, the defending Camping World Truck Series champion held off Austin Cindric to take his third win of the season.  The victory locks him into the Championship 4 at Homestead-Miami Speedway in two weeks.

In Victory Lane, Sauter gave props to his team.

“[Tonight] was a total team effort,” Sauter said.  “Can’t thank everyone at GMS [Racing] and ISM Connect enough.  We got Hendrick horsepower their 400th win tonight.

“I was actually pretty worried about our truck after qualifying. It was pretty loose, and all we did all night was lower the track bar half a round.”

Behind Sauter and Cindric was Christopher Bell in third, four seconds back.  Chase Briscoe was fourth, while Justin Haley rounded out the top five.  Kaz Grala was sixth, followed by Grant Enfinger and Ryan Truex. Matt Crafton recovered from a pit stop penalty to finish ninth, while Noah Gragson was 10th.

Who Should Have Won: In all honesty, it could have been any number of drivers.  Sauter was tied for third-most laps led on the night with Myatt Snider.  Cindric led the most laps on the evening.  However, the driver that probably should have won was Christopher Bell.  Bell had a very fast JBL Toyota Friday night, leading 20 laps.  However, he chose to wait an extra nine laps to make his final pit stop after Sauter did.   Most of those nine laps were spent running by himself on track.

The draft played a sizable role during the race Friday night.  As a result, Bell was ever so slightly losing time to Sauter and Cindric as he continued to stay out, hoping to catch a caution.  Prior to the stops, Bell was right with the leaders.  When he came out of the pits, he was two seconds behind Sauter and Cindric, still running alone.  As a result, he could not keep up with the two leaders and finished a lonely third.

After his big wreck in Martinsville, John Hunter Nemechek knew that he had to take chances in order to have a chance at the title in Homestead.  That resulted in NEMCO Motorsports devising a plan to try to get a caution during the long run that ended the Jag Metals 350.  However, he came up short when the fuel ran out with 13 laps to go.  Having to stop wouldn’t have been all that bad under the circumstances.  Nemechek had a 17-second lead over Sauter when the fuel ran dry.  Had he pitted before running out, he still could have finished somewhere near the top 10.  However, Nemechek had serious problems getting the Romco Chevrolet to restart.  Once he finally get the engine cranked, he immediately got busted for speeding. The pass-through penalty dropped him to a 19th-place finish, two laps down.

Nemechek is now 89 points behind Bell and 39 behind Cindric in fourth.  He’ll have to win Friday night in Phoenix in order to qualify for the Championship 4.

Back in the 1990s, Goody’s Headache Powders had a special contingency award that they would bestow upon the driver who had the worst luck in the race.  Looking back at the weekend in general, no one had worst luck at Texas Motor Speedway than Tommy Joe Martins.

As was noted in our practice recaps on Thursday, Martins failed to record a time in either of the two practice sessions.  The reason? Martins crashed his Diamond Gusset Jeans Chevrolet in Turn 1 on his first timed practice lap.

Made it down the frontstretch once today. Something broke/bound up-wrecked in turn 1. Furious. @hrmn8ter will run as our backup tomorrow. pic.twitter.com/K0ivaiNJUo

According to Martins, the truck is a write-off.  For the race, Martins borrowed a truck from Mike Harmon and started shotgun on the field.  Martins quickly made it up to 24th before disaster struck on lap 4.

Martins stated on Twitter afterwards that it was a failure that put the No. 42 Chevrolet into the wall.  He also apologized to Harmon for wrecking his truck.

Feel awful for @hrmn8ter. He let us use his truck to run this race it’s completely destroyed. Either tire or RF suspension. Total mess.

Martins continued on to state that the crashes cost his team $50,000.  They’ll likely have to buy at least one new truck to replace the one thrashed on Thursday.  Regardless, the Mississippi native came out of Texas crestfallen.

On Friday night, Ben Rhodes had a pretty strong evening.  He scored 12 points during the first two stages and was in position for a decent finish.  Then came the final pit stops.  Rhodes pitted on the same strategy as Bell, but didn’t get all the lug nuts tight on the right front wheel.

That was just the beginning of Rhodes’ problems.  In order to avoid a lug nut fine, Rhodes stopped to get the lug nut back on the wheel.  What is normally a stop of two seconds or less turned into nearly 19 seconds.  A nightmare scenario by all accounts.  As a result, Rhodes finished two laps down in 18th and fell to fifth in points, five behind Cindric.  He’ll be able to point his way into the Championship 4 with a good run in Phoenix, but he shouldn’t have been in that position to begin with.

ThorSport Racing’s Matt Crafton had an up-and-down evening at Texas.  Early on, Crafton was extremely loose and nearly spun out on lap 4 just before Tommy Joe Martins’ crash.  Later on, the truck came back to him, allowing Crafton to score points in both stages.

However, Crafton was sent to the rear of the field for what turned out to be the final restart due to a pit violation.  A member of Crafton’s pit crew went over the wall too soon, which is a violation.  However, the way the infraction was explained to the team resulted in significant anger.  Regardless, Crafton dropped to the rear for the final restart.  From there, Crafton climbed from 20th up to ninth at the finish.

No. of rookies in the race: 11 (add Patrick Emerling and Myatt Snider to the mix)

Rookie of the Race: Austin Cindric

Playoff Points Update: With Johnny Sauter’s victory, he is now locked into the Championship 4 at Homestead-Miami Speedway.  Points-wise, Christopher Bell’s third-place finish gives him a four-point lead over Sauter.  Matt Crafton is third, 31 points back, followed by Austin Cindric.  By virtue of his lug nut issue, Ben Rhodes is fifth in points, 55 out of the lead and five behind Cindric.  John Hunter Nemechek is 39 behind Cindric and all but has to win in Phoenix to advance.

Up Next: The Camping World Truck Series returns to the site of the series’ very first points race, Phoenix International Raceway for 150 miles of action. The Lucas Oil 150 is scheduled to start at 8:30 p.m. EST.  Coverage begins with NCWTS Setup at 8 p.m. on FOX Sports 1. The race can also be heard on selected MRN Radio affiliates, or on SiriusXM NASCAR Radio.