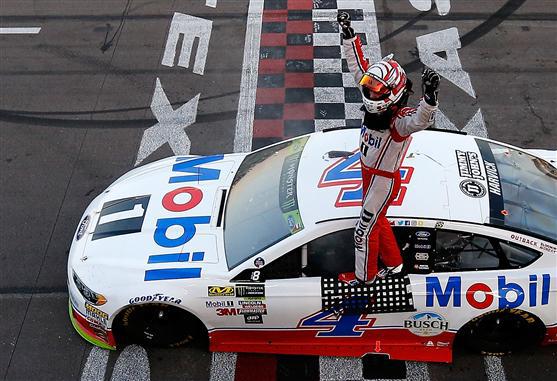 It looked as if Martin Truex Jr. was going to sail off to another victory on a mile-and-a-half track. But Kevin Harvick had something else to say about that, passing the No. 78 car with 10 laps to go.

As the laps clicked off, Harvick inched further and further away from Truex and with no late-race caution, he would earn his first Cup victory at Texas Motor Speedway.

Kyle Larson had one of the best cars of the afternoon, running in the top 10 for the majority of the day. But with less than 50 laps to go, Larson’s hopes of winning at Texas went up in flames, literally. He hit the outside wall and fire emitted from the rear of the No. 42 Chevrolet. The 37th-place finish would be Larsons’ third straight DNF and sixth of the season.

Kyle Busch is thankful for his victory last weekend at Martinsville Speedway after he cut a tire on the first lap at Texas. Brad Keselowski was also involved in the incident, but bounced back. Keselowski earned his 15th top-five finish of the season and made the incident at the beginning sting a little less.

Truex did everything he needed to do on Sunday, leaving the 1.5-mile speedway with a 57-point advantage over the cut-line. With that advantage, Truex mathematically punched his ticket to Homestead-Miami Speedway for the Championship 4.

Only one spot remains, which means Chase Elliott, Denny Hamlin, Brad Keselowski, Ryan Blaney and Jimmie Johnson are for the most part all in must-win situations. Should a non-playoff driver win next weekend, stage points will be extra crucial.

After seeing the rear tire on Harvick’s FORD car after the burnout, it wouldn’t surprise me if there was a new penalty announced by Brian.

Can they please stop with the “PUNCH HIS TICKET” BS? Please! Pretty Please!