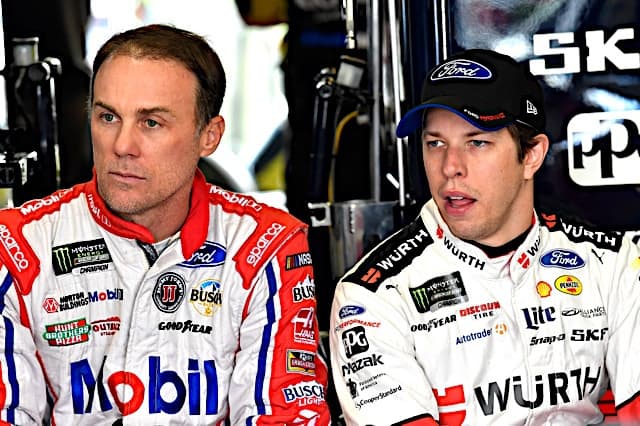 In the fourth season of the elimination-style playoffs, NASCAR may have finally gotten its wish.

Heading to the final race in the Round of 8, three spots in the championship battle at Homestead-Miami Speedway have already been filled.  With just one more spot open, advancing might depend on a championship hopeful winning next week at Phoenix International Raceway.  Points will not matter nearly as much as they have in the last few years.

By virtue of their victories, Kyle Busch and Kevin Harvick will compete for the championship in two weeks.  Martin Truex Jr. also ensured that he would advance to Homestead on points.  That leaves Brad Keselowski, Denny Hamlin, Ryan Blaney, Chase Elliott and Jimmie Johnson to fight for the last ticket to the title fight.

Leaving Texas Motor Speedway, Keselowski holds a 19-point advantage over Hamlin, who is the first driver out.  Blaney trails Keselowski by 22 points, Elliott trails by 49 and Johnson is behind by 51.

Unless Keselowski runs into trouble at Phoenix, those deficits will be really hard to make up.  Elliott and Johnson are so far behind that they do not have to worry about points at Phoenix.  Even Hamlin and Blaney will have a hard time advancing without taking the checkered flag.  As long as Keselowski has a decent race, Hamlin and Blaney will not have many options to make up about 20 points on the No. 2 team.

Winning is the only clear way to advance for everyone below the cut line.  Throw in the fact that Busch, Harvick and Truex have nothing to lose by swinging for the fences either, and seven of the eight playoff drivers will head into Phoenix with the mindset that only a win will do.

Having drivers focused solely on winning is a bit of an unusual situation for this point in the season.  NASCAR has often billed the elimination-style playoffs as the ultimate quest for victories, a system which demands a win-or-nothing mentality from the competitors.

However, the circumstances in the Round of 8 usually work against NASCAR’s desire to see teams throw caution to the wind.  Earlier in the playoffs, drivers get eliminated through bad finishes and generally poor performance.  Most teams in the postseason are able to advance as long as they have at least a little speed and avoid major mistakes.

By the Round of 8, the remaining playoffs teams are a combination of the year’s strongest organizations and those who have been able to elevate their performance at the right time.  These are the drivers who run well week in and week out, and are unlikely to have catastrophically bad days.

As a result, the Round of 8 often comes down to drivers taking conservative approaches to the races, scrapping for the few points that might make a difference between advancing and getting knocked out.

For instance, the Round of 8 in 2014 turned out to be the ultimate points race.  Dale Earnhardt Jr. and Johnson won the first two races, but both of them had already been eliminated.  Going into Phoenix, Hamlin and Joey Logano were tied atop the points standings, but only 13 points above the cutoff.

At the other end of the spectrum, Harvick was eighth in the standings, just six points from advancing.  While Harvick came back to win, most of the title contenders were focused on avoiding disaster and preserving the points that they had. Ryan Newman wound up earning the final transfer spot over Jeff Gordon by a single point.

In 2015, Gordon was the only driver locked into the final round before Phoenix.  While Logano and Kurt Busch found themselves in must-win situations, all of the drivers above the cut line besides Gordon were within four points of each other.  While Earnhardt won a rain-shortened race, Harvick, Kyle Busch and Truex turned in respectable finishes that were just good enough to get them to Homestead.

Round of 8 wins played a bigger role in 2016.  Johnson won at Martinsville Speedway and Carl Edwards won at Texas, locking up two spots for the championship round.

However, the fight for the other two spots was incredibly tight.  Kyle Busch and Logano held those spots by a single point over Matt Kenseth, who was only one point ahead of Hamlin.  In the midst of such a tight points race, those drivers had to be conservative going into Phoenix.  Logano did advance by winning, while Busch snuck through on points.

For 2017, there is no tight points battle.  Just like last year, two different playoff drivers won the first two Round of 8 races.  Yet unlike last year, Truex’s playoff points have taken an additional transfer spot out of the picture.  Only one spot remains, and anyone who hopes to earn it without a victory will have to beat Keselowski, who holds a bigger points cushion that what we normally see this time of year.

The Monster Energy NASCAR Cup Series season will conclude 2017 with not one, but two winner-take-all races.  There will be no conservative approaches to Phoenix this year.  Get ready for a much different final race to the Round of 8 than what we have seen before.

It was nice to see Harvick get a win over Truex. I like Truex as well, but he needed some competition that has been lacking. Harvick might just pull this off, don’t count him out of the Championship by any stretch. Same can be said for Keselowski, never, ever count him out. Jimmie, on the other hand, idk, something is just off there.

I’m glad at least one columnist gets this basic fact! ALL of the five drivers who aren’t locked in have to have the mindset that winning is everything at Phoenix. The imaginary cut line is virtually meaningless. Any of the guys at the bottom (including the HMS duo) can win their way in and make Brad’s points advantage disappear. This is what racing should be about, not tiptoeing through the tulips to get a championship by points.

For all the years I watched racing, I never worried about who won the title because I was more caught up in each individual race. Didn’t care if the title was sewn up with 3 races to go…there were still 3 good races left in the season! All this focus on winning a 10 race ‘title’ has sucked all the joy out of each race. Wonder if that has anything to do with lackluster crowds and ratings?

most likely, but its far from the only, or the biggest problem.