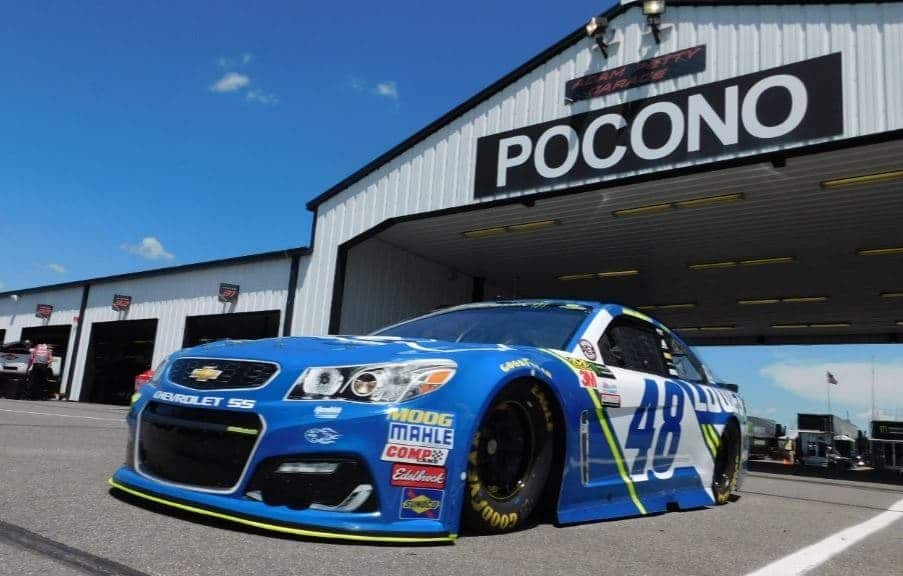 ONE: As the NASCAR Chevy Crumbles

The last two weeks have been painful to watch for Chevrolet’s NASCAR contingent. First, Chase Elliott got taken out in the final laps at Martinsville Speedway, turning the sophomore sensation’s Round of 8 into a slump. His teammate, reigning champion Jimmie Johnson, followed that up with a Texas Motor Speedway tumble that saw him get badly outrun at a track he’s won at four of the last seven times out.

Johnson wound up 27th Sunday, behind a driver in Matt DiBenedetto with one-tenth of the resources, and another, Landon Cassill, who spun out during the race. That leaves the Bowtie Brigade in an almost impossible position heading to Phoenix International Raceway; both Elliott and Johnson need to win to make the Championship 4.

But the problems run deeper in what’s been a difficult year for Chevrolet. Once an automatic to win the sport’s manufacturer title, they sit third with just 10 wins on the year. Perhaps its top young talent, Kyle Larson, spiraled out of the playoffs after the Round of 12. Its most popular driver, Dale Earnhardt Jr., is retiring and getting replaced by young, unproven Alex Bowman. Seven-time champ Johnson may suddenly be the oldest Cup Series full-time driver in 2018 at age 42.

For a company that held 19 of 40 spots on the grid Sunday, that’s a surprising development. Chevy may have more quantity, but it’s clear as of late Toyota has developed more quality. After earning five of the first eight spots in the Championship 4, barring a miracle Chevy will have gone one-for-eight the last two years (and zero-for-four in 2017).

The hope is Bowman, William Byron, Elliott and Larson lead the way for a Chevy uptick in 2018. But if they don’t, will the manufacturer look to consolidate resources in order to compete? And what will that mean for middle-tier teams like Richard Childress Racing that have stuck by the manufacturer for decades? No wonder rumors of other, new manufacturers courting Chevy teams keep sprouting up.

Three races, three DNFs. It’s a terrible time for Larson to have the worst slump of his Cup career. Suddenly, the sole driver seemingly capable of challenging the Toyotas is simply finding it a challenge not to make a mistake.

“Just can’t really execute,” Larson said after his Texas wreck. “Whether it’s bad pit stops or bad luck with whatever happened to our right-front [tire], we had a loose wheel and then had to pit a couple of times to fix it.  We just gave up track position.  We took the best car and just whatever, I don’t know, it’s frustrating, because I know I had the best car and lose track position, and that is what happens.

“You try and move forward and it’s so hard to pass here you try and find some stuff and get in the wall. Can’t wait for the last lap at Homestead.”

It’s the first time Larson’s registered back-to-back-to-back DNFs in a Cup career that, until lately, was taking off. And there’s another intriguing question for him as we look ahead: Who is really replacing Target as the primary sponsor on the car? When Target left the sport, we were told a replacement would be announced in a few short weeks. Chip Ganassi Racing had plenty of lead time, with this company giving indications it would leave for over a year.

Common sense would dictate that one of the sport’s up-and-coming drivers would have no issue finding a replacement. First Data has graced the hood of the No. 42 in recent weeks. But the fact there’s no official announcement here, providing a much-needed boost to the sport for 2018, is a bit surprising. It keeps the storyline going of, “Here’s a major sponsor leaving NASCAR with no similar type of company stepping up to replace it.”

I’ll write more tomorrow on what Matt Kenseth stepping away from the sport in 2018 means for both him and NASCAR. But he was one of the final dominoes to fall in what was one of the more active Silly Seasons in recent years.

Now, we await the future of Danica Patrick and whether she’ll be able to secure one of the few open rides still left: a third car at RCR. Patrick has also been linked to an expansion at Roush Fenway Racing (denied) and even the second team at Furniture Row Racing (denied, as owner Barney Visser claims he’s cutting back to one car in 2018.)

After that? There’s not much left to decide. The third RCR car is intriguing and perhaps someone will step up at the last minute to fund a potential second championship effort at FRR. Kurt Busch has to officially sign his contract at Stewart-Haas Racing, and new driver Aric Almirola may be announced for the No. 10 Ford (that’s expected Wednesday).

Overall though, the dust is settling. Now, it looks like the next big decision to watch is whether Monster Energy will re-up its option to be the sport’s title sponsor.

FOUR: Win and You’re In

NASCAR’s new playoff format certainly has its share of critics. But two clear themes have emerged as the series heads to Phoenix for their penultimate race of the year.

First off, what you do in the regular season matters. Martin Truex Jr. can breathe a sigh of relief this week solely based on what he did in the year’s first 26 races. Sure, he’s got two runner-up finishes in this playoff as the No. 78 runs on all cylinders. But in the past, a bad performance at Phoenix would knock him out. It would keep the year’s most dominant driver from even entering the conversation about the Championship 4.

Instead, Truex is in, along with two drivers who won to earn a slot in Homestead-Miami. It leaves five drivers competing for one playoff spot who all have to up their game. Denny Hamlin is a great example of that. Hamlin has an average finish of 5.0 in the Round of 8 but still finds himself 19 points behind Brad Keselowski. Keselowski’s two stage wins (20 points) in Martinsville made the difference; Hamlin scored just one point in comparison.

If Keselowski advances, that means he gets credit for what the No. 2 Ford did during the whole race, not just a handful of laps. Isn’t that what fans want? For the whole race to matter and wins to make the difference in any sort of postseason format?

Texas got a bad rap this year. Sure, the repave clearly affected the quality of competition, but GM Eddie Gossage did everything possible to create multiple grooves, creating the Tire Monster to drag rubber on the track in April.

That race was better than expected, won by Johnson and reasonably competitive. Then we wound up with a late-race pass for the win Sunday between Truex and Kevin Harvick. That would have been virtually impossible at some of the recent repaves at Michigan International Speedway and Phoenix.

TMS was clearly onto something. But it needs to do more. Gossage should pioneer in the offseason additional ways to ground some age into the 1.5-mile track. Fans will not wait five or six years for the pavement to set in in this NASCAR climate. They’ll just simply stop coming.

A C-plus, in this case, isn’t good enough to stay in school. Let’s hope Gossage has some more ideas this offseason beyond a horse for a retiring Earnhardt.

ANd let’s not forget about Ryan Blaney and Darrel Wallace Jr., both of whom still need sponsorship for the majority of their seasons. Quite frankly, its hard to imagine who will sponsor these cars, despite the talent that’s behind the wheel.

The only creative thing track owners have done is to paint seats in different colors to give the perception that there are actual humans in said seats.

It’s good to see Chevrolet lose. Hendrick will soon find a way to buy them out.

Maybe the emphasis needs to be taken off who wins a 10 race ‘title’ and put back on each individual race. Except that with so many 1 1/2 mile aero tracks the races tend to be mind-numbing. I really didn’t care if the title was sewn up with 3 races left. It still meant that there would be excitement on the track. Not so much now, and the title still rests as much on dumb luck as skill. I was much happier with a season long champ And they complained that the Latford points system was difficult? This one is so convoluted that there’s no sense in even trying to keep up.

At least Chevrolet will show some patriotism and field American-built cars next year after years of fielding imported ( Canada the Australia) cars. I wish NA$CAR would stay out of politics; I just want to see racing. The comment on painting the seats to hide empty seats is right-on (RG72). Lets go back to a full season and stop the Chase/Playoff crap.