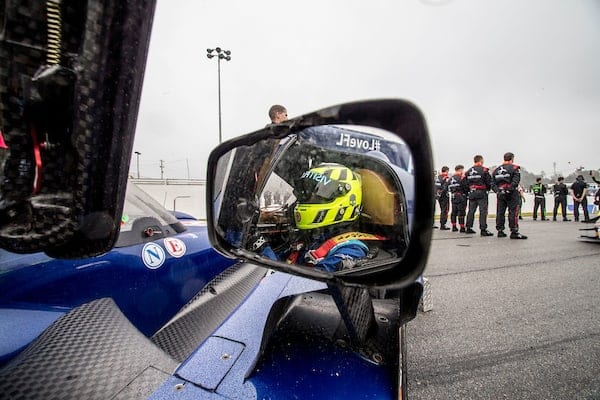 For Holland’s Renger van der Zande, 2017 was a make-or-break year.  After claiming the 2016 IMSA WeatherTech SportsCar Championship Prototype Challenge championship with teammate Alex Popow, van der Zande stepped up to the top flight Prototype class with Visit Florida Racing.  The season was an up and down affair as the team dealt with wrecks and a difficult to handle Riley Mk. 30 chassis.

Our own Phil Allaway sat down with van der Zande to discuss his season, the demise of the PC class and more.

Phil Allaway: Frontstretch.com: How has it been since the change to the Ligier JS P217-Gibson?

Renger van der Zande, No. 90 Visit Florida Ligier JS P217-Gibson: We made the change just before Road America [from] the Riley to the Ligier.  It’s been great from there on.

We’ve been learning a lot about the car.  We’ve had great help from OAK Racing, who built and developed the car.  Road America was a good weekend, but not a great result.  We came to [Mazda Raceway] Laguna Seca and we obviously won.

Van der Zande kind of buried the lead about his victory at Mazda Raceway Laguna Seca here.  He used a two-tire pit stop and excellent form to run down Action Express Racing’s Dane Cameron from 10 seconds back.  With just over two minutes remaining, van der Zande made this move for the lead.

Given that the Corkscrew is a very difficult place to pass, van der Zande’s move for the win ranks as one of the most impressive in recent years.  Even Alex Zanardi, well known for his move known as “The Pass” on Bryan Herta to win at Laguna Seca in 1996, gave van der Zande props.

Thanks Buddy and, actually, well done! If you were the student, you did a better job than whoever inspired you the move! https://t.co/C2IkaXFZDE

Van der Zande’s pass on Cameron was quite a bit cleaner than Zanardi’s infamous pass.  Today, Zanardi likely would have been penalized for his move.

Allaway: As you mentioned, you started off the season in the Riley Mk. 30-Gibson.  Had a third-place finish overall in the Rolex 24 at Daytona, but it was a struggle otherwise.  What differences do the two LMP2 cars you’ve driven this year have?

Van der Zande: I think that the Riley was not developed.  It was a late project, and the car was not ready when we got it.  We were basically doing the testing on that car.  It was not ready to go racing yet.

When we got the Ligier, it was straight out of the box.  The first day of testing, we didn’t have any problems.  It was a much better-developed car.

Allaway: Did the crashes at Long Beach and Detroit really set the team back with the Riley?

Van der Zande: For sure.  [Long Beach] was a big hit.  The car was completely rebuilt.  We had to replace the tub, which [meant]…more than 100 hours of work just to get the car back together again.  That’s never helpful.

We had a brake issue and we still don’t know what it was.  I’m very happy to be in the Ligier now.

Allaway: Racing here in IMSA is your primary gig.  However, you also race a fair amount in GT3 equipment.  Recently, you raced the Callaway Corvette GT3/R in the ADAC GT Masters. The Callaway is potentially coming to the United States to race in GTD next year.  How does that car drive?

Van der Zande: It’s a fantastic car.  A good thing about it is that it has a lot of torque.  The raceability of the car is very strong.  Compared to the other cars that I’ve driven, for example, the Mercedes [AMG-GT3], they might have a little more downforce or a little more precision in how they drive.  But, they have less power.  In a drag race, you’ll beat [your opponent] to the next corner.  I think that’s a big plus in the concept of the car.

Since this interview was conducted, it has been confirmed that the Callaway Corvette GT3/R will be allowed to race in North American series starting at the beginning of the 2018 season.  The reasoning is that there will no longer be any potential competition with the Cadillac ATS-V.R.  In September, Cadillac announced the “sunset” of their Pirelli World Challenge program and the ATS-V.R. that came with it.  The car will be legal to race in both the IMSA WeatherTech SportsCar Championship’s GT Daytona class and Pirelli World Challenge’s GT class.

Allaway: It’s the last race of the season for the IMSA WeatherTech SportsCar Championship, but you have other commitments as well.  What does your schedule look like beyond Road Atlanta?

Van der Zande: I have some testing going on at the Nürburgring, then at Monza.  Then I’m going to go to Macau.

Allaway: Seems like you ran pretty well there last year.  In the Main Race, they only got five laps in before having to throw the checkers.

Van der Zande: It was a bit of a disaster, to be honest, last year.  I think nobody was really satisfied with it.  We only had five laps of racing.  The rest of it was full course yellow or a red flag.

Van der Zande was running in sixth during the Main Race when Laurens Vanthoor clipped the inside wall at 160 mph at Mandarin Bend.  Vanthoor shot across the track and triggered this crash, complete with ridiculous commentary.

With Vanthoor in the middle of the road on his roof, van der Zande in the second green Mercedes was forced to quickly avoid the stricken Audi.  He would be credited with a sixth-place finish since the race did not restart after the crash.  Vanthoor, despite the car, claimed victory due to countback to the last completed lap prior to the red flag.

Allaway: How well do GT3 cars race at Macau?  It is a very narrow circuit in places.

Van der Zande: It’s very narrow, very dangerous, very tricky.  It’s easy to end up in the walls.  During the weekend, the track is developing because it’s not a race track.  Every session, there is more and more grip, which means you’re chasing the car throughout the weekend.

It’s an interesting race, a special one since it’s so dangerous.  It is the biggest thrill that you can get as a driver.

Allaway: The lap at Macau starts with a couple of flat out turns before you get into the twisty bits.  Probably get up to 160-170 mph.  Does drafting come into play?

Van der Zande: Yes, it is quite important [at Macau], especially in Formula 3.  However, for us, it is very hard to overtake with the GT3s.  You really have to wait for a mistake in order to get by.  Otherwise, the only place to pass is in the straight line before Lisboa Corner.  Qualifying is very important.

Allaway: You race all over the world.  However, you’re also a family man. What kind of strain does your schedule put on your family life?

Van der Zande: The amount of days that I am out [of town] is crazy.  I’m all over the place.  The moment that you can be home, you want to do that.

I also run a company at home.  It is an insurance company for race cars.  We insure race cars, mainly in Europe, but some in America [as well].  When I get home, I also have to run that business.

In between sessions, I’m doing policies for race cars somewhere in Europe.  It’s a funny combination, but at the same time, you have to find your time to go with the family.  I have a newborn that’s [14 months] old now.  You want to be there and be with your kid, but it’s tough.  We’ll find the time.  Monday, Tuesday, Wednesday, then daddy is off again.

Allaway: You spent 3.5 years racing in Prototype Challenge before moving up this year.  How much knowledge were you were able to bring from that car to the Prototype class?

Van der Zande:  I think actually quite a lot.  I don’t think people realize just how good that [class] was.  It’s a very rough car, not easy.

You get to tracks like Road Atlanta, there are positions you have to get to and curbs you have to touch to get a good lap time.  Some other cars are easier to drive; you don’t have to drive with such urgency.  With the [ORECA FLM09], if you wanted to be out front, you had to squeeze everything out of it.

For that reason, it’s been very helpful for me.  Coming to a car like an LMP2 with traction control and other systems, you can tune it up more.  Coming from a rough car, it’s only made things easier for me.

Allaway: This year, you had Marc Goossens as your teammate.  What’s it like racing with him?

Van der Zande: He’s a legend.  He’s 47-years old.  Being so long in this sport as a professional driver, I would sign up for that right now. He’s very good with setting up the car.  Very detailed about the setup and I’m learning a lot from him. I think I’m the one who has a couple extra tenths in lap time, and he’s the one bringing a lot of data to the team.  It’s a great combination between the two of us.

At Road Atlanta, van der Zande, Goossens and Jonathan Bomarito were very quick.  Van der Zande was fastest overall in the opening practice session and third during the night practice.  In the race, van der Zande and his teammates started fifth and right up there in the hunt.  However, incidental contact with the Team Penske No. 6 ORECA 07-Gibson damaged the exhaust of the No. 90 Ligier JS P217-Gibson, which led the team to retire the car with 25 minutes remaining.

For the season, van der Zande and Goossens ended up seventh in points with the victory at Mazda Raceway Laguna Seca being the obvious highlight.  The team also finished third overall in the Rolex 24 at Daytona with the Riley Mk. 30.

For 2018, big changes are afoot for van der Zande.  A couple of weeks ago, it was announced that van der Zande will move to Wayne Taylor Racing full-time as Jordan Taylor’s new teammate, replacing Ricky Taylor.