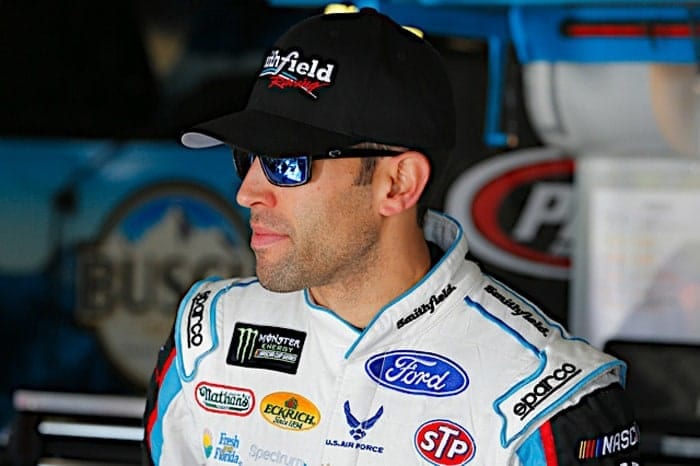 Most of the pieces of the 2018 Monster Energy NASCAR Cup Series puzzle have been filled. Only a handful of spots are left in order to complete the nearly 40-piece set.

One of those is the No. 10 machine, which Aric Almirola will likely pilot starting next year. The current Richard Petty Motorsports driver is finally being revealed as the next driver for Stewart-Haas Racing, one of the worst-kept secrets we’ve seen all year.

In no way is this “breaking news.” It is something that has been expected since Smithfield Foods announced it was parting ways with RPM, even though partial owner Richard Petty claimed the two sides had a handshake deal for next year.

It is clear that money has a stake in this deal. However, Almirola is set to have his first real shot at competing in the top 10 on a weekly basis, assuming he can out-perform his predecessor, Danica Patrick.

While most rides are settled or about to be filled in the Cup Series, the XFINITY Series is a bit iffy. For young Brandon Jones, the future is uncertain.

The results are what was expected of him at RPM, a mid-level Cup team. When the organization started its own chassis department, the team’s potential plummeted overnight. 2016 was abysmal for Almirola, who only finished in the top 10 once.

While 2017 has been a turnaround year for the organization, it is too little too late to keep him around. It is probably the best for both parties.

Almirola is heading to a championship-caliber team in SHR, and RPM is getting a young Darrell Wallace Jr., who will provide more exposure in one season than Almirola did in the previous seven. Wallace will bring something new to RPM, while Almirola attempts to revive a once promising NASCAR career.

The Tampa native will be the new driver of the No. 10 car, or whatever number SHR and Smithfield want it to be (just like when Kevin Harvick replaced Ryan Newman at SHR, the team changed over from the No. 39 to the No. 4).

Things can only go up for the team’s fourth car, which has struggled compared to its other three entries. In six seasons, Patrick has an average finish of 24th.

However, just how much of an upgrade is that for SHR? Well, it could be significant or maybe not. Almirola’s average finish in 10 years of Cup racing is 21.5, only a few spots greater than Patrick’s. The difference here, though, is Patrick competes in significantly greater equipment.

Almirola’s numbers are a bit skewed compared to Patrick. How so? Well, for starters, his Cup career took off with a descending Dale Earnhardt Inc. before landing a part-time gig with the also now-defunct Phoenix Racing.

When he signed on with RPM to race full-time, the 2012 Daytona 500 was his first Cup race in nearly a year and a half, dating back to November 2010 at Homestead-Miami Speedway. He simply didn’t have the experience to carry RPM at first like he wanted to.

But once he settled in, Almirola showed he can get the job done. 2013 and 2014 proved to be career-making years for him, as well as this past season. Even in mid-pack equipment, he’s managed to earn a handful of top 10s and put himself in the spot he is in now, being elevated to SHR.

Not only is Almirola bringing over a steady sponsor, which will cover a chunk of the races as a primary paint scheme, but as corny as it sounds, he brings potential.

It’s potential he seldom saw come into fruition at RPM. Now, he has a chance to do something special. Ideally, he can give SHR four championship-caliber cars, rather than three with one mid-packer.

Experienced and ready to win, Almirola may be exactly what the doctor ordered for SHR. A fresh start with a top organization can go a long way. Add in a dedicated sponsor and you have a combination that could certainly make the 2018 playoffs.

Q: Is Brandon Jones in NASCAR next year, and if so, where and in what series? – William S. De Pere, Wisconsin

A: Money can go a long way in racing. So can a great personality. Fortunately for Jones, he has both.

Jones failed to replicate the results he put up during his rookie year with Richard Childress Racing, and 2017 is not what anyone expected out of him.

His No. 33 car has been prematurely loaded into the hauler seven times this year. While veteran teammate Brendan Gaughan has five DNFs of his own, the number seven is clearly not a lucky number here.

Bad luck aside, Jones just hasn’t performed well in 2017. His average finish is 21.8, worse than Ross Chastain, Ryan Sieg and Dakoda Armstrong, each of whom has a fraction of the budget Jones has. When it looks like he’s having a top-10 run, something happens to prevent that from happening.

Even if RCR boots Jones, he will be fine. He’s developed quite the relationship with MDM Motorsports, a Camping World Truck Series and ARCA Series team, running part-time with them this year.

His father, JR Jones, is the President and CEO of Rheem, a longtime NASCAR supporter. He isn’t going anywhere anytime soon.

If he isn’t at RCR next year, expect Jones to remain in the XFINITY Series. It could be with GMS Racing, which may have an opening should Ben Kennedy not return or it wants to start another team. He may even land at Chip Ganassi Racing, with that squad losing Tyler Reddick to JR Motorsports and reportedly seeing Brennan Poole move to the Cup Series in that elusive RCR ride.

There is also the option of returning to the Truck Series, where he’s run well in the past, earning seven top fives and 15 top 10s in 35 contests. However, he certainly deserves one more shot in the XFINITY Series.

Should he get another chance with RCR, he must do better in 2018. Missing the playoffs is not acceptable with such a large team. However, Jones will come into 2018 with a vengeance, knowing he must perform if he wants to be successful in this sport.

Oh dear. Ah, no just no. Don’t see it…at all. Aric seems like a super nice guy. You can knock me over with a feather if he suddenly starts performing at the level of the good drivers at SHR, even he is a little ahead of Danica in “points”, that ain’t saying much. Oh well the “it’s great parade” will continue, more NASCAR BS.

Agree, Aric won’t add much except money to the Haas team. Haas is still funding Bowyer out of his pocket, along with most of Kurt Busch. Smithfield money will be welcomed. Tony isn’t doing a good job getting sponsors.
Hey, Boater won some rain shortened races back in 2012, over 5 years ago lol.

One win in EIGHT YEARS. Great smile. Will find something else to do on race day.