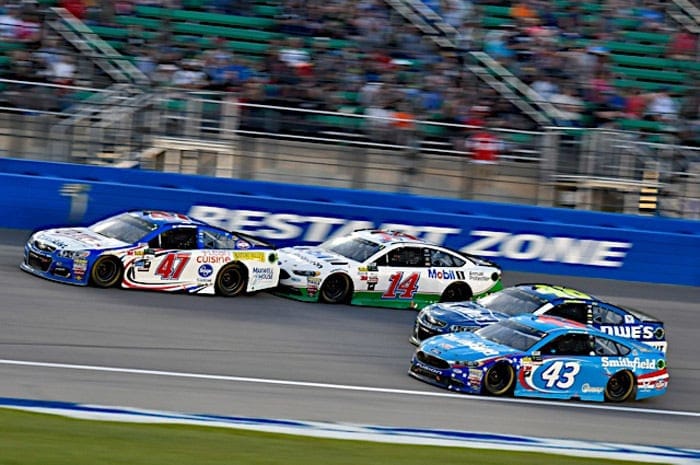 This season is almost over, but not all the dominoes from Silly Season 2017 have finished dropping, which means that underdog drivers are racing for their jobs next year, and their race teams are seeking survival. Why is this important? Because of all the behind-the-scenes employees who could potentially be out of work if their race team shuts down – the office workers, the mechanics, the hauler drivers.

Matt DiBenedetto returns to Go FAS, Ty Dillion stays at Germain and the JTG Daughtery duo of AJ Allmendinger and Chris Buescher will stay put. But teams like Front Row Motorsports have yet to confirm their 2018 lineup, and BK Racing has been plagued by financial uncertainty all year. Can alliances with larger teams like Richard Childress Racing continue to work well for these smaller teams? Will first-year full-time Cup Series teams like TriStar Motorsports or Rick Ware Racing be able to return? Will Premium Motorsports or Circle Sport continue to rotate drivers? Could the part-time teams like Motorsports Business Management, Beard Motorsports or Gaunt Brothers Racing be back for the restrictor-plate mayhem, or even more?

There are still plenty of questions for teams to answer.

Top of the class: Texas: Playoff contender Blaney led nine laps and finished sixth in the No. 21, but needs to cross the line first next week in order to race for the championship in Miami: “We need to try to go win the race, that’s really the only thing we can do.”

Almirola had back-to-back top-20 finishes for the Petty No. 43 with his run in 15th, and the No. 47 of AJ Allmendinger ended a rough month with a very good lead-lap 16th-place finish.

Passing grades: Michael McDowell was 21st, followed immediately by Chris Buescher, with Ty Dillion, DiBenedetto and Landon Cassill clocking in at 24th through 26th – all of which are good runs for their teams. Cole Whitt finished 29th for TriStar, which opened the season strong before the realities of underdog life set in.

Needs Improvement: David Ragan was 30th in the second Front Row car, followed by Reed Sorenson (31st) and Joey Gase (32nd). Jeffrey Earnhardt matched his car number at 33rd, which is a decent run for the Circle Sport/TMG team. Ray Black, Jr. was 34th in the No. 51. David Starr (MBM No. 66) and the BK Racing pair of Corey Lajoie and Gray Gaulding brought up the rear due to an accident and engine failures.

RPM picked up a three-race sponsorship deal for next season with Click n’ Close, including the Daytona 500.

How many times will I hear this weekend @TXMotorSpeedway "Ain't you that dude that flipped like 15 times, man I thought you were dead?"

Part of my friend letting me stay at his place for the weekend in Fort Worth includes babysitting his kid tonight while he’s gone pic.twitter.com/VLAAbxl2B5

Seems the obvious leadership or lack of starts at the top, and trickles down..CASTLE DAYTONA. But some teams IMO must bear some of the responsibility as to who they hire. ARIC is a panacea for now, as DANICA was. I heard something somewhere that TONY said he only wanted drivers who could win. Well he has two of them since the start of SHR, it was Tony and KEVIN, and KURT too when he came on board, now and then. Danica a resounding no, and ARIC a no as well, sorry. So Tony as other teams are taking money for sponsorship for the short term, in Danica’s case a very nice run (sponsor wise) But I wonder when other potential wannabe sponsors see the hype of the Danica’s and now Aric (and he will be promoted), if a potential sponsor checks in on the sport via TV, sees how the coverage is garbage, where is that incentive to even think about a race of 10, 20 or 1? Their potential driver is mid pack at best…and you get nothing for your dollar on TV. I get the pull of the money, but these teams take money, good money for non marque drivers. IMO. The whole thing is a mess with no easy answers. A double edged sword. Is ARIC as DANICA was, in the same class as Kevin or Kurt? Are you not hurting talent wise the SHR brand of top notch excellence? Just asking…I don’t know…seems weird, and yes it is business.

I applaud the money as it employees so many wonderful hard working people. But I am worried as to how this can last for so many at it’s current state?

It is interesting when you hear I only want drivers who could win and you have a proven winner in Kenseth and he isn’t getting an opportunity…it is clear that he is still competitive…he may not have any wins this year but he is still running better than all of the other drivers getting consideration. The decisions mystify me when you look at the change that took place when Kenseth went to Gibbs…7 wins in his first season with a new team.

TV coverage is the other big issue…a few races ago when Kenseth was parked for 7 men over the wall it was interesting that there was an article about Lajoie getting the same penalty a few weeks earlier and why no one was outraged…the answer to that question is simple, the broadcasters didn’t cover it…he got parked and was listed on the ticker as “out” but no one ever commented as to why he was out…so it is a mystery why sponsors would want to spend their sponsorship dollars on a driver that rarely gets a mention and the sponsorship on the vehicle is rarely even visible on TV because those cars are never focused on.

It is a weird time…good points.