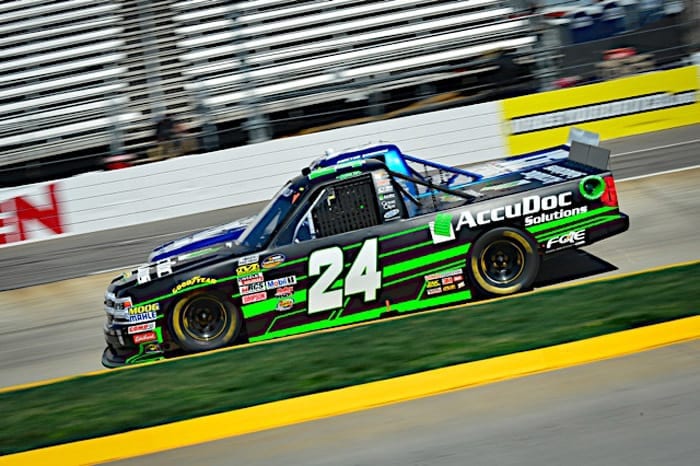 This weekend’s tripleheader at Texas Motor Speedway was fairly uneventful in terms of penalties.  NASCAR did not find any violations on the Monster Energy NASCAR Cup or XFINITY Series cars that they inspected.

There was a post-race fight between Richard Childress Racing’s Brendan Gaughan, JD Motorsports’ Ross Chastain and their crews after Saturday night’s XFINITY race.  Despite one JD Motorsports crewmember being sent to the hospital, no fines were assessed.

In the Camping World Truck Series, the GMS Racing No. 24 team of Justin Haley was given a L1-level penalty after both the front and rear of his Chevy Silverado exceeded the proper post-race inspection tolerances. The team’s fifth-place finish will be encumbered as a result, meaning it cannot be used in a tiebreak situation.

Haley’s crew chief, Kevin Bellicourt, was fined $5,000 for the infraction and is suspended for Friday night’s Lucas Oil 150 at Phoenix International Raceway. The team will also lose 10 driver points and 10 owner points.  Haley will not lose the 12th spot in Camping World Truck Series points as a result of the penalty.

During the post-race wheel check, one lug nut was found to be improperly installed on Christopher Bell‘s No. 4 Kyle Busch Motorsports Toyota Tundra. As a result, Bell’s crew chief Ryan Fugle was fined $2,500.

Wouldn’t all race cars fail the ride height after doing obnoxious burnouts and blowing the tires? It reminds me how NASCAR always overlooked the pain medication Jeff Gordon was taking for his back, but ruined The Dinger for an alertness pill. Who’s more dangerous out there in a race car, someone hopped up on pain meds or a driver who is very focused?