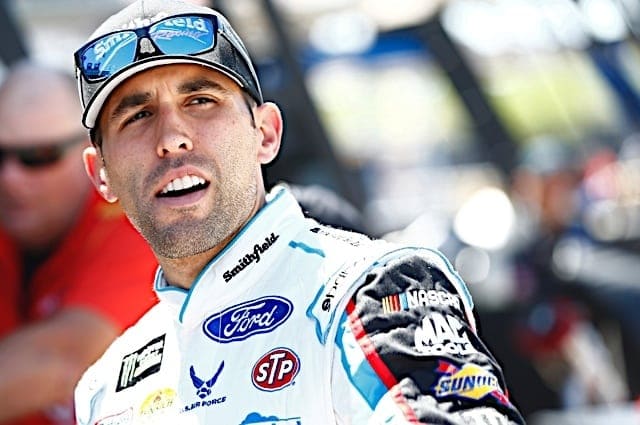 The question is: Who will have a better 2018 season: Almirola or Wallace?

Aric Almirola is primed for a breakout season in 2018 and will shut some of the haters up along the way.

He’s leaving Richard Petty Motorsports for the greener pastures of Stewart-Haas Racing, where he’ll pilot the No. 10 Ford, replacing Danica Patrick. And I’m really excited and eager to see how he does.

I firmly believe that Almirola is just flat out a better NASCAR driver than Patrick. Is he a better race car driver? That’s tough to say, given Patrick’s open-wheel record. But when it comes to stock cars, I’d side with Almirola in terms of the ability to drive.

But I’m not going to sugarcoat it: both have been disappointments in their respective Monster Energy NASCAR Cup Series careers. For Almirola, it’s been mostly due to circumstance, though.

He’s been with RPM driving the No. 43 since the beginning of the 2012 season, but that organization hasn’t kept up with the likes of Hendrick, Joe Gibbs, Stewart Haas and Penske for a considerable amount of time. Simply put: they don’t have what the others do.

And it’s showed in the statistics. Almirola’s best statistical season to date came in 2014 when he earned his first, and only, career win at Daytona as well as seven top 10s and two top fives. Those aren’t impressive numbers, by any means, but that’s not necessarily Almirola’s fault.

Neither Marcos Ambrose or Brian Scott performed well while they were at RPM. And even though Sam Hornish Jr. performed a bit better than those two, he only stuck around for a year.

Maybe it’s been the organization, the equipment and the situation that’s held Almirola back. Not the driver.

That’s why I think this move to SHR is one that both Almirola, as well as the race team, needed. It’s a premier team at NASCAR’s top level with top-notch equipment. It is going to be a breath of fresh air for the Tampa, Florida native.

Almirola’s statistics at RPM are far superior to Patrick’s while she was at SHR. She’s only amassed seven top-10 finishes since 2012, whereas Almirola has earned 29 in inferior equipment.

I’m not saying Almirola is going to compare his performance in the No. 10 to Patrick’s, but I know that it’s going to be a hell of a lot better.

Plus, what teammates has Almirola had to lean on for advice? Answer: none this season, and inexperienced ones in the past. He’s now going to have former champions in Kevin Harvick, (more than likely) Kurt Busch and Tony Stewart, who Almirola himself said befriended him back in their Joe Gibbs Racing days, as an owner. Oh, and Clint Bowyer isn’t a bad teammate to have talent-wise, either.

Having a sponsor that is committed to you in Smithfield doesn’t hurt things as well. We see so much of sponsorship money determining who’s in and who’s out in the sport nowadays. That can cause an immense amount of stress on the driver behind the wheel during the season. And Almirola won’t have any of that to worry about. His focus will be 100 percent on the race track.

But in terms of Darrell Wallace Jr., the main thing that I always come back to is experience. Yes, his handful of races in the No. 43 car this season subbing for the injured Almirola helped in his progression to a Monster Energy NASCAR Cup Series drive immensely.

With that said, he’s a rookie, and he’s going to earn his rookie stripes for sure. I do think his 2018 season will be a good one, but not as good as he’s accustomed to as he’s been working his way up through the racing ranks.

Plus, for all the reasons I’ve already laid out, Richard Petty Motorsports is behind. Stewart-Haas Racing is not. I think the mix of RPM’s equipment, Wallace’s inexperience and the circumstances surrounding the 2018 season will mire him in the top 20, whereas the former driver of the No. 43 will be closet to the front in the No. 10.

Next year will be Almirola’s first legitimate shot to compete for wins on a weekly basis. It’s going to take some time and there will be some bumps in the road, there’s no doubt about that. But when it’s all said and done, he will bring SHR multiple wins, some playoff appearances and a significant uptick in performance in the No. 10 car. – Davey Segal

Bubba’s in for a King-sized Year

Darrell Wallace Jr. is a fantastic driver who will outperform Aric Almirola in 2018.

That is not a knock on Almirola’s ability. He is a tremendous driver and he provides a unique personality that is under-utilized by NASCAR. However, it is Wallace who has all the makings to be a huge star in the sport.

Wallace’s charisma and charm are only matched by his best friend, Ryan Blaney. I could watch those two goof off and prank each other all day. You put the two of them in the Monster Energy NASCAR Cup Series and out will come some of the most entertaining content we have had in years.

Because of his personality, Wallace already has a larger fan base than the average rookie. If Wallace can back this up with great performances in the No. 43, then he has the potential to bring in larger sponsors than Almirola (although that Smithfield deal is hard to beat), and bigger sponsorships equal more money for the team to buy speed.

Of course, none of those details mean that Wallace will have success on the track; Wallace’s immense ability behind the wheel is what will give him the leg up in that category.

Wallace filled in for Almirola while he was injured earlier this season and his average finish was better than the new No. 10 driver. Almirola has an average finishing position of 19.2 on the year, while Wallace has a 17.8.

You can argue that Almirola will be in better equipment than Wallace in 2018 because there are a lot more money and resources available at Stewart-Haas Racing, but I am not sure that the No. 10 is a better race team than the No. 43.

Kevin Harvick is in the thick of a championship battle for SHR, but I have heard rumblings that the team gives the No. 4 all of the best stuff. Meanwhile, the No. 10 is an afterthought, with Danica Patrick driving older chassis most of the time.

Obviously, Almirola is an upgrade from Patrick, but if the No. 10 were truly superior then the car would consistently beat the No. 43. That has not been the case.

Almirola finished seven spots or higher than Patrick in the point standings from 2013 to 2015. Last season was the only time that Patrick has beaten him in points when she topped him by two spots.

In 2017, Almirola has missed seven races and only trails Patrick in points by two spots. This would not be the case if Patrick’s equipment was truly superior to Richard Petty Motorsports.

Almirola will be an afterthought at SHR, with Harvick, Kurt Busch (maybe) and Clint Bowyer hogging the spotlight and the best resources.

At RPM, Wallace will be the sole focus—one of the only perks of driving for a one-car team.

Also, we do not even know if Almirola is the same driver that he used to be.

Ever since his wreck at Kansas Speedway where he fractured his back, Almirola has appeared to be driving scared. He finished fourth at Talladega Superspeedway and ninth in his return to Kansas, but both of those were a result of most of the field wrecking. Almirola got through those wrecks by being so far behind the lead pack that the wrecks were over by the time he got there.

I could be wrong about Almirola being scared, and I honestly hope that I am, but it is just something to watch for. I know if I hurt myself while driving then I would certainly be terrified of it.

Wallace is going to do great things in the No. 43. He earned this ride and it is cool and rare to see a driver get a ride based on talent and not sponsorship dollars.

If you think that Wallace is getting this ride because Petty is going to a more diverse driver, then you need to do your research. Almirola is a Cuban American, the son of a Cuban immigrant, and is therefore just as diverse, if not more so, than Wallace. – Michael Massie

The hype of Wallace since he was in and out of a ride is amazing. Time will tell what he does. I say not much, more of the same old tore up race cars. Another Danica. I feel while has wins in the lower truck series. I just don’t see him with any type of serious commitment, goofing off all the time and acting as if he is owed something. I dunno, something just does not ring “serious” to me regarding his racing or himself to the sport. I could be wrong, again time will tell. But I doubt it, I really do. He has been given many chances….I think there were better choices.

Yep, Bubba still has zero xfinity wins in 3 years, now that’s ” earning ” a cup ride for sure.
Petty has no shop, doesn’t have a selected car brand, and on , doesn’t have any major sponsor. Maybe bubba doesn’t race this year. Petty is hoping diversity brings a sponsor of maybe NASCAR promised him money to run bubba. Things to think about.

Almirola should out preform Bubba based on equipment, but I think Bubba will surprise some people with some strong runs. Funny that people are going after Bubba for getting that ride because of “diversity” when he has multiple Truck Series wins, outran Almirola in the 43 and has shown he can compete. I don’t hear anyone going after Alex Bowman for getting the 88 when he has exactly 1 NASCAR national series win (this October).

Probably the most interesting story in the off season will be the adventures of RPM even getting to the track next year. Me thinks they will set a new Nascar standard for satellite team. And who is going to funding this little adventure? My guess is one of the manufacturers, it certainly isn’t going to be the two sponsors they have named so far.