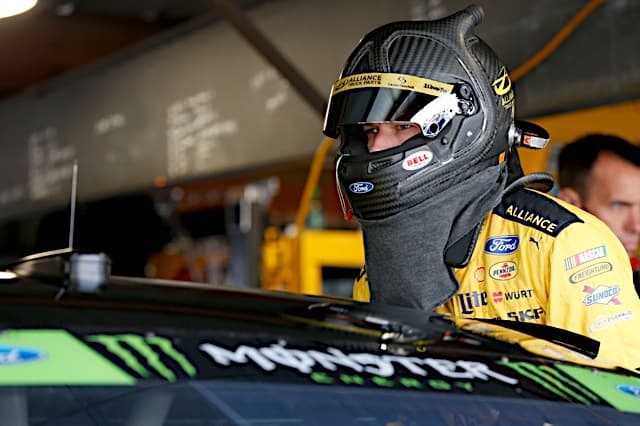 Will Brad Keselowski Hang On to Championship 4 Spot?

Sunday’s Can-Am 500 at Phoenix International Raceway is where the Monster Energy NASCAR Cup Series championship at Homestead-Miami Speedway will be set. With Kevin Harvick, Martin Truex Jr. and Kyle Busch locked in the title race, there is one more spot yet to be decided among the five remaining playoffs drivers.

Entering Arizona, Brad Keselowski is the guy with the odds in his favor. Not only does he have a solid 19-point cushion over the cutoff line, but he’s also had the experience and the season to pull it off. Recently, 2017 has seen a bump in performance, with Keselowski winning Talladega Superspeedway and scoring back-to-back top fives in the Round of 8. Additionally, the No. 2 Team Penske crew has gathered 10 straight top-15 finishes, proving to provide consistency when necessary.

Track history also doesn’t look too bad for Keselowski, who finished fifth in the spring, his latest of eight top 10s in 16 starts. In fact, he has only one finish worse than 14th since 2011. By the history books, Keselowski will be in the top 15 on Sunday.

But will that be enough? A day without stage points, like Sunday at Texas, could be the deciding factor, as you can gain or lose 20 points alone through stages. With Denny Hamlin as his closest competitor in fifth, it may be crucial for Keselowski to run top 10 all day to ensure less-stressful closing laps.

But Keselowski should count his lucky stars given what took place at Martinsville two weeks ago. Hamlin was leading on the white flag and Chase Elliott was also a prominent face up front before the contact with Hamlin ended the night. If either of those men took victory, Homestead may have been set even before the green flag at Phoenix and Keselowski’s position would be even further in doubt.

The 2012 champion has been placed in the fire a few times before since the debut and update of the championship format. After holding off Jimmie Johnson in a week-to-week battle in 2012, Keselowski turned into Talladega Victory Lane on a must-win weekend in 2014 and did the same this year.

Though the position is different, the mindset could very well be the same for Bad Brad on Sunday.

It had been a while, but Harvick closed in on another victory last weekend at Texas Motor Speedway, pulling off the shocking pass on Truex to win for only the second time of 2017 in the Cup Series.

Now, as he enters his best track, Phoenix, this weekend, will Harvick ride momentum to the Championship 4? Wins haven’t come as easy this time around like they did during his 2014 championship run, but a breakthrough on the 1.5-miler of Texas could have set them up perfect for Homestead.

But before we get there, we have the final race to set the Championship 4 in Phoenix, where Harvick has won a record eight times in 29 starts. Since the circuit was repaved in 2011, Harvick has been the Cactus King, scoring six wins in the last 10 races, including four straight victories and a wild 1,064 laps led.

However, things have settled the last two trips, as Harvick has failed to lead a lap and has finished fourth and sixth, respectively. The last time he went back-to-back Phoenix races without a win? 2011-2012, the first two races after the repave. In other words, a long time ago.

But this time around, he’s got nothing to lose.

Who Makes the XFINITY Series Championship 4?

Though the XFINITY Series is the proverbial step down from Cup, the action is set to be even better for Saturday’s Ticket Galaxy 200 from Phoenix.

It starts with the point gap on the cutoff line that comes down to only five points between Brennan Poole and Matt Tifft. Behind them, Cole Custer and Daniel Hemric are within arm’s reach of the Championship 4, while Justin Allgaier, William Byron and Elliott Sadler sit in a little better position above the line.

It’s been a big year for JR Motorsports, which has held the top three spots in points nearly all season long. Allgaier, Sadler and Byron are 15 to 24 points to the green; unless a Kyle Larson-type blow up occurs, they should be good for Homestead. But keep those eyes open, as always.

Poole is where it really gets interesting, as the second-year Chip Ganassi Racing driver is just five to the good. Overall, 2017 has been a stable year from last, scoring the same amount of top fives (four) and only one less top 10 (16 to last year’s 17). Additionally, his average finish has taken a hit from 2016’s 12.4 to this year’s 13, and he will has more DNFs this time around.

However, driver No. 48 has shown improvement when he’s needed to, scoring three straight top fives in the opening two rounds and sandwiching those with consistent top-15 finishes. The uptick has been enough to keep him ahead of his closest competitor in Tifft, who has also shown his best in the playoffs. The Joe Gibbs Racing rookie has managed to score six straight top 10s, something two-time winner Allgaier has not done in 2017.

With those two sure to be close on Saturday, Custer and Hemric, sitting 13 and 18 points back, must partner top stage finishes with a strong race result to stand a chance against Tifft and Poole. Ryan Reed, on the other hand, is likely in a must-win situation, sitting 33 points back in the eighth spot.

Who Makes the Truck Series Championship 4?

The Camping World Truck Series wraps up its action-packed Round of 6 with the penultimate race for the championship at Phoenix. In this battle, there are those already locked in, those needing to win and those who will count every point from the drop of the green in Friday’s Lucas Oil 150.

Austin Cindric is the rookie holding the last spot entering the desert, sitting five points ahead of Ben Rhodes. Both young men have scored their first victories in this second half of 2017 and have proved to be consistent in the playoffs.

For Rhodes, however, the consistency of five straight top 10s has taken a hit, with finishes of 23rd, ninth and 18th in the last three races. Definitely hit-or-miss since that Las Vegas Motor Speedway win.

This hasn’t been an issue all season for Cindric, as the Brad Keselowski Racing driver has only one finish outside the top 10 (15th at Chicagoland Speedway) in the last 13 races. Hot off a second-place finish at Texas after leading his most laps in one race (36), Cindric is expected to at least deliver a top 10 on Friday.

This is where the action will happen in the title battle, as John Hunter Nemechek must win, 39 points back, while Matt Crafton and Christopher Bell are in good standing above the cutline. Nemechek did score both his season wins on 1-mile tracks Iowa Speedway and Gateway Motorsports Park, so Friday could be his best opportunity on his best type of track.