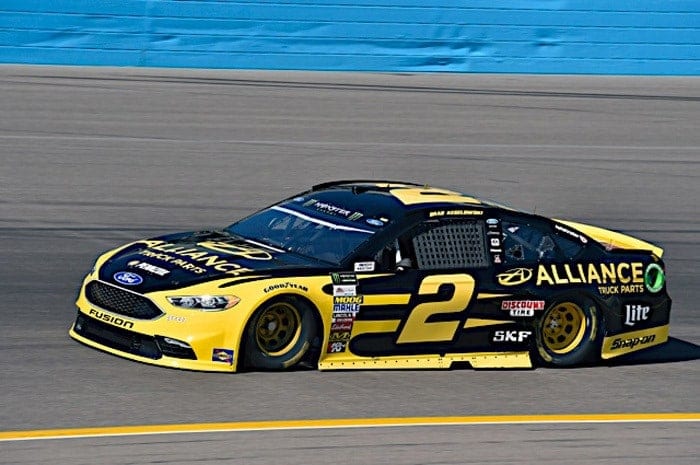 DraftKings’ daily fantasy NASCAR heads to Phoenix Raceway this weekend for the Can-Am 500. This race marks the final event of the Round of 8 in the Monster Energy NASCAR Cup Series playoffs. The green flag flies Sunday afternoon at 2:30 p.m. ET on NBC.

Here are eight drivers to keep an eye on this weekend for your DraftKings lineups.

This week’s fantasy forecast is brought to you by DraftKings, the No. 1 platform for Daily Fantasy Sports. You can jump in on all of the daily fantasy NASCAR action at Phoenix this weekend by signing up at this link for a free entry into one of this weekend’s contests. All you have to do is make a $5 deposit to get started!

Harvick punched his ticket to Homestead last weekend with a win at Texas. This weekend at Phoenix, he is again the overwhelming favorite to grace Victory Lane.

Harvick’s eight career Cup triumphs at this one-mile oval are the most in track history. He has won six of the last 10 races there and finished no lower than sixth since taking over the No. 4 Stewart-Haas Racing Ford in 2014. While that sixth-place run came in March, ending a streak of seven straight top-five performances you shouldn’t be concerned. This track is one Harvick and crew chief Rodney Childers have completely figured out.

With a guaranteed spot in the championship race, Harvick is only racing for the win this weekend. Expect him to be leading laps up front and in contention throughout.

Johnson has four wins at Phoenix over his 15-year career. In 28 starts at the track, he has finished inside the top 10 in 20 of them. The veteran finished ninth here in the spring and has qualified 12th for Sunday’s race.

In order to keep his 2017 title hopes alive, the seven-time Cup Series champion will need to win at Phoenix. At Texas, the No. 48 team struggled with mechanical issues all weekend, and Johnson finished an uncharacteristic three laps off the pace. Don’t expect that type of bad lightning to strike twice, especially with an entire season on the line for this group.

Keselowski has eight top-10 finishes in the last 11 races run at Phoenix. He finished fifth earlier in the season, his fifth top-five finish in 16 starts at the track.

The driver of the No. 2 Ford is 19 points to the good heading into this race. If it comes down to points, all Keselowski needs to do ensure that he is a contender in Miami is not screw up this weekend. A solid top-10 finish would do the trick, unless another driver fighting for that final playoff spot wins.

Elliott has been, by far, the best-running Chevrolet during the playoffs. His worst finish, other than the Martinsville incident, was a 16th-place result at Talladega. He has five top-10 finishes, including three runner-up results, over the course of the eight MENCS playoff races.

Elliott has made three starts at Phoenix with finishes of eighth, ninth and 12th. That 12th-place finish came back in March of this year. But even though it was his worst finish of the three Phoenix races, it was his most dominant. Elliott led 106 laps and recorded 53 fastest laps, scoring valuable DraftKings points in the process.

It’s win or bust for Elliott this weekend, and he has run very well at this place. Don’t ignore him when setting your Sunday roster.

If something does happen to Keselowski, Hamlin is in the best spot to lock up the final MENCS playoff position on points. Phoenix is the perfect place for him to cash in on the opportunity.

Hamlin has seven top-10 finishes in the last 10 Phoenix races and is riding a four-race top-10 streak at the track. His one win at this oval came back in 2012, over five years ago but the No. 11 enters the race with momentum.

After Martinsville, Hamlin has shown he is willing to do anything to win. Now, where his back is against the wall, that pressure is multiplied. Expect a quality, aggressive performance from this driver on Sunday.

Earnhardt has three wins at Phoenix, most recently in the fall of 2015. That victory is one of five top-five finishes for Earnhardt in the last eight races at Phoenix.

Although the performance of the No. 88 team as a whole this season has been disappointing, the car has run fairly well as of late. Earnhardt has finished inside the top 12 in five of the last six races and will be looking to finish his career strong. Sunday is his last, best chance for an upset victory before the year is out.

Although Suarez has only made one start at Phoenix on the Cup level, that start was a good one. He qualified deep in the pack in 27th and worked his way to a seventh-place finish. That was his first of 12 top-10 performances in what has been a solid rookie season.

Suarez has turned on the jets the second half of the year and become a weekly top-10 contender. He is priced nicely at $7,500 and has a great shot at another top-10 finish this weekend.

Newman won the spring Phoenix race in a wild finish. He was the first of what turned out to be a handful of surprise winners in this 2017 season. The veteran started in 22nd, then spent most of the race running midpack. However, Newman took advantage of a late-race restart via pit strategy and picked up his second career Phoenix win.

While Newman has had a few brilliant races this season, he has also been all over the map. The Richard Childress Racing driver is averaging just worse than a 15th-place finish on the year. But, as of late, it seems Newman is getting more attention during these playoffs from how he runs as a late-race lead-lap driver. The No. 31 team has clearly not given up despite getting knocked out after the Round of 16.

Now, this veteran is priced lower than expected for Phoenix and runs well there. Keep him on your radar when finishing off Sunday’s lineup picks. 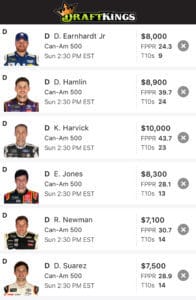 Childers and Harvick both have said repeatedly they have lost the handle on Phoenix since the reconfigure. Bad recommendation. And the #48? What have you done for me lately?

Or you can take the #18, led over a hundred laps in the Spring when JGR was otherwise struggling, and only lost on strategy at end of race.