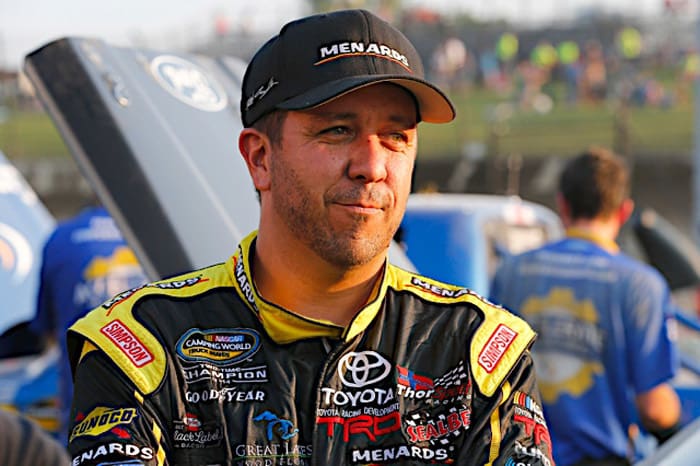 For 17 years, Matt Crafton has made his career in the Camping World Truck Series. And following a report from motorsport.com last week, he’ll continue sitting behind the wheel of the No. 88 Toyota through at least the 2018 season.

“It’s been an honor to be with ThorSport Racing,” Crafton told motorsport.com. “I’ve always said I’d be happy to stay in the Truck Series and end my career in the Truck Series because it’s just awesome racing. I truly, truly love it here and with the owners I have, you could never ask for better owners. I’ve worked around and seen a lot of owners come and go, but Duke and Rhonda have always been a man and woman of their words.

“They’ve always told me I can be here as long as I want to be and just keep winning races and contending for championships,” he continued. “How many people in this sport can you say have done that? I’m very, very happy to be racing another year for them next year and hopefully, many years after that. I’d be happy to end my career at ThorSport and remain there until I’m ready to bow out.”

The 41-year-old made his Truck Series debut at Auto Club Speedway in 2000 season finale, driving the No. 88 ThorSport Chevrolet. He started 17th and ended up ninth behind eventual winner Kurt Busch. He did, however, finish ahead of drivers like Ken Schrader, Rick Crawford and Dennis Setzer, to name a few. Not bad for a debut race.

The following season, he returned to the organization full-time and ran for Rookie of the Year but was edged by Travis Kvapil. In 24 races that season, he finished in the top 10 just 11 times and had five DNFs, four of which were for engine failures. Given the level of competition in the series at the time, the rookie finished the year a respectable 12th in points.

He remained with ThorSport for two more years before moving over to the now-defunct Kevin Harvick, Inc. for the 2004 season. Behind the wheel of the No. 6 Chevrolet, Crafton scored six top fives and 17 top 10s in 25 races and ultimately ended the season fifth in the championship standings.

Fast forward to 2005, and he returned to ThorSport, where he’s remained every year since; and to credit team owners Duke and Rhonda Thorson as the major reason he still runs with the team would be absolutely correct.

“The biggest thing is Duke and Rhonda Thorson. They’ve been so loyal and [Duke] has been a man of his word; everything he’s ever told me, he’s done,” Crafton told Frontstretch at Kansas Speedway a couple years ago. “There’s so many owners that you deal with in this sport that aren’t close to that. The year after I left and went to KHI, I had opportunities with other places, and I talked to Duke Thorson and he told me again what his game plan was from day one.”

It wasn’t until the 2008 season, Crafton’s eighth full year behind the wheel of the No. 88, that he brought the organization its first victory, which coincidentally happened to be his first career win. It came at Charlotte Motor Speedway where he edged Chad McCumbee (recognize that name?) in a green-white-checkered finish. The win, which came in his 178th career start and broke the record for longest winless streak before a victory in Truck Series history.

“Finally we can shut [our critics] up. It’s awesome,” an elated Crafton said after that race. “Perseverance pays off and we never gave up. I’ve got a really good group of guys behind me and have great owners, Duke and Ronda Thorson. It’s been a black cloud following me for a long time, so finally the black clouds have moved on and maybe we can get a few more this year.”

He ended that year fifth in the championship standings, matching his career-best that was set in 2004, his lone season with KHI.

The following season, ThorSport dove in and brought a second full-time truck to the fold, and along with that second team came Johnny Sauter. The veteran helped to bring the team to a different level, and even Crafton pushed himself to surpass 20 top-10 finishes in a single season for the first time in his career.

“Johnny has definitely, definitely been a great help to the whole organization. I had teammates and stuff that were here [before], but I was always the veteran trying to teach the rookie,” Crafton told Frontstretch from Kansas Speedway a couple years ago. “And now I’ve got another veteran to lean on, and you see the teams that are more successful in the Truck Series usually have more veterans to bounce stuff off of and push each other. At the end of the day, you want to beat your teammate. If your teammate raises the bar, you push to beat him.”

Come 2012, ThorSport made the move from long-time manufacturer Chevrolet to Toyota, and the mile-and-a-half program suffered for the first part of the season. But after rebuilding its trucks mid-summer, the performance started to turn around. Though Crafton didn’t win a race that year, the momentum built straight into the 2013 season.

The 2013 season was what many would call a dream for the driver of the No. 88 Toyota. Though he won only once, at Kansas, he scored seven top fives and 19 top 10s in 22 races, including a stretch of 16 straight top-10 finishes from Daytona through Chicagoland. He ended 2013 by giving ThorSport its first championship, edging Ty Dillon by 40 points.

The following year, Crafton made history when he became the first back-to-back champion in the Truck Series’ 20-year history. He won twice and had 13 top fives, 17 top 10s and an average finish of seventh, nearly matching his career-best of 6.7 from the 2009 season when Sauter joined the organization.

To this date, it’s a feat that hasn’t been matched, though a victory by Johnny Sauter at Texas Motor Speedway last weekend locks him into the Championship 4 and gives him a shot at going back-to-back this year.

The 2015 and 2016 seasons saw Crafton come close to winning the championship, though he was bested by Erik Jones and Sauter, who has since moved on to GMS Racing, respectively.

Many have questioned why Crafton hasn’t moved up, and there are several theories that float around on occasion, some of which aren’t too kind to the tenured driver. But the reality is that he’s chosen to remain with ThorSport for a reason.

“I’m not going to say I’ve had no desire to run Cup or Nationwide Series races; at the end of the day, that’s our goal. Most any driver’s goal is to go run Cup races and win races there, but I get paid to do what I love to do,” Crafton said. “Why could you ask for more? You could go race Cup on Sunday and get paid a lot more, but at the end of the day, I get paid to go race race trucks [and be competitive]. It’s the awesomest job in the world. I live comfortably and it’s awesome.”

This year, Crafton has a lone win, though it was a big one for him – Eldora Speedway. It was the race that qualified him for this year’s playoffs field, and this weekend, he’ll have a shot to make the Championship 4.

Only Sauter has locked himself into the final round of the championship battle, thanks to his victory at Texas last weekend, however Crafton finds himself in a relatively comfortable position heading into Phoenix. With a 24-point cushion over Ben Rhodes, who currently sits fifth in the standings, the driver of the No. 88 only needs to leave Phoenix with a solid run, rather than a win, and he’ll likely lock himself into the Championship 4.

With that said, Phoenix isn’t a guaranteed track Crafton will run well at. He has just six top fives and 11 top 10s in 16 starts at the one-mile oval. However, in recent years, he’s fared a bit better with three top fives in the last four races.

The bottom line, regardless of what happens to Crafton and the No. 88 team in the final two races this season, he’ll be back next season with ThorSport Racing, and a solid veteran is just what the series needs to continue challenging and educating the up-and-coming talent that continues to work their way through the ranks.