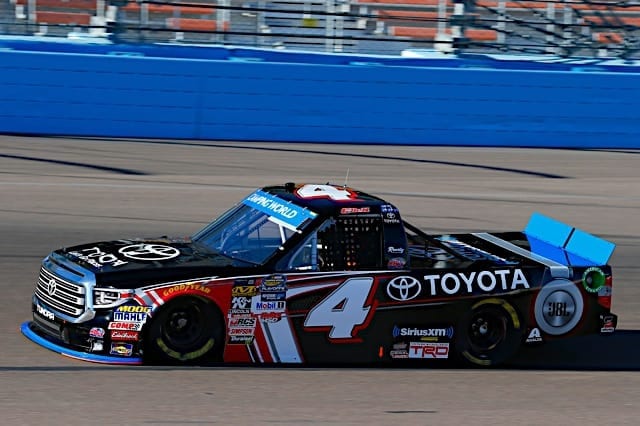 On Friday afternoon, Christopher Bell helped his playoff cause by claiming the pole for the Camping World Truck Series Lucas Oil 150 at Phoenix International Raceway.  Bell’s lap of 26.275 seconds (137.012 mph) in the final round was the fastest lap of the whole day.  In addition, Bell was quickest in all three rounds of qualifying.

Bell’s lap was over a quarter of a second faster than teammate Noah Gragson.  Ben Rhodes will start third, followed by Matt Crafton and Todd Gilliland.  John Hunter Nemechek will start sixth, followed by Brad Keselowski Racing teammates Austin Cindric and Chase Briscoe on row No. 4.  Grant Enfinger and Johnny Sauter round out the top 10.

Jesse Little was 22nd quickest in the first round of qualifying, but had contact on-track.  After not going back out in round No. 2, he will start 24th.  However, the team had to make some repairs to Little’s No. 97 Toyota.  As a result, Little will have to start from the rear of the field.

With 32 trucks entered, no one will fail to qualify.