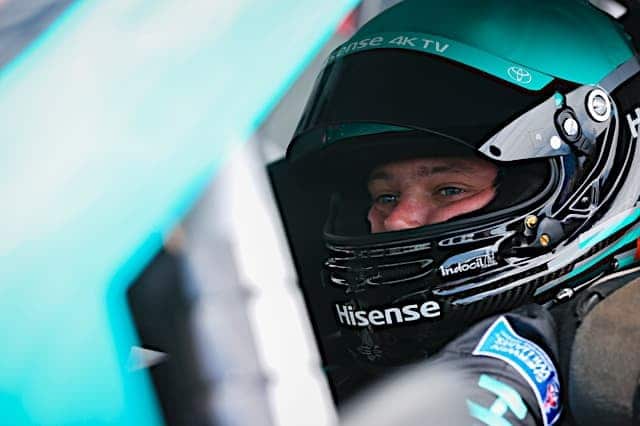 It wasn’t the victory like in Texas, but it was still a strong finish to the season for Erik Jones in the XFINITY Series. Saturday’s Ticket Galaxy 200 was still a strong showing for the No. 20 Hisense Toyota Camry, a form seen all season long with all the drivers who drove the No. 20. Jones’ third-place finish allows the No. 20 to stay in the owners’ playoffs. At Homestead, the No. 20 team will race against Gibbs’ No. 18, JR Motorsports’ No. 9 and Team Penske’s No. 22 for the 2017 XFINITY Series Owners’ Championship.

After the race, Jones explained how important clean air was on Saturday.

“[William Byron] getting clean air was obviously big for him,” Jones said. “I think if we had been in a similar spot, I think we could’ve held off [Ryan Blaney]. I think [Blaney had] the best car all day, [while] we were a second-place car. [Byron] made a good call, got up front, and got in clean air and was able to hold us all off. We made a mistake, slid through the pit box, I think we ended up similar to where we would’ve anyways but we just needed clean air.”

Jones’ fourth season racing in the XFINITY Series featured a series of strong runs. In 18 starts, Jones has three victories, including a season sweep at Texas. He also earned nine top five and 10 top 10 finishes. The XFINITY Series has been where names have been made and Jones can be one of the poster children of that slogan.

“I think the XFINITY Series has been good,” Jones continued. “I’ve enjoyed the time that I’ve ran over the year, I think we should have won a few more races along the way, but we did get a few over the year. It was a good season for us, it was really interesting to see the development of the car with the low downforce and try to help out JGR with that and hopefully help them out some next with whoever is going to be driving the car. It was fun, I enjoyed it.”

Clean air on a mile track that ain’t racing …thats follow the leader.
Cars are to aero dependent…open the grills