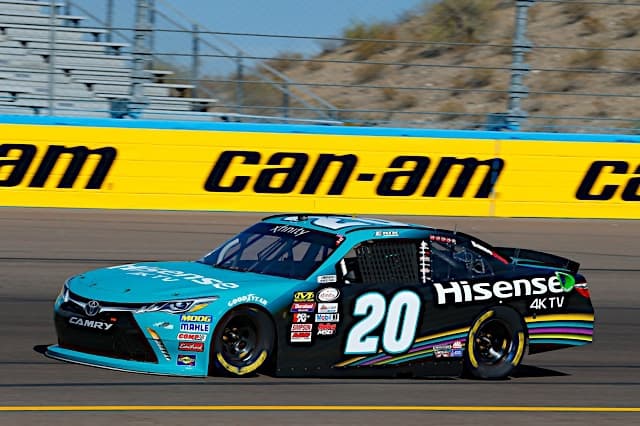 On Saturday afternoon, Joe Gibbs Racing’s Erik Jones won the pole for the Ticket Galaxy 200, the penultimate race of the 2017 XFINITY Series season.  In the third and final round, Jones turned in the fastest time of the weekend with a lap of 26.880 seconds (133.929 mph).

Jones’ lap was one-eighth of a second faster than William Byron, the quickest of the playoff contenders.  Cole Custer will start third, while Matt Tifft will start alongside.  Alex Bowman, driving the Chip Ganassi Racing No. 42, will start fifth.

Team Penske’s Ryan Blaney will start sixth, followed by Daniel Hemric and Christopher Bell.  Blake Koch and Justin Allgaier will round out the top 10.

Three of the playoff contenders failed to advance to the third round of qualifying.  Points leader Elliott Sadler will start 13th, while Brennan Poole will start 14th.  Ryan Reed, who has struggled to find pace all weekend, will start 20th.  As of right now, no one has locked themselves into the Championship 4 for Homestead.  Sadler has a 29 point advantage over Tifft, who is currently fifth in the points.

Since there are 40 cars in Phoenix this weekend, no one will fail to qualify.  Carl Long, who will start 40th in his own No. 13, did not post a time during the first round.

Bell, who will start eighth, was fastest in the first two rounds of qualifying.  To show how times dropped during the session, Bell’s chart-topping time in round No. 1 (27.285 seconds, 131.941 mph) would have just barely made the top 10 in round No. 2 and 10th in the final round (assuming that Bell’s actual time remained in play).

Coverage of the Ticket Galaxy 200 will begin with Countdown to Green at 3 p.m. EST on NBC.  The green flag should fall around 3:45.