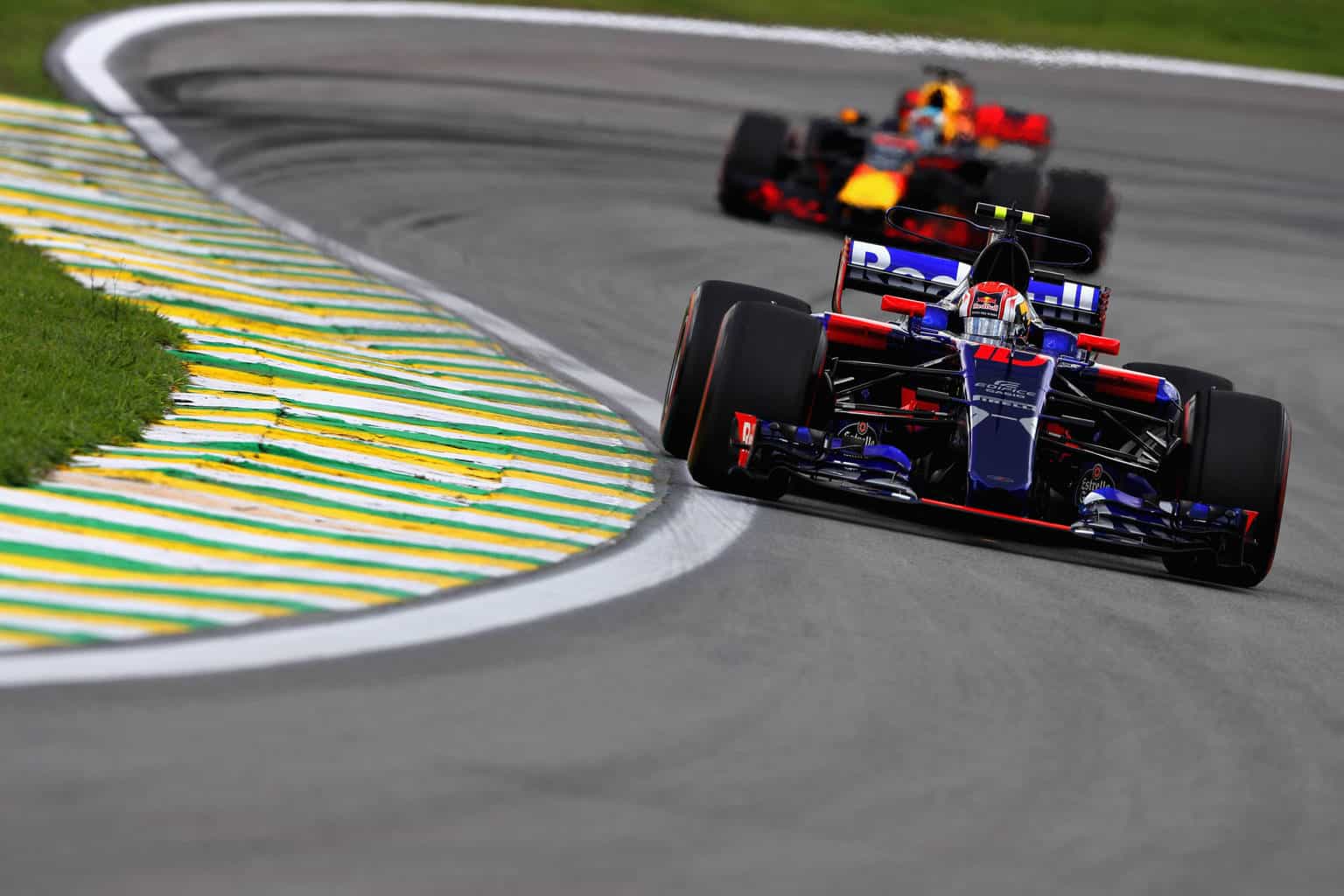 Pierre Gasly turning laps in his Toro Rosso at Interlagos ahead of the Brazilian GP (photo: Getty Images)

The final two races of the 2017 Formula 1 season is an interesting time.  With the championships settled, the racing this weekend comes with a different sense of drama in the fact that it’s just pure racing.  The points do not matter as they usually do – though the teams are still looking to gather as many as they can – but the pressure that accompanies much of the rest of the year is lessened, and it might be said that some may be able to race for fun.

Teams like Haas-F1 and Renault are still racing for their positions in the constructor’s standings and there’s a chance Valtteri Bottas could pip Sebastian Vettel for second in the driver’s table, so the points still matter.  Teams, however, that the end is nigh, and that means that these two races offer opportunities for testing things out, be it equipment, strategy, or drivers.

The notable team in that regard is Toro Rosso.  Often an afterthought to their parent team Red Bull, Toro Rosso is, and will be, undergoing a substantial amount of change.  They’ve already lost Carlos Sainz to Renault in a move that will see Toro Rosso using Honda engines next year.  Hence, the team is already preparing for that switch, while in the process of detonating every Renault engine they get – which actually seems to be the case as they suffered all sorts of failures at the Mexican GP and already endured issues at this weekend’s Brazilian GP.

The team is also in the process of settling their driver line-up for next year with Pierre Gasly and Brendon Hartley securing the rides.  The fact that neither driver started the season with the team means that the input, communication, personal inter-workings and team dynamic is being built on the fly.  That kind of turnover for a racing organization is immense and they are fortunate to be able to start getting to work on at least some of the aspects early.

In some ways, then, the Brazilian GP will be an intersection of storylines, with Mercedes cruising, Ferrari maintaining, a whole lot of the field scrapping, while teams like McLaren, Sauber, and Toro Rosso are riding things out.  Such a confluence actually should make for interesting racing.

– Usually when a company stops its sponsorship of anything involving F1, the story receives little attention.  To be more blunt: it’s not much of a big deal.  That companies jump from team to team in the sport is noted and part of how things run.  The news that Hugo Boss will be leaving F1 is, however, a story worth discussing.

The German clothing company has been involved in the sport for over thirty years, notably with McLaren and then Mercedes but they have announced that they will be moving in a different direction.  What makes the story significant is that they will move their sponsorship over to Formula E, feeling that it is a better fit.

Hugo Boss chief executive Mark Langer has stated that they see FE as “more innovative and sustainable” and that the sport is something the “younger audience likes,” his remarks given to the German Magazine Focus.

There are a few things to suss out from his quote, and it should be noted that the financial aspect did not, allegedly, play a part in the decision.  That FE may be more innovative and sustainable would portend that F1, by comparison, is in trouble, which is not really the case.

– Ferrari is at it again, threatening to quit the sport due to the prospect of a spending cap on the sport that they believe would lead to too much standardization of parts.  What the governing body is attempting to do is to close the gap between the teams with the monstrous bankrolls as compared to those with less monstrous budgets.

Part of the hope, from Liberty Media’s standpoint, is to have a better on-track product to sell, meaning that they want their to be more unpredictability with regard to the results.  More specifically, they would be happy to see teams like Force India or Sauber or Renault show themselves at the front, something that rarely happens currently.  In addition, Liberty would like to see the barriers of entry into the sport made less as to allow for outside competition.

Ferrari’s move is a tactic they have used frequently but often comes across as toothless.  What Ferrari see as a problem is that they spend a lot of money to earn their positions and that it is the fault of the other teams for not spending in the same kind of way.  The resolution to the matter will be one that takes some diplomacy but the likelihood of the prancing pony actually leaving the sport must be considered to be about nil but there still must be ways to assuage the concerns of all teams moving forward.

– it wouldn’t be an F1 race without some grid-spot penalties.  Thus far, all who have been penalized are powered by Renault engines, sort of.  The Toro Rosso duo of Hartley and Gasly will be set back ten spots while Red Bull’s Daniel Ricciardo, whose engine is actually branded Tag Heuer, will also be dropping back ten spots.  Look for the sport to examine how to mete out penalties regarding engine components over the offseason as there continues to be questions surrounding how it is handled under the current format.

The Brazilian GP is hosted at the Autodromo Jose Carlos Pace but most refer to it by its older name of Interlagos, for the neighborhood where it was built.  It was renamed in 1977 after Pace, a Brazilian F1 driver, died in a plane crash.  The track originally came to life beginning in 1938 and held the inaugural event in 1940.  The sport first visiting the track in 1972 but abandoned it due to the bumpy surface in 1980.  A refurbishing of the track began in the late 1980s, with the length being reduced from 4.9 to 2.7 miles in length.  It features 15 turns and the track enjoyed a full repave in 2007.  Felipe Massa and Sebastian Vettel lead active drivers with two wins at Interlagos, while Lewis Hamilton won last year in rainy conditions.

LibertIes goal of cost reduction and thus more competitive fields are well worth pursuing. What many are concerned about is whether they try to make it a spec series like Nascar. That would be unacceptable to many f answer and participants alike.

The last sentence should have read “That would be unacceptable to many both fans and participants alike.

Also the influx of manufacturers into Formula E seems to reflect where they see the marketplace as headed. I suppose the sponsors are beginning to see the same.