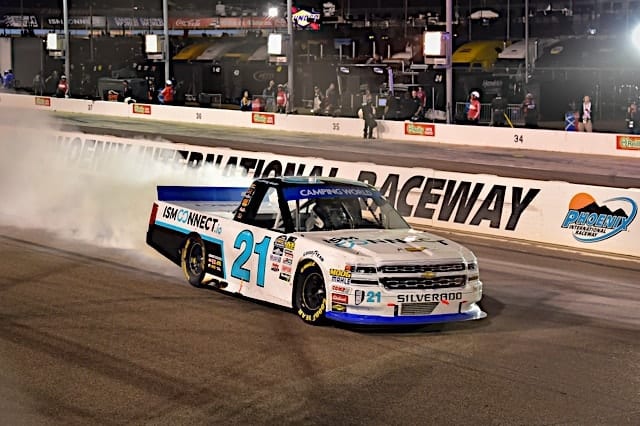 Two drivers battled it out in the end for the victory but, those two weren’t the ones everyone were expecting. After making contact with his teammate Noah Gragson, Christopher Bell lost the race he had absolutely dominated after he hit the wall. Bell’s pit stop meant that the race came down to Johnny Sauter and John Hunter Nemechek. On the final restart, following the third red-flag on the night, Sauter was able to clear Nemechek and drove away to take his second win in a row.

Friday night’s victory was far from easy for the Wisconsin native.

“We didn’t have the best truck,” Sauter stated in Victory Lane.  “We had a really good truck on long runs.  Obviously, the two [Kyle Busch Motorsports] trucks took care of each other.  I was really worried at the end with the red flags because it took a while for my [truck] to really get going, then I figured something out.  [Ron] Hornaday’s been wearing me out about not getting good enough restarts, so I’ve been working on it.”

Nemechek weaved his way through the late crashes to finish second. However, that was not enough to lock himself into the Championship 4. Cody Coughlin finished a career-best third, followed by Chase Briscoe and Kaz Grala.  Stewart Friesen finished sixth, followed by Todd Gilliland and a damaged Bell. Austin Cindric and Bayley Currey rounded out the top 10.

With Friday’s results, it will be Sauter, Bell, Cindric and Matt Crafton that will fight it out in Homestead for the 2017 NASCAR Camping World Truck Series championship.

Bell did everything he needed to do to lock himself into the Championship 4 in just the first stage of the race. He handily won the first stage and mathematically clinched his spot. The first two stages were rather calm, dominated by Bell but one-by-one, drivers were involved in crashes including fellow playoff drivers Crafton and Ben Rhodes. Even Bell would not be immune to being involved in crashes as he acquired significant damage on the final caution involving Gragson and Justin Haley.

“Even if my tires were up, there was no way I was going to be able to hang on. The thing was killed after I got into the wall,” said Bell following the Lucas Oil 150.

One of the biggest moments of the race involved Rhodes, Crafton and Austin Cindric. It all began after Josh Reaume brought out the caution 28 to go. Both Rhodes and Cindric decided to pit, Rhodes took on two tires while Cindric had a super-slow stop which put the two playoff contenders two positions apart.

Cindric got a great restart and went to pass Rhodes on the bottom. Rhodes attempted to block the move, and contact was made that sent Rhodes hard into the inside wall. Momentum then swept Rhodes back up the track in Turn 1, where he collected Crafton. Both drivers were eliminated from the race immediately. Luckily for Crafton, he had already locked himself into the Championship 4 by scoring points in each of the first two stages. For Rhodes, who had spent the whole race racing with Cindric for the final spot in the Championship 4, his postseason ended right then and there.

“[Cindric] was making a risky move with a lot of racing to go, the inside line wasn’t going the fastest, I could’ve made the same move but I chose not to because it wasn’t the right time.” said Rhodes. “When you do that here at Phoenix, it’s not very wide in turn 1, it’s a sharp turn. [Cindric] didn’t even have the position on me, he just barely had his nose looking. Regardless, he would’ve caused a wreck. I don’t think it was the right move, we’re going to move on to Homestead. I don’t really have a whole lot of words for him right now.”

Cautions breed cautions, and Friday night was a classic example of that. On the restart immediately after the Rhodes-Crafton crash, a flock of drivers tried to make it six-wide on the dogleg and it didn’t work. Dalton Sargeant rubbed against Friesen, sparking a crash that eliminated Sargeant, Jesse Little and Ryan Truex. The red flag that resulted from this crash lasted 14 minutes and 12 seconds.

The late crashes decimated the field in what had been a clean race prior to the final 30 laps. Only the top 10 finishers were on the lead lap at the checkered flag, while only 14 of the 32 starters finished.