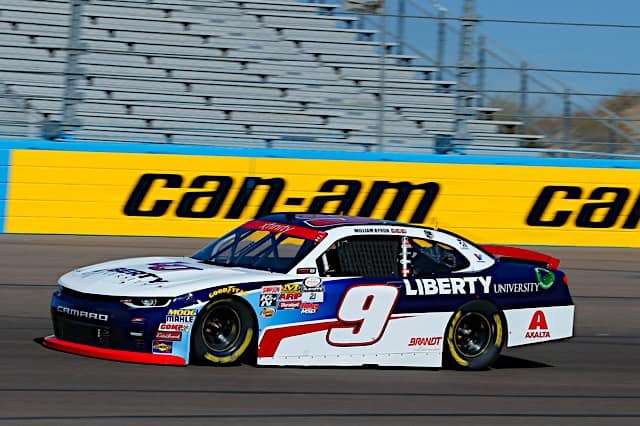 On Friday, XFINITY Series teams took to the one-mile Phoenix International Raceway for two practice sessions.  William Byron was fastest overall for the day with a lap of 27.343 seconds (131.661 mph).

In the early afternoon practice, Team Penske’s Ryan Blaney was fastest with a lap of 27.404 seconds (131.368 mph).  Blaney’s time was four-hundredths of a second faster than Justin Allgaier, the fastest of the playoff contenders.  Matt Tifft was third quickest, followed by Byron and Spencer Gallagher.

Christopher Bell was sixth fastest with Cole Custer and Erik Jones close behind.  Blake Koch was ninth and Austin Dillon rounded out the top 10.

Only four of the eight playoff contenders were able to post times in the top 10.  Daniel Hemric ended up 11th quickest in his Smokey Mountain Snuff Chevrolet, while Brennan Poole was 13th.  Elliott Sadler was 14th and Ryan Reed ended up 20th.

Bell and Caesar Bacarella tied for the most laps run in the session with 40. For Bacarella, the track time is crucial since he’s making his XFINITY Series debut on Saturday for BJ McLeod Motorsports in their No. 8 Chevrolet.  Bacarella was 34th fastest of the 37 drivers that posted times.  The drivers who did not post times were Harrison Rhodes, Morgan Shepherd and Gray Gaulding.

In the late afternoon practice, Byron was quickest with his day-topping lap of 27.343 seconds.  That lap was nearly one-eighth of a second faster than teammate Allgaier.  Bell was third fastest in the Safelite-sponsored No. 18, followed by Bowman.  Jones rounded out the top five.

Blaney was sixth quickest, while Custer was seventh.  Austin Dillon was eighth quickest in Richard Childress Racing’s No. 2 Chevrolet, while teammate Daniel Hemric was ninth.  Elliott Sadler was 10th quickest.

Three of the playoff contenders ended Happy Hour outside of the top 10 on speed.  They were Poole in 11th, Tifft in 14th and Reed in 21st.  The entire top 10 in the session was populated by playoff contenders and drivers ineligible to earn points.  The top non-playoff driver eligible to earn points was Casey Mears in 13th for Biagi-DenBeste Racing.

Once again, Bell turned in the most laps during the session, this time with 55.  Despite racing Friday night in the Camping World Truck Series Lucas Oil 150, Bell has never raced in the XFINITY Series at Phoenix.

39 drivers turned in times during Happy Hour.  The only driver that did not practice was Jeff Green in RSS Racing’s No. 38 Chevrolet.

Qualifying for the XFINITY Series Ticket Galaxy 200 is scheduled for 12:30 p.m. EST on Saturday afternoon.  The session will be aired live on NBCSN.