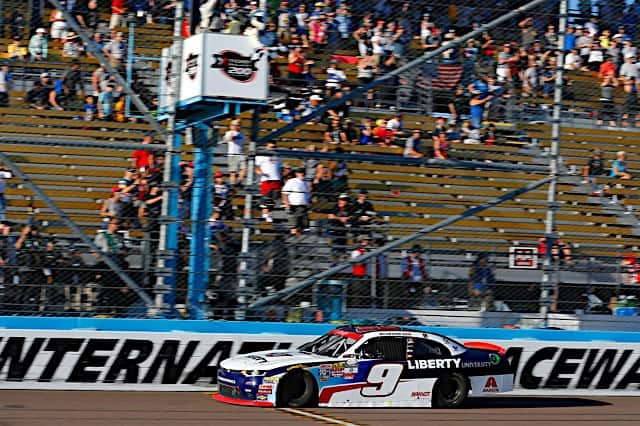 With 25 laps to go, it looked like William Byron wasn’t going to make it on fuel.  Shortly afterwards, Brendan Gaughan smacked the wall exiting turn 4 to bring out the yellow, which set up the final round of pit stops. Despite working with a somewhat makeshift pit crew, a two tire stop gave Byron the lead. With the clean air, Byron was able to sail off to his fourth victory of the season.

The normal crew that pits the No. 9 Chevrolet on Saturdays was stuck in Arkansas. All four crews for JR Motorsports were well over 1000 miles away due to a mechanical issue with their plane. As a result, the team had to scramble to find replacements. Throughout the whole wild situation, JR Motorsports didn’t phase one bit and it ultimately landed one of those teams in victory lane.

“The second to last run of the race it took off on the long run and we got to third and put the two tires on there,” Byron said in the Media Center at Phoenix International Raceway. “We were able to stay up there. I felt like clean air was pretty important, the 20, 22, and us were really similar and then whoever was in third would lose distance with the front two after 20-30 laps. We just had to adjust on it and and make sure we got it right on the last pit stop. The guys on the pit crew did a great job, to step in “cold turkey” like that, not knowing that you were going to do it this morning and showing up and pitting the car in the playoffs is pretty insane.”

Byron’s triumph came at the expense of Ryan Blaney, who dominated much of the afternoon. Blaney won the first two stages and led a race-high 147 laps. However, pit strategy resulted in a second-place finish. Pole sitter Erik Jones was third, while Christopher Bell and Daniel Hemric rounded out the top five.

The race for fifth between Hemric and Cole Custer was back and forth over the final 10 laps of the race. Both drivers battled battled all the way down to the wire. In the end, Hemric got a push from Blake Koch that ultimately sends Hemric to Homestead next weekend to battle with JR Motorsports teammates Byron, Elliott Sadler and Justin Allgaier.

Koch was able to beat Custer back to the line for sixth. For Koch, it is his best finish of 2017. Alex Bowman finished eighth, followed by Austin Dillon and Allgaier.

Speaking of playoffs, things picked up heavily in just the first 25 laps of the race. Brennan Poole went to go under the No. 8 of series debutante Caesar Bacarella (a lapped car) to try and gain a spot on Cole Custer and the ending wasn’t a good result. Bacarella appeared to turn down on Poole and contact was made. The contact cut Poole’s tire and sent the No. 48 into the outside wall. The team tried to fix the car and got back out with seconds remaining on the five minute clock. However, Poole blew the right front tire under yellow and pounded the outside wall again exiting turn 4. The contact ultimately ended their day and their championship hopes.

Afterwards, Poole was crushed while describing what happened.

“I saw [Bacarella] go into turn 1. We were going to go to the top to get around him, but he slid up the track,” Poole told NBC Sports’ Parker Kligerman outside of the Infield Care Center. “I tried to go underneath him and we made a little contact that cut the right front tire down. That sent us into the wall. Bad luck, bad circumstances there. I guess I could have been a little more cautious there, but I had to get up there, get some stage points and keep moving forward. Our car was actually pretty good. Just a bummer. I don’t know what to say. Sometimes, lapped cars are in your way. Gotta navigate around them and just couldn’t make that happen.”

Points-wise, Custer came up four points short of advancing to the Championship 4. He’ll go into Homestead fifth in points. Matt Tifft, who finished 11th, was another four points back. The handling went away in stage No. 2 and never came back. Ryan Reed struggled all weekend with his Lilly Diabetes Ford. While he finished on the lead lap in 14th, which was better than he ran all weekend, he could not post any gains.

Next Saturday, the 2017 XFINITY Series champion will be crowned. Allgaier, Byron, Hemric and Sadler will all have an even chance at the crown. The race will air on NBCSN starting at 3:30 p.m.

Well, that makes for a dull and uninteresting final with just Generous Motors being there. Now if we can today get Generous Motors locked out of the Cup final we will have the perfect sweep of final events that will have already pissed off 2/3’s of the potential audience in Xfinity and 1/3 of them in Cup. Those folks will likely go wash the car or cut the lawn instead of watching the two finals. What a stupid idea “playoffs” are in racing, and this is just another example of it.

Actually the stupid idea is for people to buy into the idea that the championship is so important, more so than the race itself. Other than bragging rights for a manufacturer or a team who cares? Nobody will remember two years from now unless they are reminded.

I find it interesting that there will be four Chevrolet drivers in the so-called final, and no Toyotas! I wonder if Brian has already had a meeting with officials from Toyota, because I’ll bet they’re not too happy with Brian right now!.