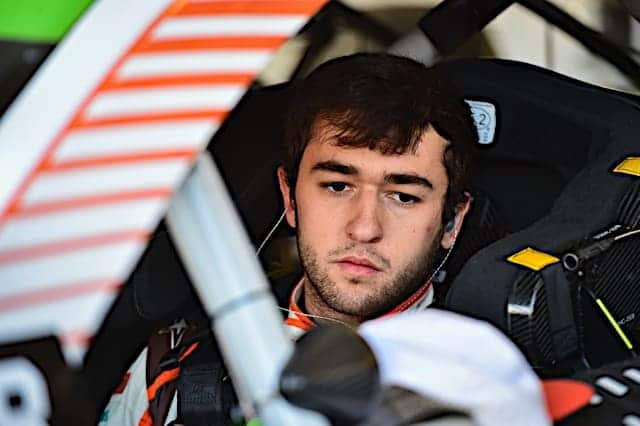 You couldn’t have wrote a better story for Sunday’s Can-Am 500 at Phoenix Raceway, but it wasn’t necessarily the ending that Chase Elliott wanted.

The race started out with Denny Hamlin showing his strong arm. Fittingly, Elliott wasn’t too far behind him most of the race. The points race was brewing as it would be mainly Brad Keselowski and Hamlin fighting it out for the coveted fourth position.

Elliott worked his way into the top three, where he confronted Hamlin once again. Both drivers battled hard for the spot. In the end, Elliott moved Hamlin out of the way and took the position. Exiting Turn 4, Hamlin slapped the outside wall. The contact ultimately caused the No. 11 car to blow a right front tire, ending his championship hopes.

“A wise man once told me that he’ll race guys how they race him with a smile on his face, so that’s what I did today,”  Elliott said in the Media Center. “I raced him how he raced me, and that’s the way I saw it. That’s about all I have to say.”

Without Hamlin in the picture, Elliott was able to go head-to-head with Matt Kenseth for the race victory. Elliott passed Kenseth on the final restart, but with less than 10 laps remaining the No. 20 car got by the sophomore driver, while Elliott held off Martin Truex Jr. for second, his seventh second-place finish of his career. Unfortunately for Elliott, finishing second just wasn’t good enough. Another win slipped away, but this time, a chance to race for the championship went with it.

“[We’ve] been so close to winning a handful of races the past couple years, and just like I told them after the race, at some point I’ve got to figure out how to close better, and I take responsibility for that.” Elliott continued. “I felt like I gave it my all today, and we’ll try to go to Homestead next week, finish the season as strong as we can and then get ready to come at them next year as hard as possible.”

For Elliott, the 2017 season has been a great year statistically.  Now, he’ll have to get the Hamlin incident in his rear-view mirror as the season wraps up next weekend at Homestead-Miami Speedway.

I was hoping, as the whole playoff is a farce, a gimmick galore, that he would be the guy to hoist the ONE RACE HOMESTEAD CUP! ! A perfect ending to show the demonic insanity of Brian’s “thinking” if he had won!