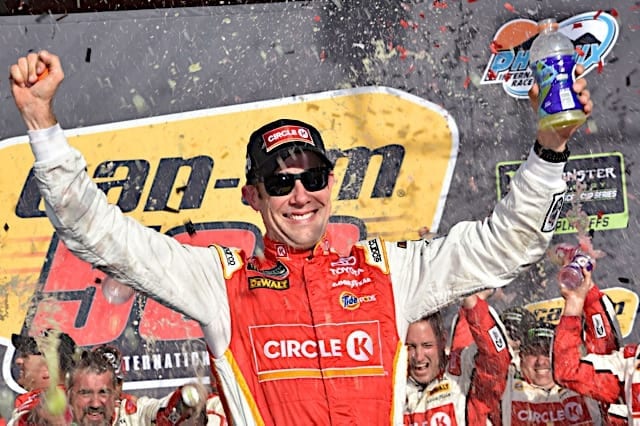 In a day of comers and goers, Matt Kenseth came when it counted Sunday at Phoenix International Raceway.

Taking the lead from Chase Elliott with nine laps to go in the Can-Am 500, Kenseth pulled away to score his first win of 2017. The victory, his 39th in the Monster Energy NASCAR Cup Series, was particularly special, as the 2003 champion has no plans to race in 2018.

“The way this year has gone, I really wasn’t expecting to win today,” Kenseth said. “This is a special one, it means a lot.”

Elliott finished second for the fifth time in 2017, coming up short of a win that would have secured a spot in next week’s Championship 4 at Homestead-Miami Speedway.

“That’s such a bummer, we were so close to having another shot next week,” Elliott said. “We gave ourselves a chance, our car was so fast on the short runs. I was just hanging on hoping I could get to traffic before we went away. Ill get it right someday.”

The most dramatic moment of the day involved Elliott, who was in a bumper-banging battle with Denny Hamlin in the top three late. And after a door slam into the wall from Elliott to Hamlin, the latter cut a tire and crashed out of the event after leading 193 laps.

The contact from Elliott was retaliation after getting spun by Hamlin from the lead two weeks ago at Martinsville Speedway.

For Hamlin, the dominator of the event was left with a 35th-place result, more than enough to end his shot at the Championship 4.

“We had a fast car all day,” Hamlin said. “We did our job all day long, put ourselves in position. ;Each person has their own opinion of how they do things. It proves to people who thought I was a bad guy, [Elliott] would’ve done the same thing in my spot. I’m in the garage, that’s the way it is.”

Hamlin was not the only one whose day ended by tire failure, as playoff driver Jimmie Johnson crashed out on lap 148, ending his chance at an

eighth Cup title. Trevor Bayne took a massive shunt after his No. 6 blew a tire and hit the Turn 4 wall on lap 226. He finished 38th.

Avoiding tire issues and much more, Brad Keselowski will race for his second championship next weekend, as he finished 16th after a struggling weekend for the No. 2 Ford.

“Sometimes you need a little luck on your side,” Keselowski admitted. “We tried to run the smartest race we could. It ended up paying off in the end.”

Next Sunday, the playoffs will come to a conclusion at Homestead-Miami Speedway. The Ford EcoBoost 400 is scheduled to go green at 3:15 p.m.

I wonder when he last time a non Chase or Playoff driver won during the final 10 races?

Probably Dale Jr at Phoenix in 2015

I’m not much of a Kenseth fan, but have to admit, that win of his was pure perfection! I do feel kind of bad for Chase, but his day for a win and a championship is surely coming sooner rather than later. Kudos to him for giving Hamlin exactly what he deserved …….. and allowing the 2 Crew to make the final round! Yay! Poetry in motion!