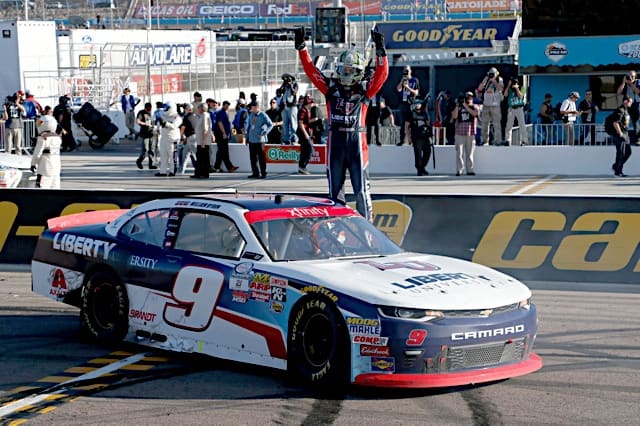 Monster Energy NASCAR Cup Series: Brad Keselowski Sneaks into Championship 4 – When they bumped, banged, passed and wrecked in the distance, the view became clear for Brad Keselowski: milk it home and you’re going to Homestead-Miami Speedway.

From the drop of the green flag in the Can-Am 500, a position in the Championship 4 was put more in doubt as his 19-point advantage entering Phoenix International Raceway was decimated by Denny Hamlin.

How? By stages, as Hamlin finished second and first in the two stages, advancing to even ground with Keselowski for the final run to the end. No point gaps, no room for hiding.

Despite the upgrade in pressure, Keselowski stayed planted in the seventh to 18th-place area. He only broke into the top 10 thanks pit strategy and falling back outside the top 15 after a stack-up on the race’s final restart.

But it all came back to him. Hamlin crashed out of the race after cutting a left front tire. Chase Elliott door-slammed the No. 11 car, causing a tire to go flat on Hamlin’s machine. Elliott went on to lose the race win after being passed by Matt Kenseth with 10 laps to go.

Matt Kenseth Soaks Up Return to Victory Lane in Phoenix

In the end, a 16th-place finish was all it took, along with some of that good, old-fashioned racing luck. – Zach Catanzareti

XFINITY Series: William Byron Grabs Momentum Heading into Championship 4 at Homestead- In a five-race mid-summer stretch spanning from Iowa Speedway to the Brickyard, William Byron was the hottest thing in NASCAR, posting three victories. On Saturday, he grabbed his fourth checkered flag of 2017, winning at Phoenix International Raceway, leading the final 17 laps.

Byron and his trio of JR Motorsports teammates had to overcome a morning scare that saw a ConSeaAir aircraft containing JRM pit crew members make an emergency landing in Arkansas. The crew members were unable to make it to Phoenix.

The replacement crew for Byron played a big role on the outcome of the race, as Byron and Daniel Hemric took two tires during the races final caution. While the No. 21 car faded to fifth, Byron got clean air and cruised to the victory.

Camping World Truck Series: Could Retaliation Factor in Title Race at Homestead? – Austin Cindric left Phoenix Raceway with a ninth-place finish and a pair of ThorSport Racing drivers angry at him.

With a strong run on a late-race restart, Cindric stuck the nose of the No. 19 Ford inside of Ben Rhodes, who blocked the move, triggering a melee that collected Rhodes and his teammate Matt Crafton. The incident ended the championship hopes for Rhodes, who was racing against Cindric for the fourth and final spot in the Championship 4 and also brought out the first of three red flags on the night.

After he emerged from the infield care center, Rhodes’ teammate, Crafton, didn’t mince his words.

Eddie Troconis, Rhodes’ crew chief, also mentioned retaliation when he was interviewed immediately following the wreck, but the trouble here is that you have a driver who’s been eliminated from the playoffs and also has a teammate remaining in the title hunt. Regardless of the circumstances, you can bet NASCAR will keep a close eye on Rhodes and Cindric if the two find themselves near each other on the track next Friday night at Homestead-Miami Speedway.

With that said, Homestead isn’t exactly a track where you exact revenge either. As one of the many mile-and-a-half tracks on the schedule, it’s one of the more dangerous venues for intentional contact or wrecking. Remember what NASCAR did when Kyle Busch retaliated against Ron Hornaday several years ago at Texas Motor Speedway?

The bottom line is that Cindric didn’t make any friends with the pair of ThorSport teammates, and if he could benefit in any way with help from Rhodes next weekend, you can bet the driver of the No. 27 Toyota will do everything he can not to assist Cindric in any way. – Beth Lunkenheimer

NHRA: Four Champions Crowned – The NHRA Mello Yello Series wrapped up the 2017 season with the Auto Club NHRA Finals from Pomona and crowned champions in all four professional classes during the weekend. Brittany Force took the crown in Top Fuel to be just the second female driver to win the Top Fuel world championship and the fourth female Mello Yello Series champion overall. (Shirley Muldowney, Top Fuel, Erica Enders, Pro Stock and Angelle Sampey, Pro Stock Motorcycle are the others.)

“I can’t believe we are here, it seems like a dream,” Force said. “The reason we are here is because of that Monster team and all the support I have and all the sponsors. Everyone at JFR and that is the reason we are here. We struggled, we had our ups and downs, but we pulled it together when it mattered most. I give all of it up to my crew chiefs, Alan Johnson and Brian Husen, they are the ones that made this possible. They always had my back and they kept pushing me that is what my Monster team did, they never gave up on me, pushing and fighting and never gave up.”

Fellow John Force Racing driver Robert Hight earned the Funny Car championship to make it a Nitro sweep for JFR. Bo Butner made the comeback in Pro Stock, getting around teammate Greg Anderson for the championship, making him the only regular season points leader to go on to the title. Eddie Krawiec wrapped up the Pro Stock Motorcycle title during qualifying.

As for the race, Force won the battle and the war as she beat Shawn Langdon with a 3.668 second, 330.07 pass while Langdon went up in smoke. It was Force’s fourth win of the season. She also beat Terry Haddock, Richie Crampton, and Antron Brown in earlier rounds.

“It has been a very emotional year, we’ve had a tough year with the loss of Terry Chandler,” Johnson said. “I wouldn’t be here if it wasn’t for her. She gave me the opportunity to drive after sitting out for five years. I was determined to get this win for Terry to close out the season. Just a great day. It wasn’t an easy win. The guys did a great job.”

Johnson also got by Bob Bode, Alexis DeJoria and Jack Beckman en route to the finals.

Butner was in a must win situation. Teammate Anderson came into the event with the points lead, but Butner knocked him out in the semifinals, putting himself in position to win the championship if he could beat rookie phenom Tanner Gray in the finals. Butner made a run of 6.554 seconds, 210.70 mph to best Gray’s 6.653 seconds at 208.62 mph.

Butner got by Shane Gray, Jeg Coughlin and Anderson before facing off against the younger Gray.

In Pro Stock Motorcycle, it came down to an all Vance & Hines Harley Davidson final as newly crowned champ Eddie Krawiec faced off against teammate Andrew Hines who was still looking for his first win of the season. Hines managed to secure that win, running 6.856 seconds at 196.02 mph to better Krawiec who ran 6.930 seconds at 177.58 mph.

Sports Cars: Pirelli World Challenge Returns to Portland – After a number of years out of the limelight in regards to major racing, Portland International Raceway will be back in major conversation.  WC Vision announced last week that Pirelli World Challenge will hold a standalone race weekend at PIR the weekend of July 13-15, 2018. It will be the first visit to the Oregon venue for the series since 2005. In 2005, the then-SPEED World Challenge supported the American Le Mans Series.

Unlike that 2005 race weekend, 2018 will see Pirelli World Challenge as the headliners. All of the classes will be on-site, resulting in a rather cramped paddock area.  As a standalone event, the primary races for the weekend will be the two Sprint-X races featuring the GT class as the top class.

The remainder of the 2018 Pirelli World Challenge schedule will be released at a later date.  Officials have taken care to prevent clashes with series such as the IMSA WeatherTech SportsCar Championship and the FIA World Endurance Championship so that drivers can run the full schedule. – Phil Allaway

Formula 1: Sebastian Vettel Snags Win for Ferrari in Brazil – The last time that a Ferrari earned the top spot of the podium at the Brazilian Grand Prix, Felipe Massa was behind the wheel, and it occurred in 2008. The Ferrari drought ended with Sebastian Vettel‘s solid win at Interlagos as he pipped Valtteri Bottas on the start and run into Turn 1. Bottas never mounted a serious charge and finished second, while the second Ferrari of Kimi Raikkonen held on to finish third.

Lewis Hamilton, who clinched his fourth championship at the Mexican GP, started the race from pit lane after crashing out of qualifying but won the Driver of the Day award with his run through the field, took fourth. The second and fourth place finishes for Mercedes may come as a bit of a salve for the armed robbery that team members suffered through after leaving the track on Friday.

The race began with what looked like a moving melee as Daniel Ricciardo, Esteban Ocon, Romain Grosjean, Kevin Magnussen, and Stoffel Vandoorne all seemed to bounce into someone over the first half of the first lap. The incidents put Magnussen, Vandoorne, and Ocon – who had never DNF’ed in his F1 career – out of the race. Joining them later, would be the Toro Rosso of Brendon Hartley who suffered another engine failure in what is a non-existent relationship with their supplier Renault at this point.

The final race of the season is the Abu Dhabi GP in two weeks, November 26. – Huston Ladner