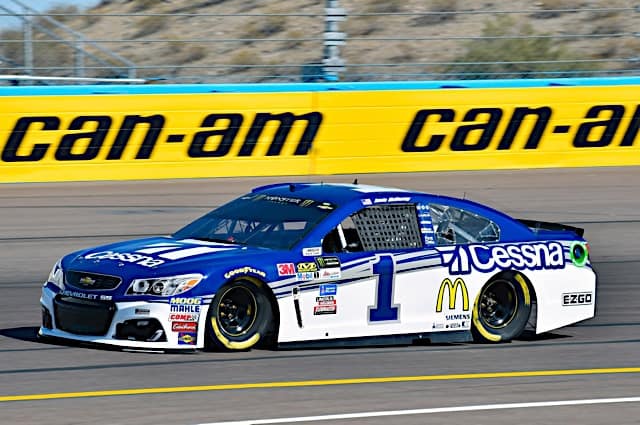 Jamie McMurray‘s roller coaster season hit another pinnacle on Sunday at Phoenix Raceway. A string of tough finishes over the past month led to his elimination from the playoffs at Kansas Speedway, three weeks ago.

However, Sunday saw McMurray run in the top 10 most of the afternoon, and just barely missed a top-five effort. A sixth-place finish is certainly a way to bounce back from two DNF’s. With just one race remaining in 2017, momentum can go one way or another for next season.

Even though Phoenix hasn’t been a strong track for McMurray in the past, he was able to tally his first top-10 finish since Charlotte Motor Speedway in October. It marks his fifth top-10 result at Phoenix.

Afterwards, McMurray was pleased with his performance.

“It was a good day, it’s hard to pass here, we had a solid car and we’re happy with how the sequence of pit strategy worked out,” McMurray said after the race. “We chose to put two tires on and I think that was the right call so that we could gain some track position.”

The good finish didn’t come easy. Earlier in the race, his teammate, Kyle Larson, blew an engine, ending his promising afternoon after winning the first stage. The potential of a similar issue did cross McMurray’s mind during the race.

“We blew up last week so I was absolutely concerned,” McMurray continued. “[Larson’s engine] was the third motor our team broke this year. That’s very rare in today’s world and to do two in a row there, that’s very scary.”

Three out of the last four races have seen one of Chip Ganassi Racing’s cars have an engine expire, something that should raise some concerns. Larson had his championship hopes dashed because of an engine failure at Kansas, and Phoenix was just his fourth career race in which he failed to finish due to an engine failure.