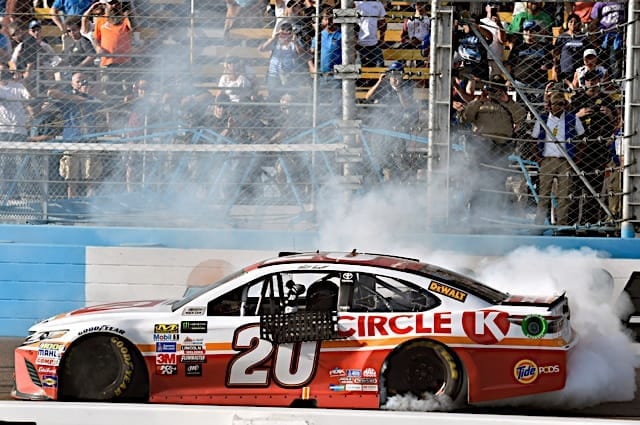 In a racing career that has spanned more than 20 years, Matt Kenseth has accrued his fair share of nicknames.

While racing on the short tracks of the Midwest as a teenager, he became known as “Matt the Brat” by defeating his older competition.  NASCAR fans dubbed him “The Robot” after watching several years of Kenseth’s unemotional victory celebrations.

Former series sponsor Nextel once poked fun at that moniker, creating a commercial where Kenseth malfunctioned after winning a race, prompting his crew members to retrieve another automaton from a truck full of Kenseth robots.  Other times, Kenseth has been the Stealthy Ninja, Stealth Bomber and Silent Assassin.  And of course, Kenseth has another nickname or two that cannot be printed here.

However, the most apt nickname for Kenseth might be “Matty Ice.”  In recent years, that name has been mostly associated with Atlanta Falcons quarterback Matt Ryan.  Yet back in 2003 and 2004, Kenseth infrequently ran a Smirnoff Ice-sponsored car for what was then known as Roush Racing.  Sponsorship and Ryan’s journey to the NFL gave birth to the nickname, but Kenseth’s driving ability has made it stick.

From Kenseth’s first race at Dover International Speedway to his win on Sunday at Phoenix International Raceway, his career has been full of moments that have left fans wondering how he managed to pull off the finish that he earned.  The only explanation?  Kenseth must have ice in his veins.

Early in his career, Kenseth had a knack for delivering victories in the clutch.  His very first win came in the 2000 Coca-Cola 600, holding off Bobby Labonte in the grueling final laps.  Several more wins and a championship later, Kenseth turned Bristol Motor Speedway into his stomping grounds.  Heading into the 2005 night race, Kenseth was 15th in points and needed to make up 104 points in three races to make the Chase.

Bristol dished out its usual helping of twisted sheet metal that evening, but Kenseth survived the chaos and rolled to his first victory of the season, leading 415 of 500 laps.  That win alone did not put Kenseth above the Chase cut line, but two more top 10s in the next two races did secure him a Chase spot after being 20th in points 10 races earlier.

The more Kenseth raced, the more races he won displaying an amazing ability to stay cool under pressure.  At Dover in 2011, Kenseth’s pit crew put him at the front of the field for a late restart.  Jimmie Johnson and Carl Edwards had been the most dominant drivers of the day, but Kenseth found a way to hold off them and everyone else.  Later that year at Charlotte Motor Speedway, Kenseth chased down Kyle Busch and made the decisive pass with 25 laps to go.

In the 2012 Daytona 500, Kenseth survived high engine temperatures, rain, a jet-dryer fire and several late restarts to win the Great American Race for a second time.  There is no doubt that those clutch performances helped to spur Joe Gibbs Racing to reach out to Kenseth when he faced an uncertain future with Roush Fenway Racing.

Kenseth made the move to JGR and enjoyed his winningest season in 2013.  While the No. 20 team had tons of speed, Kenseth had to fight hard for several of those victories.  He came out the winner in three late-races duels with Kasey Kahne.

At Las Vegas, Kansas, and Bristol, Kenseth found the No. 5 Chevy bearing down on him in the closing laps, but held on for the victory each time.  He chased down Busch to win the Southern 500 at Darlington, and held off a hard-charging No. 18 car at New Hampshire, securing his first wins at both of those tracks.  Kenseth ultimately lost the championship to Johnson that year, but not without making it known that he would be a title threat for years to come.

Despite being over 10 years removed from the Smirnoff sponsorship, Kenseth’s performance continued to reflect his claim to being Matty Ice.  He snapped a long winless streak following a rainy day at Bristol in 2015, holding off no less than Johnson and Jeff Gordon to take his fourth win in Thunder Valley.

A few months later at Pocono, Kenseth was half a lap behind the leaders and running on fumes in the closing stages.  Yet somehow, Kenseth made it to the finish line when everyone around him ran out of fuel.  Whether he was tracking Kevin Harvick at New Hampshire or furiously trying to hold off Kyle Larson at Dover, Kenseth’s great driving abilities and veteran savvy helped him reach victory lane in spectacular fashion.

However, the 2017 season proved to be a struggle for Kenseth.  He was able to fight his way into the playoffs one more time, even though an ambulance at Richmond Raceway nearly ended his postseason dreams.  The No. 20 team was decent through the first round of the playoffs, but a crash and major pit road mistake at Kansas took Kenseth out of the championship hunt for good.

Two weeks later, Kenseth announced that he was taking a hiatus from NASCAR in 2018.  His last season with JGR, and perhaps in NASCAR, looked like it would surely end on a down note.

But Sunday’s race at Phoenix was classic Kenseth.  He ran well most of the day, but did not have a car to match teammate Denny Hamlin.  Still, Kenseth stayed in contention, and snagged the lead by beating Hamlin off of pit road.  With Kenseth out front, the caution flags fell more frequently than they had earlier in the race, one the result of Hamlin blowing a tire and smacking the wall.

Following the last of those restarts, a fast and desperate Chase Elliott appeared to have dealt Kenseth the decisive blow.  Yet Matty Ice went to work one more time, closing the gap on Elliott and passing him back with 10 laps to go.  After a season of misery, Kenseth held on to claim the 39th victory of his career.

Kenseth has never been a flashy racer, which has probably contributed to his uncertain future.  Indeed, he has been overshadowed throughout his career by Johnson’s lofty numbers and Dale Earnhardt Jr.’s immense popularity.

If we are witnessing the end of Kenseth’s NASCAR career, we should appreciate the number of gritty performances he has put on, performances that reveal what a special talent he is.  Sunday’s race only adds to that legacy.  If only for one more time, Kenseth made a seemingly-impossible drive in the final laps of a race that few people ever expected him to win.

Matty Ice lived up to his name again.

It’s too bad that he didn’t let it be known sooner that he might be ‘stepping away’ in time for tracks and fans to show how much they appreciated his skill and dry wit. And we really don’t hold him responsible for this stupid playoff we are stuck with now. It wasn’t his fault he didn’t rack up 15 wins on the way to his title. We love him anyway.

Well nascar, you now have a driver that can win races but is not pretty enough, young enough and flashey enough.
What nascar will now get withose pretty, flashy drivers is so so racing except for a couple of top drivers. The rest of the field will be filled with drivers that have never won a race, driving top notch equipment. But they smile nice for interviews.

NO THANKS. STOPPED WATCHING NFL, DON’T MISS IT NOW WILL PROB. DO THE SAME FOR nascar.

Only been watching nascar for decades, the series doesn’t want me and I’ll go.