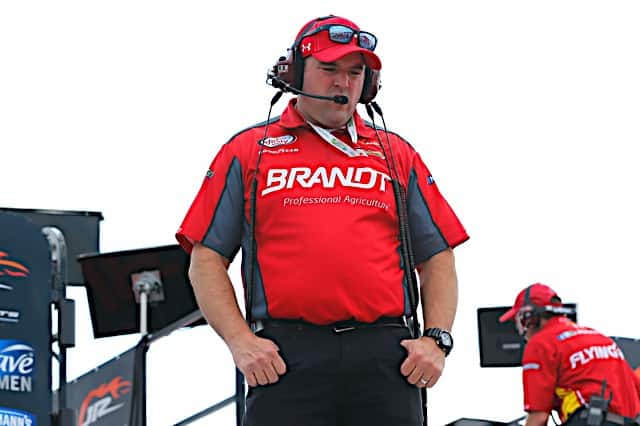 On Monday morning, NASCAR issued a special edition of the weekly penalty report to announce the suspension of Jason Burdett, crew chief for Justin Allgaier in the XFINITY Series.  After Saturday’s Ticket Galaxy 200 at Phoenix International Raceway, Allgaier’s No. 7 BRANDT Chevrolet was found with a unsealed rear brake cooling assembly.  This is a violation of Section 20.15.2.2 of the 2017 NASCAR XFINITY Series Rule Book, which states that rear brake cooling assemblies must be sealed from air inlet to exhaust.

As a result, Burdett has been suspended for Saturday’s Ford EcoBoost 300, the championship race for the XFINITY Series.  He has also been fined $10,000.  Allgaier has been docked 10 driver points, as has team owner Dale Earnhardt Jr.  As the sanctions are considered to be a P1-level penalty, Allgaier’s 10th-place finish from Saturday has been encumbered.  It cannot be used to break any ties.

Why is an unsealed rear brake cooling assembly such an issue that it would to the encumbering of a finish?  It is because such a setup could increase rear downforce on Allgaier’s Chevrolet.  That would be considered an unfair advantage.

NASCAR issued the penalty earlier than normal due to the No. 7 team being part of the XFINITY Series Championship 4.  There is no word as to whether JR Motorsports will appeal the ruling.  If they choose to do so, the team would be subject to an expedited appeal process.