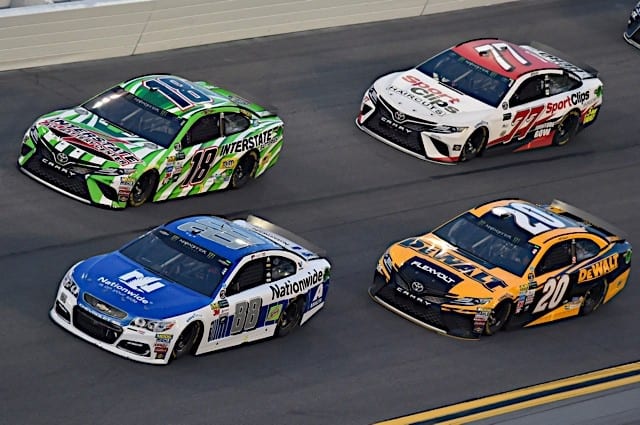 Did You Notice? … How quickly NASCAR has undergone a changing of the guard? Two more of the sport’s full-time drivers, Dale Earnhardt Jr. and Matt Kenseth, bid farewell to the sport this weekend at Homestead-Miami Speedway. They’ll be the cherries on top of what has been a mountainous shift towards NASCAR’s youth movement.

Here’s a look at how many full-time drivers have left the Cup Series since the start of the 2015 season.

* – Had already scaled back to part-time

The totals above are impressive: 282 victories, nine championships, nine Daytona 500s, and eight Brickyard 400s. That’s not counting the numerous Most Popular Driver awards Earnhardt won along with the millions in endorsements which faded the second Gordon and Stewart stepped off the track.

Of that group, six drivers were running full-time with top-tier programs. That means a whopping 25 percent of the sport’s best two dozen cars have gone through a retirement transition. It’s as if half the AFC suddenly had starting quarterbacks retire or LeBron James, Stephen Curry, James Harden, and Russell Westbrook all left the NBA at once.

It’s a brave new world ahead, one that’s younger and free from the shackles of NASCAR’s recent past. Of the 40 drivers projected to be on the grid next year, only one (Kurt Busch) raced in the 2001 Daytona 500 where Dale Earnhardt passed away. Just Busch, Jimmie Johnson, Jamie McMurray, Kevin Harvick, and Ryan Newman will have driven full-time during a Cup season without a playoff format.

Those five are the only ones left that remember what it’s like to race back to the caution flag. They’re the small group (plus Kasey Kahne) that raced Cup at the old Rockingham Speedway and ran twice a year at Darlington.

Suddenly, the NASCAR traditions people complain we left behind have truly become a relic of the past. In their place come a whole set of 20-something phenoms like Erik Jones, Chase Elliott, Ryan Blaney, and Darrell Wallace Jr. that will determine whether this sport lives or dies.

But it’s the departure of Earnhardt and Kenseth that truly closes the book on a generation. For Earnhardt, he’s inextricably linked to that tragic February day in 2001 where the Daytona 500 took the life of the Intimidator. Fighting through unimaginable sorrow, a whole legion of fans switched support from father to son. They cried together (Daytona that July), they celebrated together (2004 Daytona 500), and their driver singlehandedly held up NASCAR’s popularity during trying times.

Then there’s Kenseth, whose 2003 Cup championship many claim sparked the NASCAR playoff system. Winning the third race of that year (Las Vegas) his No. 17 Ford struggled to run up front soon thereafter. In the end, the Roush Fenway Racing driver earned just 11 top-five finishes out of 36 starts. He failed to even lead a single lap in the year’s last seven races. (Kenseth’s season total of 354 ranked 11th overall).

But in a year where top contenders piled up DNFs, Kenseth’s 25 top-10 finishes easily outdistanced Johnson and Earnhardt Jr. Newman, who had the best year of his career (eight wins) could do no better than sixth. As the season came to a close, the sport experienced a slight tick downward in ratings at the same time longtime sponsor Winston was leaving.

Worries about fading momentum had begun. A shrinking base of teams would lead to the advent of start-and-park teams to fill a 43-car grid the following season. But would the same pattern have happened if there was another competitive championship battle like Stewart and Mark Martin the year before?

We’ll never know. But the reality is that as soon as Kenseth put his championship trophy away, a new NASCAR chapter began. The Chase was born while sponsor NEXTEL marched into the picture.

It’s an era inextricably linked to this duo, longtime friends who came into the Cup Series together. On track, Earnhardt got the better of Kenseth coming up the ranks (winning two Busch Series titles) but lost out to his rival long-term. It was Kenseth who won their 2000 Rookie of the Year battle, utilizing consistency even though Earnhardt captured more victories (three to one).

As their careers continued, it was Kenseth racking up the championship and endless playoff appearances while Earnhardt dealt with the rollercoaster of family drama. But in some ways, their careers always seemed to be about even. Both dealt with bad luck and missed opportunities that cost them titles. It was Earnhardt, not Kenseth, who enjoyed more popularity, endorsements, and even got a bit of a retirement tour this year.

Kenseth simply got pushed out the door.

In their place will be a series that’s younger, faced with a challenge of breaking through a crowded national sports landscape. But despite growing up in the age of Facebook, the replacements will struggle to match the social media savvy of Earnhardt. None of these young men have quite mastered the wit of Kenseth at his best during a press conference, either.

Sure, Homestead-Miami Speedway will be about a championship this weekend. But it’ll also be about saying goodbye, cutting the strings, and NASCAR moving on to a bold new frontier.

and also heading out the door are the older, long-time fans and their money.

Exactly! those “traditions” Tom speaks of may be relics but with them and those retiring drivers also went the fun that I associated with NASCAR.

One could argue that already HAS happened.
NASCAR brass is in for a rude awaking in 2018 with attendance and ratings. People think the last 3+ years were bad just wait for 2018 when Earnhardt “Nation” has no reason to support NASCAR anymore.

Won’t be long before the generation hyped and marketed as “the young guns” in the early 2000s will be retiring. How time flies.

That’s why it is unwise and dangerous for a sanctioning body to keep messing with all aspects of a sport. Most fans want some feeling of continuity and there is nothing the same about the NASCAR I fell in love with in the 90’s with what we are being served today. That feeling must be magnified a hundredfold for fans that were around in the 70s. There is a reason customers like something, if you mess with it you risk taking away the things that kept the customers coming back. I still feel that is the biggest mistake NASCAR continues to make…. losing sight of the fact that fans are customers and not mindless sheep to be herded down the path they want. And that is why they continue to lose fans because they keep f-ing with it year after year.

One thing for the article, unless I missed something Kurt Busch is also still not signed on for 2018. Might be looking at no drivers from only 16 years ago still driving in Cup.

Ironically when 2018 starts the last active driver who competed against Dale Sr. for more than one race could be Derrike Cope if he gets some kind of ride. I think after this season the list of anyone who competed against him is Kurt Busch (2001) and Ryan Newman (2000) each for one race and Cope.

For all the doom and gloom, in terms of drivers the future is bright. Chase Elliott is quickly becoming a fan favorite like Jr. and his dad. Blaney, Jones, Wallace all have talent and personality. William Byron might be the next super prodigy. I miss Gordon on the track, but I really like this next generation coming up.

just a few rambles from me today

As an old fan from all the way from the 1970’s indeed so much has changed with automobile racing. For me, I don’t have much to say or even care how the sport continues to crown a champion. The old speedways a lot of them rotting and rusting away and others just once a year and maybe on their last racing grooves as well, how much longer will they be around?

Regardless, nothing lasts forever and eventually the old goes away to inevitably bring in the new. I believe the sport will be fine, we have great talent that will lead the way for many seasons to come.

It’s always exciting when we come down to the final race of the season and whom will be first at the finish line to bring it to conclusion! Then I have old man winter to deal with before the tides of Daytona Beach bring back the glory of Speedweeks!!

So. I am sad this is our last weekend and the last rides for Matt Kenseth, Dale Earnhardt JR and Danica Patrick. But yet a smile is still coming when in the months ahead we get to do it all over again and who will be the one who gets that checkered flag first!

I think a combination of an excellent live TV schedule and ticket prices have hurt attendance. People thought the WoO would decline after Kinser and Swindell retired, but it is stronger than ever now. NASCAR will go on without Gordon, Junior, Stewart and others.