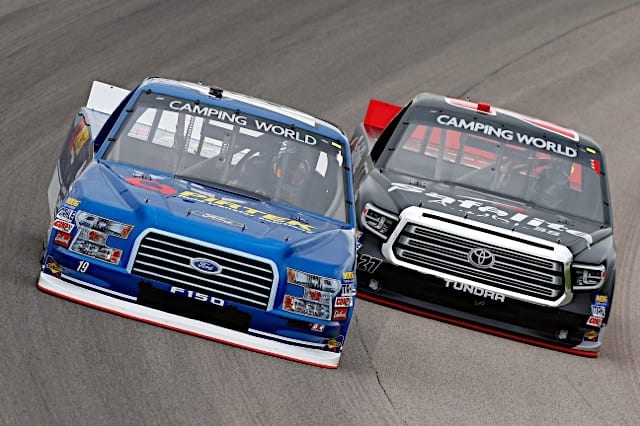 Austin Cindric will race for a championship in his rookie NASCAR Camping World Truck Series season Friday at Homestead-Miami Speedway.

But how he got here has raised questions on his chances to win it all.

Following a hard crash by playoff contender Ben Rhodes last weekend at Phoenix International Raceway — one that began off the front bumper of Cindric entering Turn 1 — the Brad Keselowski Racing driver yet again has found himself with a target on his back entering the Ford EcoBoost 200, the series’ season finale.

Rhodes, who was racing Cindric for the final spot in the Championship 4 before the crash, seemed level-headed after the accident. But things were still heated from the remainder of the No. 27 ThorSport Racing camp last Friday night.

“That was their chance to contend for a title, I can understand anyone being frustrated at that point,” Cindric said during Thursday’s Championship 4 media day. “The way they handled it probably wasn’t the cleanest, but you have to move on from that. They waited around our trailer to confront me after the race, threatened to crash me in Homestead. It’s blind frustration and you have to move on from it.”

The controversial accident wasn’t between two strangers. On the contrary, Cindric and Rhodes have cultivated a friendly relationship. Their racing past spans from Legend Car battles to week-to-week pre-race conversations.

“I always feel like every driver has a go-to driver to go sit next to during the introductions and Ben was my go-to person,” he said. “We’d sit there and talk with Justin Haley and those guys.

“We grew up racing in Legend Cars and Bandoleros. I’d hate to see him think the wrong thing. I’ve reached out to Ben, called, and it went straight to voicemail. Basically, made sure [to say], ‘Hey, there was no intent for anything to happen. It was just a racing deal.’ Watching his postrace interview, I think he understood that. I’d love to catch up with him over the weekend.”

Keeping one eye on Rhodes — at least during driver introductions — Cindric has all hands on deck for race day. That’s where he hopes to become only the second rookie to win a Truck Series championship since the series’ start in 1996.

“I can’t be concerned about any of it because I’ve got a lot bigger fish to fry right now,” he said. “I’m in the Championship 4. This is the biggest opportunity of my career. It’s frustrating because I wanted to race our way in, I didn’t want something like that to happen. It was a racing deal and I think everyone understands that.”

It’s also a big moment for BKR, approaching their final race in the series before closing its doors at year’s end. The 19-year-old relishes in the opportunity to bring team owner Brad Keselowski the big trophy to cap it off.

“To win the championship for BKR in their final race, final shot at the championship, Ford Championship Weekend. It would be huge,” he said. “It’d be a pretty big party in Statesville at the shop, a huge day.”

Cindric owns the worst average finish of the Championship 4 alongside Matt Crafton, Johnny Sauter, and Christopher Bell. But the teenager is confident of the team’s potential on the 1.5-mile track at Homestead.

“We’re more than capable,” he said. “We’re definitely the underdog and I love that. Who doesn’t love rooting for the underdog, right? BKR has brought great stuff to Homestead in the past, Tyler [Reddick] finished second there last year. We have the equipment to do it, it’s just about me figuring it out and getting the most out of it.”

With this being BKR’s final race, Cindric hopes to return to a schedule of various racing disciplines in 2018. At the moment, he has no full-time Truck Series plans entering Homestead.

“I’d love to continuing being as diverse as I have been,” he said. The teenager has raced everything from sports cars to rally. “That’s been my hallmark, something that makes me different than the young drivers I race against. To say I’ve raced and won in multiple different disciplines, and to be able to do that during a year, has been really cool.

“I committed myself to NASCAR this year. I left quite a few good opportunities in sports car racing to come to NASCAR. At my age, this is the time to go NASCAR racing. You have to ride that wave as long as you can.”

He crashed his way into the playoffs at Trois Riviers # which was blatantly unnecessary and while Ben Rhodes did throw a block (which was his right), Cindric would never have made turn one. He would have stuffed someone else. Typical rich kid, punk.