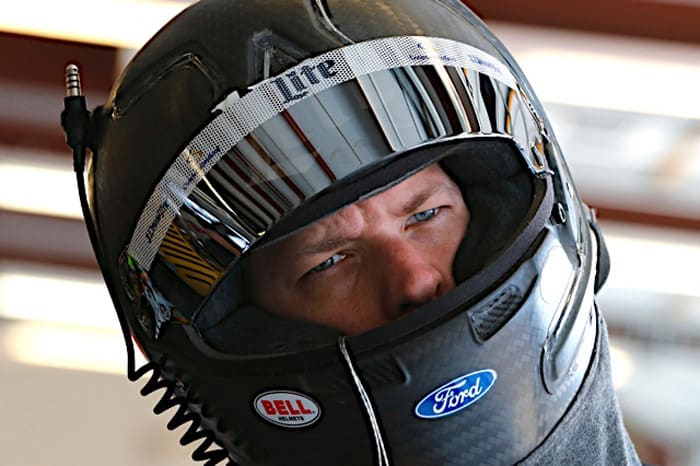 2017 is a trying year for Brad Keselowski and Team Penske. On Sunday, the 2012 Monster Energy NASCAR Cup Series champion has the opportunity to be the 16th driver in history to win multiple titles at the top level of auto racing.

Keselowski has three victories entering the championship race at Homestead-Miami Speedway, the last of which came at Talladega Superspeedway to advance him to the Round of 8. The No. 2 car saw the checkered flag at Atlanta Motor Speedway and Martinsville Speedway, both in the opening six races of the campaign.

At Las Vegas Motor Speedway, Keselowski was leading until something went amiss in his car with only two laps to go. Martin Truex Jr. went on to Victory Lane. Fast forward to the penultimate race of the season last week at Phoenix International Raceway and the No. 2 team squeezeed into the Championship 4 when Denny Hamlin blew a tire with 36 laps to go.

The No. 2 car crossed the finish line in 18th, and due to a pair of stage victories at Martinsville two weeks prior, Keselowski has a chance at a second title.

“If we look at the mid-part of the season and try to draw some conclusions, absolutely not,” Keselowski said at the Championship 4 media day. “If you looked at the start of the season, we won Atlanta and probably should have won Last Vegas – the first two mile-a-and-a-halves – you would say ‘Yeah definitely.’ Then, if you kind of rewound to Texas and Kansas, you could probably make an argument to say we were within range, definitely not able to dominate.

“I don’t know what we’re going to have this weekend. There is quite a bit of unknown for everyone and the racetrack will answer it for us piece-by-piece. Friday and Saturday, I’ll be able to give a much better answer.”

Keselowski referred to championship weekend has a game of poker, and each driver is playing their respective hand. The game becomes more clear throughout the weekend with a practice session on Friday, followed by qualifying. The final two practices of the year come on Saturday.

The decks might be stacked against Keselowski, as his mile-and-a-half performance in the playoffs have been up and down. In four races, he has two top 10s, with two more top 15s. But that won’t be enough to claim a second championship in Sunday’s Ford EcoBoost 400.

Keselowski feels the pressure, and believes he will validate his career by becoming a two-time Cup Series champion.

“It’s a huge opportunity to add to my team’s legacy,” Keselowski mentioned.  “There are a number of people who have been on my team since 2010; car chiefs, crew chiefs, mechanics, spotters, engineers, the list goes on.

“I look at that and can’t help but think winning one championship is really great, it’s a special thing to do.”

Adding another championship would start the Keselowski legacy.

“You don’t really have legacies until you have multiples, and that opportunity is in front of me right now,” Keselowski said. “I feel — in a lot of ways — that we were more competitive in the last three years than we have been this year and we didn’t make the final four. In some ways, it feels like there is a bit of divine intervention with the way things went last week to be where I’m at today.”

In nine career starts at Homestead, Keselowski has a pair of third-place finishes coming in 2014 and 2015. In order to add to his alluded legacy, he may have to win the race, as the first three champions under the current format have done.

The driver doesn’t take the opportunity to become a multiple-time champion lightly.

“It’s really a chance to make me a Hall of Fame driver,” he said. “That’s not something that anyone takes for granted. That opportunity is one race in front of me. I literally only have to beat three other people. It’s a little bit kind of hard to digest and comprehend for me with all the different circumstances that are in front of me.

“It’s one that I’m thrilled to be a part of. I think having four seasons since having the other one has been a chance for me to reflect on what the other one means. In a lot of ways winning the first one so early in my career was kind of like I was spoiled.”

Got get it Brad! I’m pulling for the 2 Crew!