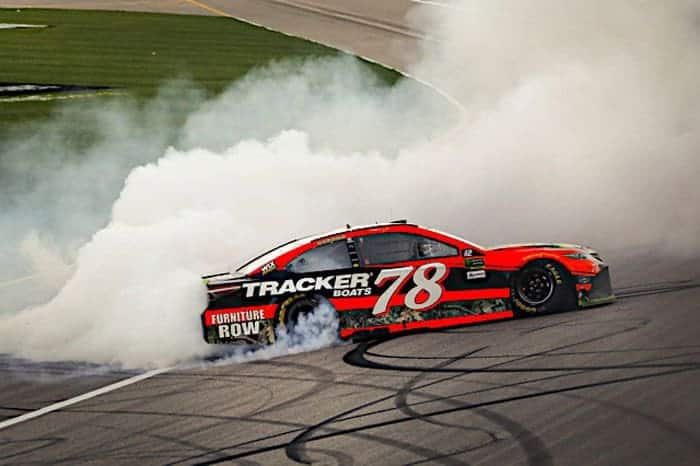 DraftKings’ daily fantasy NASCAR heads to Homestead-Miami Speedway this weekend for the Ford EcoBoost 400. This race also marks the final event of the season in the Monster Energy NASCAR Cup Series. The green flag flies Sunday afternoon at 3 p.m. ET on NBC and can also be heard on your local MRN affiliate.

Cars will hit the track on Friday at 12:30 p.m. ET for first practice and then at 6:15 p.m. for Coors Light Pole Qualifying.

This week’s fantasy forecast is brought to you by DraftKings, the No. 1 platform for Daily Fantasy Sports. You can jump in on all of the daily fantasy NASCAR action at Homestead this weekend by signing up at this link for a free entry into one of this weekend’s contests. All you have to do is make a $5 deposit to get started!

Truex is the odds-on favorite to capture the championship. Even Chevy rival Dale Earnhardt Jr. is rooting for the Furniture Row Racing driver as he seeks a first career title in over a decade of Cup competition.

. @DaleJr says he's team @MartinTruex_Jr for this weekend. "I'm great friends with @keselowski but I'm #teammartin for this weekend. We all know what @SherryPollex has dealt with and how dedicated he's been to her. Great guy, zero ego." #NASCAR #NASCARPlayoffs

Truex’s dominance at 1.5-mile tracks is unprecedented, with six of his seven wins coming on intermediates. Truex’s 2,175 laps led this season ranks first among Cup Series drivers and is 195 more than second place. Truex also has the best average finish (9.7), top-five results (18), and top-10 performances (25), more than any other driver in 2017.

In Miami, Truex ranks fourth among active drivers with more than one start in average finish (12.3). He also has seven top-10 finishes in 12 career starts.

All of these indicators make Truex the go-to play this weekend on DraftKings.

Busch took the checkered flag at Homestead in 2015 to capture his first career Cup championship. He has recorded four top-10 finishes in the last six races down in Miami.

Busch has also been fierce on intermediate tracks this season with laps led in seven straight races at 1.5-mile tracks. Leading 460 laps during that stretch, third best in the series, also has Busch at peak performance in the playoffs.

If anyone is going to take the title from Truex this weekend, it’s Busch. Make sure he’s part of your DraftKings lineup.

Keselowski enters this weekend as the underdog pick for the championship. His performance at Phoenix left much to be desired. But thanks to Chase Elliott and Denny Hamlin’s acrimonious relationship, Keselowski made the Championship 4.

The Team Penske driver has had a great run at Homestead over the past few races. He finished sixth in 2013 and then roped together back-to-back third places in 2014 and 2015. Last year, Keselowski was running in seventh when a wreck that changed the course of history occurred.

The 2012 series champion should also not be counted out this weekend. He runs well here and provides a salary cushion if picked over the more expensive drivers.

The 2014 series champion has an unbelievable Homestead streak right now. Harvick has finished inside the top 10 in nine straight races at the track dating back to 2008. He also finished third in 2016, sitting outside the Championship 4 competition but a formidable foe nonetheless. Harvick has the best average finish among all active drivers at Miami and has only finished outside the top 10 twice over the span of 16 starts.

Harvick is carrying a load of momentum into this race and remains on the radar as an underdog title pick. He also has three straight top-five finishes, including the win at Texas that locked him into the Championship 4. The team has found the speed necessary to outrun the two top Toyotas as Harvick seeks his second title in four years.

Elliott only has one start at Homestead and that came last season. He started fifth and finished 11th.

The sophomore driver remains winless, also eliminated from the NASCAR Playoffs in the Round of 8. But “The People’s Champion” has run his tail off throughout the course of the postseason. Elliott has finished second four times, including last weekend at Phoenix.

While coming up short with the Championship 4, Elliott has also led more laps over the span of the last three rounds than he did all season long. The No. 24 team is locked in right now and put themselves in position to have a successful season finale.

Hamlin has two wins at Homestead, but neither has clinched the elusive championship. Unfortunately, that will be the case if he were to win again this weekend. The Joe Gibbs Racing veteran was eliminated from the championship race after a cut tire ended his afternoon at Phoenix.

Hamlin has been phenomenal at 1.5-mile tracks this season with six straight top-five finishes. He also led laps in five of those races as the No. 11 Toyota proved formidable throughout the year.

As for this year’s NASCAR playoff, Hamlin also has five finishes of seventh or better in the last six races. Expect the No. 11 team to bounce back from its Phoenix flop and have a strong performance.

Bowyer has had a good deal of success at Homestead over his career. The Stewart-Haas Racing veteran has six top-10 finishes in 11 career starts despite leading just a single lap in Miami.

Bowyer even had a seven-race streak from 2008 to 2014 in which he didn’t have a finish worse than 12th. That also included a runner-up finish at Homestead in 2012.

This year has been Bowyer’s best statistical season since 2013. The move to SHR has been an obvious breath of fresh air for the 11-year veteran and he is looking to finish off the year strong.

McMurray is on pace to finish 12th in the Cup Series point standings. If that holds, it would be his best performance since 2005. His average race finishing position of 14.7 and 17 top 10s are the best numbers since the early years of his career.

McMurray has been the model of consistency in 2017, a pattern that should also continue in the season finale. Two of the driver’s three career top-five finishes at Homestead have come within the last three seasons. Running fifth in both 2014 and 2016, expect McMurray to finish between there and his career average of 15.6. 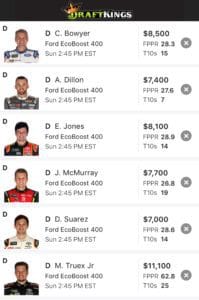