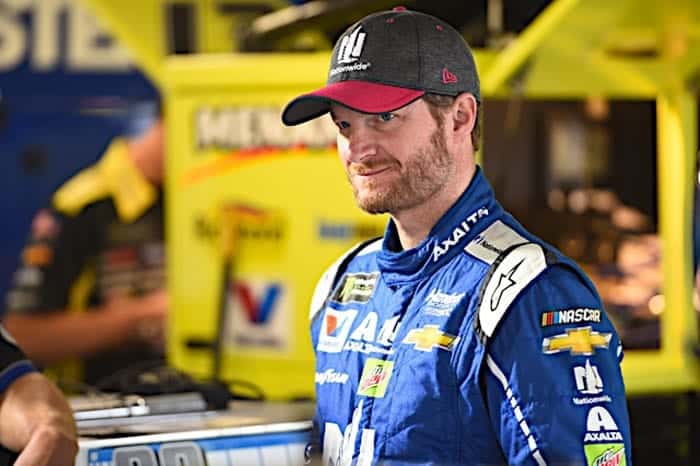 There are a number of storylines that emerged from the Cup race at Phoenix – pardon me, the Monster Energy NASCAR Cup Series race at Phoenix.  The one that seemed to garner the most attention, rather than Matt Kenseth’s win, looked to be the on-track equivalent of a slap-fight between Chase Elliott and Denny Hamlin.

That the crowd raved when Hamlin blew a tire and saw his title hopes again fade away, came as a bit of a surprise – not because of the rivalry but because Hamlin had ample time to hit the pits and grab some fresh tires.  Of course, then his season would have been over anyway.  Maybe if he would have just let Elliott go but that argument has already been going on….

The storyline to focus on here is Jimmie Johnson’s washout.  Is anyone else surprised at just how off the team has been during this 2017 Chase, er playoffs?  That the seven-time champion washed into the wall before the halfway mark of the race is staggering even if the team has been struggling this year.  Consider that he has four wins at Phoenix while also having the most top-five finishes, with 14.  He may not have won at the track since 2009 but that hasn’t hindered his ability to win championships since.

To see the No. 48 struggle as they have this season is an interesting question mark.  Is Hendrick Motorsports that slow, and if so, how come Elliott seems to have speed?  If the 48 team is so off, how did they still make it to the penultimate race of the season with a chance to race for the title?  Has the bar been set to a standard that is difficult to recognize as the team still won three races and had a season that most would be happy to put on their resume?  It’s a weird mixture, to say the least.

The undertone of Johnson’s interview after departing the race seemed to give a sense of relief like he and Chad Knaus will be taking some time off and devising a new plan for next year.  As Knaus has become Bill Belichick to Johnson’s Tom Brady, it’s likely the two will come up with something.  The question for next year then will be whether or not Johnson can shine once again or if retirement isn’t too far off for him.

Happiness Is… Kenseth.  Matt Kenseth did a very Matt Kensethy thing last week at Phoenix by going out and winning the race.  First, it should be noted that his win was an emotional one and that if he really does wind up doing something next year rather than driving a Cup car that he will have gone out with a bit of style.  To acknowledge his unabashed joy at the win is to recognize something human that exists inside all of us.

From a racing perspective, Kenseth was a perfect muck-raker.  By winning, he changed the narrative of the Phoenix race to one where the points standings became the crucial element.  Hence, Brad Keselowski can go ahead and send Kenseth a happy holiday card or something.  When Kenseth passed Elliott, it kind of changed the tenor of the race, from one where winning meant everything – as the playoffs have often been sold – to an event where the drama felt slightly removed.  And who would do that better than anyone but the robot himself?

What Kenseth also did is to showcase one of the glaring imperfections about the whole playoff thing in the sport: that the other drivers on the track are not to be forgotten.  Kenseth stole the headline.  As playoff drivers had taken the first eight races, this result looks like an upset, and a bit one at that.  That Kenseth is still one of the better drivers in the garage could not be ignored, nor his storyline of impending ‘whatever he’s doing next year that isn’t Cup racing’. Kenseth brought a new level of trolling to the sport and for that, he should be appreciated.

Happiness Is… Tears.  Budweiser makes beer.  Most people are aware of their product and some even seem to like it.  When Dale Earnhardt Jr. began his career in the Cup series, his union with Budweiser was like a marketer’s wet dream.  Coupling the youthful, transcendent, good-looking, up-and-comer with the brand must have sold a lot of beer – and it looked like a partnership meant to last in perpetuity.

The story lasted only eight years, however.  What looked like a relationship meant to last became a signifier of the sport; meaning that as his partnership with Budweiser went awry, due to a number of factors, it foretold a mass exodus of other companies from the sport as well as the fleeting dominance of some teams.  (Remember when Roush was just Roush and used to compete for race wins on nearly every weekend?  How can you – it was so long ago!)

Budweiser is sm nd recognizes an opportunity to cash in one last time on Earnhardt.  Wait, wrong social commentary and criticism.

Budweiser is smart and produced a wonderful send-off to their former driver, giving glimpses of his time with the team while also giving thanks to a relationship that once was.

It is meant to pull at the proverbial heartstrings.  For fans of the sport, regardless of their team/driver affiliation, such a video is a friendly and welcome reminder of why we often care.  Aloha, Jr.

Happiness Is…Championships.  While much of the focus will be on the Cup series and the title race on Sunday, this weekend is one of the few that NASCAR gets right.  All three championships will be determined over the weekend, with the Trucks on Friday, XFINITY on Saturday, and then the big show on Sunday.  Even if you have not paid attention or cared about the other series this season, these final races are the last of NASCAR racing until Speedweeks.  It’s easy to be critical, but for now, let’s enjoy.

Kenseth not racing next year in a quality car is a travesty. nascar can go pack sand. I’m not the only senior that
has those feelings. Ratings in the tank this year, they will be under the tank next year. Just watch. I won’t.