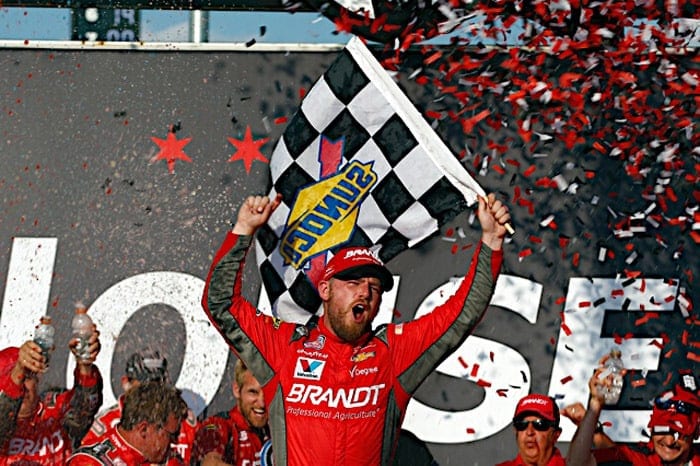 Justin Allgaier heads to Homestead-Miami Speedway with an opportunity to capture his first NASCAR championship. It’s the second straight year he’s had the chance.

But while 2016 ended in disappointment, 2017 has a much different feel for the JR Motorsports veteran.

2017 has been much different than 2016 for the veteran driver. Allgaier recorded his first victory in five seasons in March at Phoenix International Raceway. The No. 7 car paced the field for 85 circuits and beat a plethora of Cup Series regulars.

Allgaier went on to lead a career-high 157 circuits at Richmond Raceway before finishing a disappointing runner-up. Over the course of the season, Allgaier has paced the field for 495 laps, which is more than his three fellow title contenders (William Byron, Elliott Sadler, and Daniel Hemric) combined.

It took the No. 7 team all the way until Chicagoland Speedway, the last race of the regular season, to capture another checkered flag. But Allgaier has remained one of the series’ most consistent drivers for a team, in JRM, that landed three of the Championship 4 contenders.

You could see why, in his seventh full-time XFINITY season, Allgaier feels so great about his title chances. This season’s success makes anything less than the championship trophy a big disappointment.

“There are three of us that are going to think [we’ll win the title] and one that’s going to be super excited,” Allgaier said of the JRM trio. “I feel like personally I’m in the best place. Racecars wise, I feel like we’ve had an amazing season with guys doing what they needed to do and things working the way they needed to work.”

Allgaier admitted that his victory at Chicago was special to him. It was the first race he was victorious in which his daughter Harper was in attendance.

“I was able to get my daughter to Victory Lane for the first time this year,” Allgaier said. “That was a surreal moment for me. If I can stand there and hoist that championship trophy and she can be there standing right next to me, that’s a lot of motivation.”

On the final restart of the 2016 championship race, Cole Whitt stayed out on old tires to restart with two laps to go. Both Erik Jones and Allgaier restarted on the outside, behind the No. 14 car, which put them at a disadvantage.

The Nos. 7 and 20 cars were then involved in a stack-up. The wreck lost them valuable track time and took away any shot at the championship.

At the time, Allgaier was frustrated. But after reminiscing, he believes that was a turning point.

“That final three or five laps has been the best thing that’s ever happened to me in my racing career,” Allgaier said. “I think a lot of times we get caught up in this sport that we can control situations that we really can’t control. I look at 2017 as we have done everything we can do up to this point. We’ve had the best racecars I’ve ever had.

“At the end of the day, no matter what happens on Saturday night, I know that we have the best product on the racetrack and we’re in the best position that we can be. If it doesn’t work, it’s not because we weren’t in the right spot, or we didn’t do things right and because circumstances are out of our control. That’s taken so much pressure off of me this year. I feel like last year I came into this race and I was stressed out to the max and worried about controlling my own destiny, when in reality, I’m looking at it as the plan is already written.”

Allgaier did say that it took him roughly one week to get over the finish of last year’s championship. He mentioned he would have been content to be locked away in a dark room.

Now, he hopes to see the light of a title at Homestead. In seven career XFINITY starts at the track, Allgaier has one top-10 finish, coming last season. He’s earned an average finish of 15.4.