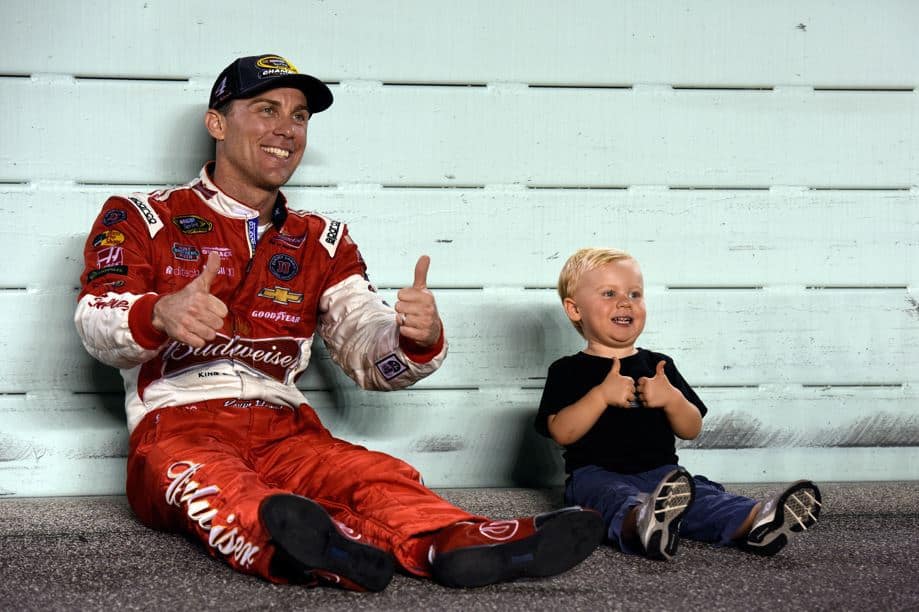 A late pass, 190-mph speeds and a wicked burnout capping off 400 miles of some of the hardest driving of his career back in 2014. It all doesn’t compare to the little things for Kevin Harvick.

As the Monster Energy NASCAR Cup Series embarks on its final race of 2017 at Homestead-Miami Speedway, all eyes are on the Championship 4 of Harvick, Martin Truex Jr., Kyle Busch and Brad Keselowski. These men will compete heads-up for the championship in what is usually among the most memorable and stressful events of the calendar.

It’s just how it should be, but is it all drivers focus on toward raceday?

While a young driver may have his eyes secure on the big, bad Monster Energy Cup trophy, the fat paycheck or the everlasting moniker of “Cup Series champ,” 41-year-old Harvick has felt the feeling before and relishes in one moment above the rest: spending the celebration with son Keelan

“My favorite moment from winning the championship was when [Keelan] and I were sitting up against the wall,” Harvick said. “He could care less about what happened. He thought it was cool that there were rocks and rubber up against the wall and he could throw them down the banking. That was really all he cared about.”

That came post-race after winning his first Cup title when Harvick, in his 14th attempt at the crown, also posed with wife DeLana and then-two-year-old son Keelan trackside with the championship hardware.

Enjoying the fun moment, the Harvicks recently asked Keelan if he remembered anything from the championship night. Unfortunately, without the help of photographic evidence, Harvick doesn’t believe he does.

“We asked him that this morning and I don’t think he remembers,” he said. “The only thing he remembers… he says he remembers taking a picture sitting on the ground with the trophy. I think he only remembers that because it hangs in my closet.”

Now five years old, Keelan has taken a few trips to Victory Lane with the driver of the No. 4 Stewart-Haas Racing Ford since, recently helping his race-winning daddy with postrace interview at Texas Motor Speedway.

Keelan Harvick is just too cute.
He's excited now, but imagine his excitement if @KevinHarvick wins at @HomesteadMiami pic.twitter.com/aUD7uAiaDO

“Even if it’s just winning a race, to have him around and have all that time out,” Harvick said. “To have him in Victory Lane and those memories, very cool.

“But that picture of us giving the thumbs up winning the championship is one of the coolest things that you’ll probably ever get a picture of.”

“It’s little things like that can mean a lot and go a long way,” he said. “It’s something that would obviously be very special.”