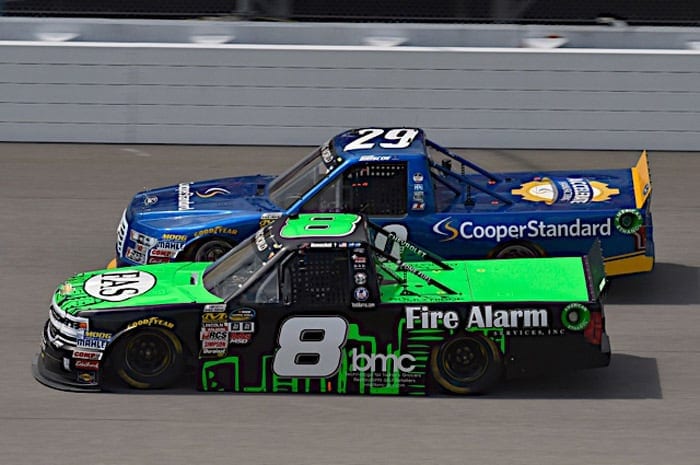 This weekend, all eyes will be on the championship battle at Homestead-Miami Speedway as Christopher Bell, Johnny Sauter, Matt Crafton and Austin Cindric will duke it out for the 2017 title in a single-race, winner-takes-all fight. While the majority of the focus will be on those four drivers, there are several others who would greatly benefit from a strong showing this weekend.

After a valiant battle to make the Round of 6 with a sixth-place finish in a severely damaged truck at Talladega, Nemechek had a dismal couple of races that put him into a must-win situation in Phoenix last weekend.

First, it was his crash early at Martinsville that ended in a 30th-place result, and then the 19th-place finish at Texas following a fuel gamble set up a major point deficit the driver of the No. 8 Chevrolet needed to overcome. Phoenix brought a much stronger truck and a bit of good fortune, however, a runner-up finish was still just one position shy of the race win needed to lock Nemechek into the Championship 4.

Heading into Homestead this weekend, it’s a very real possibility that it could be the final race for NEMCO Motorsports. The team, which has been around for a number of years, has been start-and-parking a second truck just to help cover the bills to keep Nemechek racing. And with the ever-increasing cost of fielding a truck, it’s going to take a strong run to really turn heads that may help bring financial support to the single-truck team.

While his teammate Cindric has a one-race shot at getting the championship for Brad Keselowski Racing before it shutters its doors at the end of 2017, Briscoe has already been eliminated from the title race. With that said, he doesn’t currently have a ride for 2018.

In mid-August, shortly after BKR owner Brad Keselowski announced his team will shut down at the conclusion of this season, Motorsport.com reported Ford Performance would like to see the current driver of the No. 29 Ford move to the XFINITY Series next season.

“Chase has done a great job in the BKR trucks in 2017 and we are fully committed to his continued development and progression in NASCAR,” Ford Performance global director Dave Pericak said in a statement.

“We have already been active in working with our Ford teams to place him into the right Xfinity program for 2018, but right now we want his focus to be on winning races and competing in the playoffs for a championship in the Camping World Truck Series.”

The most obvious options for Briscoe in the XFINITY Series would be with Roush Fenway Racing or Stewart-Haas Racing, but again, there’s that pesky detail about needing sponsorship. Briscoe has come tantalizingly close to winning his first career race, but has not yet closed the deal. A trip to Victory Lane this weekend would be a double-bonus for him as it could bring a closer look at the rookie while allowing BKR to come out on top.

While I wouldn’t say he needs a strong run this weekend to close out the season well, especially given the strides Truex has made this year, he could really benefit from a trip to Victory Lane. After being sidelined last season, he entered this year fully funded and ready to race for a championship. He narrowly missed the Round of 8 in a tiebreaker, but perhaps what’s more important is the improvement his single-truck team at Hattori Racing Enterprises has shown this year.

It was a rough start to the year when the No. 6 team was crashed out of the season-opener at Daytona on the first lap, but following an extended break between Martinsville and Kansas earlier in the season, a fleet of rebuilt trucks turned Truex’s season around. Beginning with a sixth-place finish at Kansas, he went on a run of five straight top 10s before a trio of 20th or worse results

The strides HRE made this season should make anyone associated with the team hopeful of what the future could bring. But they must first tie down enough financial support to bring Truex back next season. On the cusp of something great, the single-truck team would love nothing more than to close out their year with checkered flag and momentum heading into the offseason with an even better way to sell their schedule.