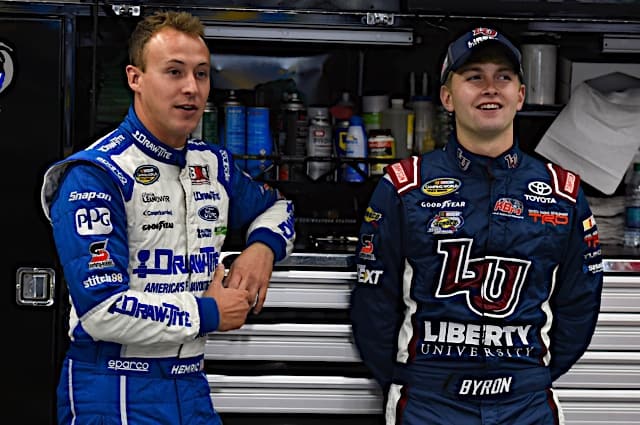 For William Byron, he couldn’t have handpicked his three competitors for the NASCAR XFINITY Series championship any better. Two are teammates and one is a longtime competitor/friend.

For Saturday’s Ford EcoBoost 300 from Homestead-Miami Speedway, JR Motorsports rookie Byron will have teammates Elliott Sadler and Justin Allgaier alongside in the Championship 4. Former Legend Car competitor Daniel Hemric will complete the group.

With four victories on the season — the same as the rest of the full-time series regulars in 2017 — Byron has had confidence in XFINITY racecars for months. However, the confidence from his championship rivals this weekend has grown for years, especially with Hemric.

“It’s a cool feeling to know how we started at the local short track,” Byron said of Hemric in Legend Cars. “All the kids who are in that environment trying to make it to this point. To see the two of us be able to make it is really awesome.”

Though Hemric, who hails from Richard Childress Racing, is Byron’s only non-teammate in this fight, there is no concern of rough racing at any point come Saturday’s finale.

Byron remembers one moment in Legend Cars, in particular, that secured that confidence.

“I remember the one time [Hemric and I] got tangled up, we both felt bad about it and we talked it out and moved on,” he said. “That set the bar for how we were going to race each other down the road. He’s taught me a lot in my career as far as driving late models for him.

So in a way, Byron finds himself racing for the XFINITY title amongst friends. However, despite those solid relationships the teenager is still racing for himself and the No. 9 team.

“You’re out there for yourself,” he said. “You’re trying to win for your team. You want your other guy to win if you can’t, but you’re going out and competing for the No. 9 team. That’s our goal and we’re going to race them like we have all year.

“We’re at this point of the season, we know what to bring to the track. We’re not going to have any issues.”

.@DanielHemric it’s been great racing you from the start. Ton of respect for how you go about it and what you’ve taught me. Let’s go race hard ?? pic.twitter.com/Jc1BhS4GQg