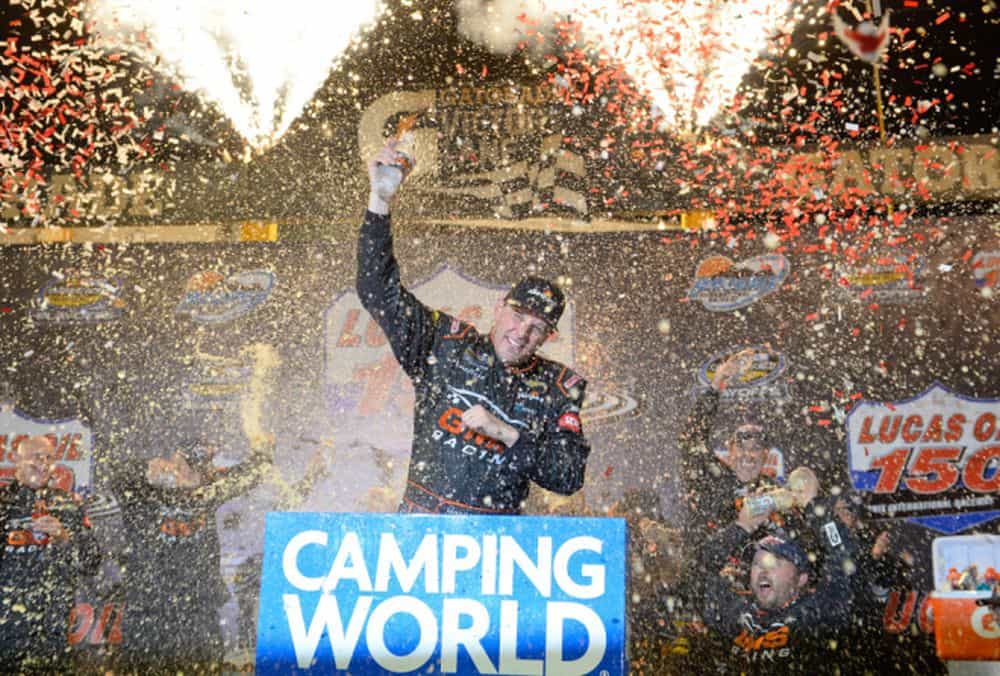 Last season, Johnny Sauter was the Camping World Truck Series title favorite. He won a pair of races in the playoffs heading into the championship at Homestead-Miami Speedway.

Fast forward a year later and the NASCAR veteran appears primed to do it again.

2017 has also seen better results for the reigning champion than his championship campaign. Through the opening 22 races, Sauter has four victories (compared to three in 2016). He’s led 455 laps, over three times the amount from his entire 2016 season. The No. 21 team also has 18 top-10 finishes, the same number Sauter had coming into Homestead a year ago.

Sauter is looking to become the second driver to win back-to-back Truck Series titles. In 2013 and 2014, Matt Crafton became the first driver in series history to pull it off, but that was without the playoff format. For the No. 21 team, surviving twice would be impressive under this three-round format.

“Winning a championship was big and I think winning a second would be the ultimate, especially if you can do it back-to-back,” Sauter said Thursday on Championship 4 media day. “Knowing how hard it is to win and how things have to go right, there are so many things that happen that are out of your control.”

Though Sauter has already tasted the celebratory championship champagne, he understands the magnitude of the moment going into Friday night’s Ford EcoBoost 200.

“I feel pressure, more for my guys and my team and everybody,” Sauter said. “Of course we want to win the championship. If anyone is sitting here and telling you they don’t feel any pressure then I call baloney. It’s just because you want to perform and you want to get the job done. I feel a little bit.

“At the end of the day, all you can do is give 100 percent and it’s either going to work out or it’s not. That’s really how I feel about it. I’m motivated and feeling a little bit of pressure, but we want to go out and do what we set out to do at the beginning of the year and that’s win the championship.”

This season, Sauter has been victorious at Dover International Speedway and Chicagoland Speedway along with the past two races. Outperforming main rival Christopher Bell last round, the No. 21 team enters Homestead with momentum on its side.

In last season’s championship race, Sauter started 19th and raced all the way up to third. He finished four positions ahead of Crafton to claim the championship in his first season at GMS Racing.

Now, GMS is poised to go two-for-two with Sauter behind the wheel. But despite such early success, Sauter is not surprised at the evolution of GMS Racing in its five years of existence.

“When Mike Beam first called me to come other there, I took a tour of the shop and saw just exactly what they were building over there,” Sauter elaborated. “Then I got to meet Mr. [Maurice] Gallagher and the family and they were serious and said all the right things. They had a realistic expectation of where they wanted to be and how they were going to get there.

“When I tour the shop, I look around and go, ‘This is really unbelievable.’ The way they go about it – building their own chassis, hanging their own bodies and all that. They are all in. On the flip side, they expect results. I think they have a real good plan of where they are heading.”

In 10 career truck starts at Homestead, Sauter has an average finish of 10.8, winning the event in 2011.